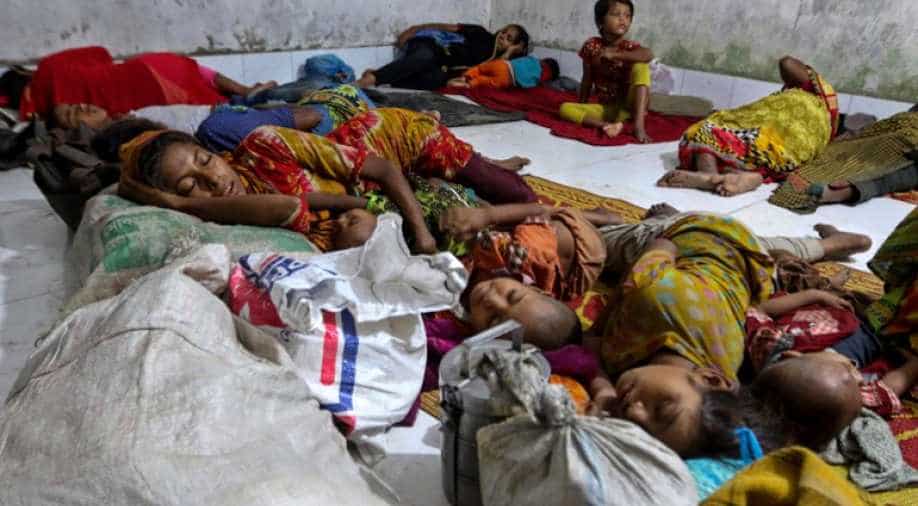 Bangladeshi villagers sleep in a cyclone shelter following an evacuation by authorities in the coastal villages of the Cox's Bazar district. Photograph:( AFP )

Cyclone Mora has hit Bangladesh coast at 6:00 am Bangladesh time and has started crossing Cox's Bazar and Chittagong||The Met Office has cautioned, the wind speed within 64 kilometres of the landfall of the cyclone will be between 89 and 117 kilometres per hour

Cyclone Mora has hit Bangladesh coast at 6:00 am Bangladesh time and has started crossing Cox's Bazar and Chittagong.

The Met Office has cautioned, the wind speed within 64 kilometres of the landfall of the cyclone will be between 89 and 117 kilometres per hour.

Evacuation plans have been underway in 19 districts along the coastal regions of Bangladesh where cyclone Mora is feared to make a landfall. Disaster management authorities have moved nearly 300,000 people to cyclone shelters.

All flights to Chittagong and river transports in Bangladesh have been suspended until further notice ahead of the cyclone.

Maritime ports in Chittagong and Cox's Bazar of Bangladesh have been advised to hoist great danger signal 10, which means from here on the threat is at the highest level. Earlier yesterday, the Met Office in Bangladesh apprehended the threat level as moderate which intensified late evening yesterday.

Cyclone Mora is feared to hit southeastern parts of Bangladesh, more likely between Chittagong and Cox's Bazar and also have effects in the southwestern parts of the country.

"The cyclone will cross Bangladesh in the morning and there will be storm surges," warned Shamsuddin Ahmed, chief of Bangladesh Meteorological Department in Dhaka.

He continued, "Heavy rainfall is likely. After crossing the Bangladesh coast, the cyclone will move towards north eastern regions like Mizoram, Manipur and Meghalaya region. There may be some flash flood over those regions too."

The Met Office has cautioned, the wind speed within 64 kilometres of the landfall of the cyclone will be between 89 and 117 kilometres per hour.

"The cyclone is stronger than Sidr, but its threat level is not negligible. We have issued great danger signal number 10 because of the wind speed. The sustaining wind speed can have damage and disastrous effect," Ahmed told WION.

Bangladesh has had devastating effects on livelihood from cyclone Sidr in 2007 and cyclone Aila in 2009. Many lives were lost, arable lands and properties were washed away in the tropical cyclones.

Cyclone Mora has originated at the Bay of Bengal and is fast gaining strength. The cyclone is apprehended to cause damages and affect people in the islands and coastal belts along the region.

Although damages are imminent it is too early to predict the extent of it, Ahmed told WION. Authorities at the disaster management, however, said they are prepared better than in the earlier tropical cyclones.

The Indian Navy has confirmed that it has kept its Eastern Fleet at the highest level of readiness to assist Bangladesh if required, reports the Asian News International.