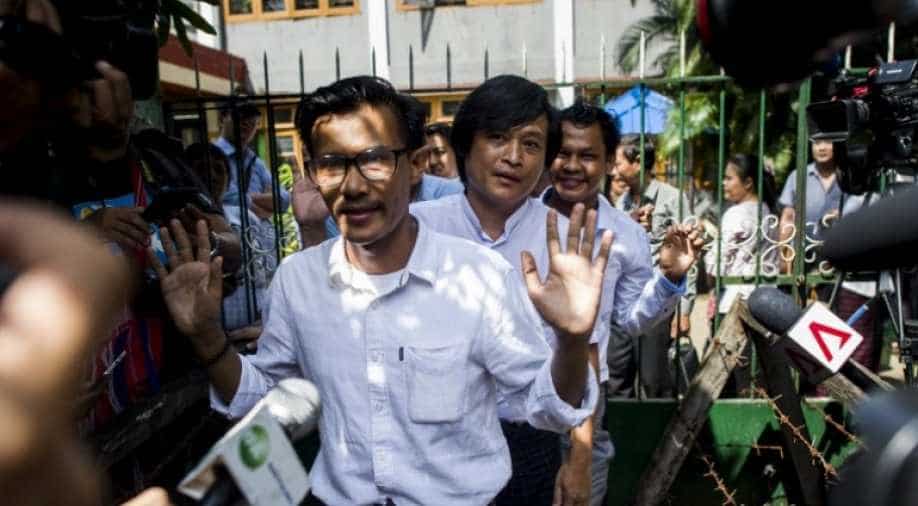 Eleven Media's executive editors Kyaw Zaw Lin and Nayi Min and chief reporter Phyo Wai Win were arrested in October but allowed out on bail after a few weeks in detention.

The incitement case against three Myanmar journalists who reported critically on the financial management of Yangon's government has been withdrawn, their lawyer told AFP Friday, in rare good news for the country's beleaguered press.

Eleven Media's executive editors Kyaw Zaw Lin and Nayi Min and chief reporter Phyo Wai Win were arrested in October but allowed out on bail after a few weeks in detention.

They were accused of incitement after an article raised questions about budgeting within the city government, which is run by Phyo Min Thein, a close confidante of civilian leader Aung San Suu Kyi.

Article 505 (b) criminalises published or circulated information that causes "fear or alarm to the public".

The case prompted an outcry amid fears of declining press freedom in Suu Kyi's Myanmar and was lodged weeks after Reuters reporters Wa Lone and Kyaw Soe Oo were sentenced to seven years on state secrets charges while reporting on a massacre of Rohingya Muslims.

But the lawyer for Eleven Media's staff said the Yangon government had sent a letter to the court asking to drop the charges and take up their grievance through arbitration at Myanmar's Press Council.

"The judge allowed them to withdraw and gave a verdict (Friday) right away. So the case is finished," lawyer Kyee Myint told AFP.

In an interview on Thursday, however, Phyo Min Thein told state media the city government would seek a correction through the council, and could resume the legal tack if it was not satisfied with the outcome.

"If they do not follow and if negotiation by the press council is not a success, we will continue this case legally," he said.

Cases against journalists in Myanmar have further tarnished the reputation of one-time rights icon Suu Kyi, whose legacy fell apart during the Rohingya crisis.

Suu Kyi has said little in defence of the Reuters journalists, who will have spent a year in prison next month. They are appealing.