Bangladesh suppliers to H&M, Next lay off workers after wage protests 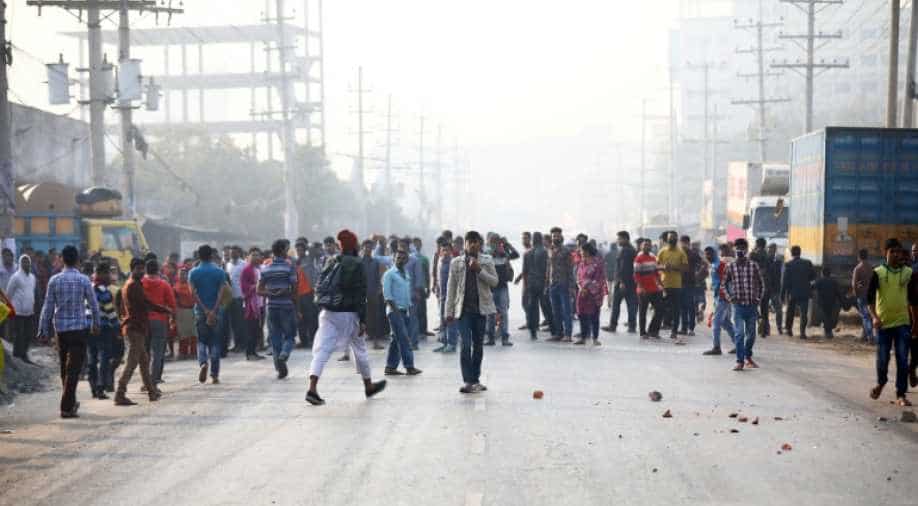 Garment workers block a road as they protest for higher wages at Ashulia, outskirt of Dhaka. Photograph:( Reuters )

The layoffs come after days of protests and clashes between police and workers in January that prompted the government to intervene and compel manufacturers to raise wages.

At least three garment manufacturers in Bangladesh that supply European brands such as H&M and Next have laid off thousands of workers weeks after they had joined wage protests, union leaders said on Tuesday.

The layoffs come after days of protests and clashes between police and workers in January that prompted the government to intervene and compel manufacturers to raise wages.

"Workers who chanted slogans or left factories and joined in processions to demand wage increases, and the ones who have any link to trade bodies, are now losing jobs," said Kazi Ruhul Amin, head of the Bangladesh Garment Workers' Trade Union Center.

Babul Akhter, head of the Bangladesh Garment and Industrial Workers Federation, said at least 7,580 workers from 27 factories had been laid off in recent weeks.

Bangladesh's $30 billion readymade garments industry accounts for 80 per cent of the country's exports, making it the world's second-biggest garment exporter after China.

Siddiqur Rahman, head of the Bangladesh Garment Manufacturers' and Exporters' Association, said workers accused of vandalism during the protests "and other destructive acts are facing charges and will have to face punishment."

Some workers said they had protested peacefully and lost their jobs because they tried to unionise other workers.

"I was surprised when I saw my name at the top of the list," said one woman who asked not to be identified.

"During the protests, I came to work every day. And I was never involved in any rampage or wrongdoing," she said. "My name and my fellow workers' names were included because we had tried to form a union."

A senior official in Bangladesh's Ministry of Labour and Employment declined to comment on the layoffs.

The garment makers list Sweden's H&M and British clothing retailer Next as clients on their websites.

Crony and Metro were not immediately available for comment.

Aminul Islam, chief administrator of East West, said some workers attacked the factory and destroyed assets on January 7. He said more than 800 of its 6,500 workers had been suspended after the incident.

Harun Ur Rashid, chairman of East West Group, said the company was "not do anything illegal or unjust" when asked about layoffs at the firm.

"We know if we do that, then buyers will not take this lightly and they will not like it," he said.

Foreign brands said they are closely watching the situation in Bangladesh.

"Next is aware of the situation - and its directly-employed audit staff on the ground in Bangladesh are currently investigating this matter," the retailer said in an email.

H&M said it "regards freedom of association to be a non-negotiable human right," and that it is "deeply concerned by the recent events in the Bangladeshi textile industry."

Other European brands such as Zara, Mango and US brands Guess and Saks - which are listed as clients by one or more of the three Bangladeshi garment firms - did not immediately respond to requests for comment.