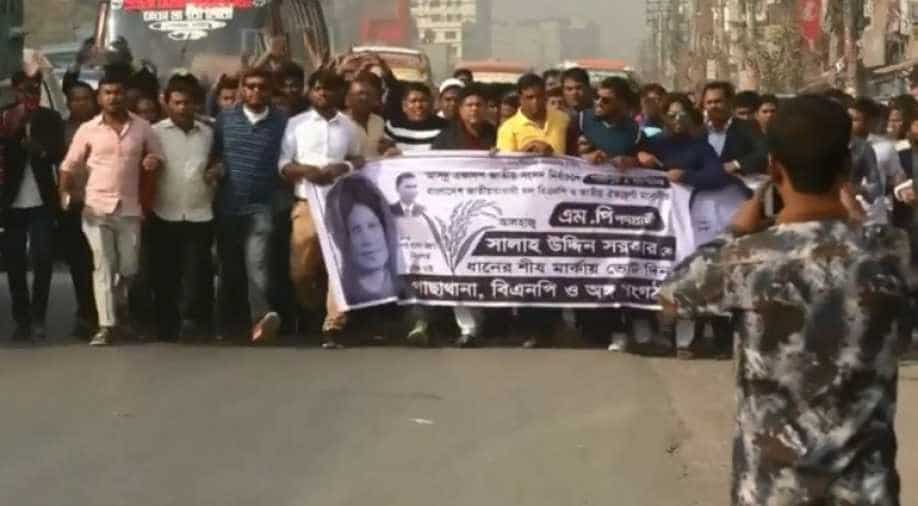 Bangladeshi elections are often violent and marred by ballot-stuffing and voter intimidation.

As tension soared before the general election on December 30, Bangladesh Nationalist Party started their campaign at Gazipur district in Dhaka division on Saturday.

"The ruling party is not allowing the opposition parties to come out on the street to campaign. No rally, no meeting, they want to do that so they are the only ones to campaign, to make a one party election and to come into power again. But the people of Bangladesh will not allow this, they are with us," she said.

He was attacked in the city while he was coming back from a mausoleum in Mirpur to pay tributes to intellectuals Killed in the 1971 independence war with Pakistan.

Though the leader was unhurt, his twelve supporters were injured in the incident.

The Oikyafront was formed on October 13 with the demand of holding a national election under a neutral government after the dissolution of parliament and release of BNP chairperson Khaleda Zia from jail.

Bangladeshi elections are often violent and marred by ballot-stuffing and voter intimidation.

Hasina, the daughter of Bangladesh's independence hero Sheikh Mujibur Rahman, is the longest-serving leader in Bangladesh's history and is seeking a third straight term.

She began a second term in 2014, after an election boycotted by the Bangladesh Nationalist Party.

Until two months ago, the BNP was in disarray following the jailing in February of Khaleda, on charges she said were politically motivated.

But the BNP joined hands with smaller parties to form the alliance led by Hossain in October, setting the stage for a more competitive race.