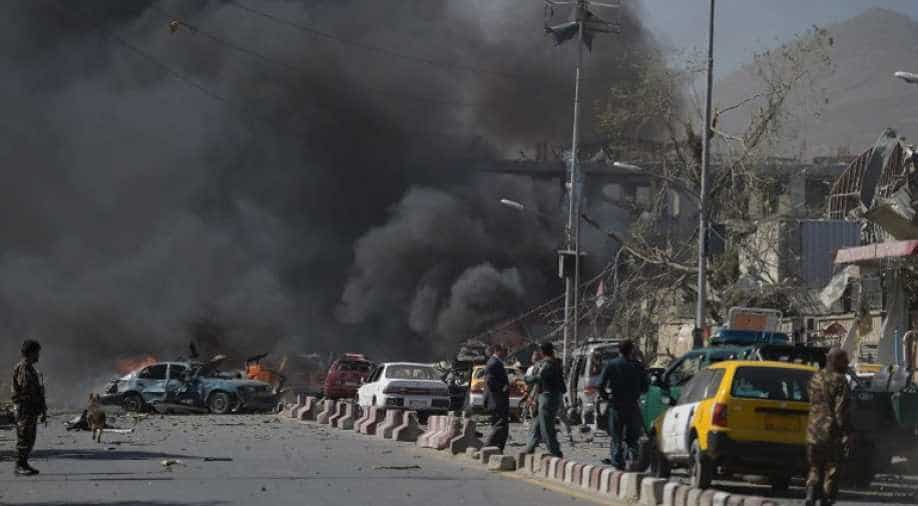 A powerful bomb hidden in a sewage tanker exploded in the morning rush hour in the centre of the Afghan capital on Wednesday, police said, killing at least 80 people, wounding hundreds and damaging embassy buildings.

The victims appeared mainly to have been Afghan civilians.

The bomb, one of the deadliest in Kabul and coming at the start of the holy month of Ramadan, exploded close to the fortified entrance to the German embassy, wounding some staff, German Foreign Minister Sigmar Gabriel said.

One Afghan security guard was killed and others were likely among the dead, Gabriel said. A spokeswoman for the German foreign ministry said the bomber's target was unknown.

However, the area is home to other embassies and government offices so the precise target of the attack was not immediately clear. A French minister said French and German embassies were damaged in the blast.

"Such attacks do not change our resolve in continuing to support the Afghan government in the stabilization of the country," Gabriel said.

A big explosion went off in the Afghan capital, Kabul caused by a car bomb near the German embassy killing several and wounding many others officials said. (Reuters)

By God's grace, Indian Embassy staff are safe in the massive #Kabul blast.

We strongly condemn the terrorist blast in Kabul. Our thoughts are with the families of the deceased & prayers with the injured.

"It was a car bomb near the German embassy, but there are several other important compounds and offices near there too. It is hard to say what the exact target is," Basir Mujahid a spokesman for Kabul police said.

Witnesses said dozens of cars were blocking roads and some wounded people could be seen. There was no immediate claim of responsibility.

The blast sent clouds of black smoke spiralling over the centre of the city in an area near the presidential palace and foreign embassies.

Houses hundreds of metres away from the blast were damaged with windows and doors blown off their hinges.

The Indian embassy in Kabul was attacked in 2008 by a suicide bomber. The bombing killed 58 people and wounded 141.

The Islamic State group has claimed responsibility for several recent bombings in the Afghan capital, including a powerful blast targeting an armoured NATO convoy that killed at least eight people and wounded 28 on May 3.

The explosion will add pressure to the fragile government of President Ashraf Ghani, which has faced mounting discontent over its inability to control the insurgency and provide security for Afghan citizens.

The Taliban have been stepping up their push to defeat the US-backed government. Since most international troops withdrew at the end of 2014, the Taliban have gained ground and now control or contest about 40 per cent of the country, according to US estimates. Ashraf Ghani's government, however, holds all provincial centres.

US President Donald Trump is due to decide soon on a recommendation to send 3,000 to 5,000 more troops to bolster the small NATO training force and US counter-terrorism mission now totalling just over 10,000.

The commander of US forces in Afghanistan, General John Nicholson, told a congressional hearing this year that he needed several thousand more troops to help Afghan forces break a "stalemate" with the Taliban.