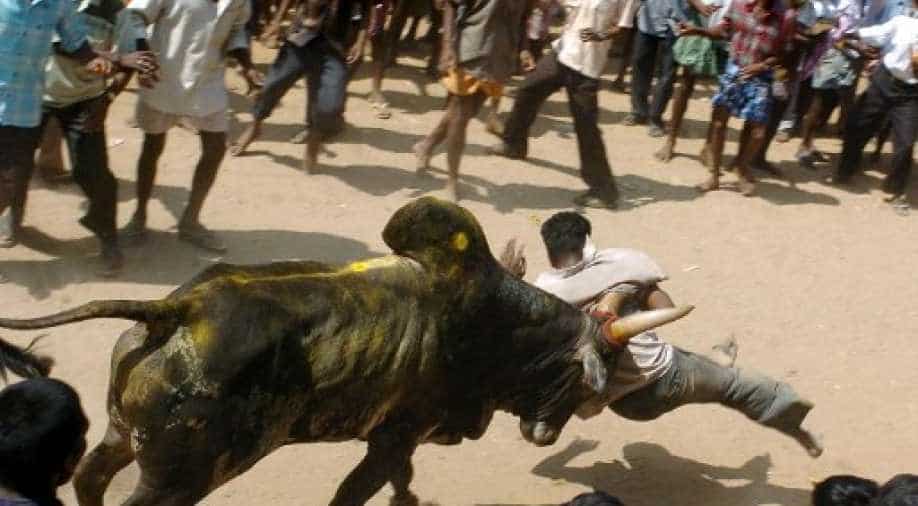 Jallikattu, an annual harvest season sport, was banned by India's Supreme Court in May 2014 over animal cruelty concerns. Photograph:( AFP )

People in India's southern Tamil Nadu state detained at least 30 supporters of Jallikattu, a traditional bull-taming sport that was outlawed by the country's highest court in 2014 over animal cruelty concerns.

A heavy security apparatus has been deployed in three districts of Madurai -- Avaniapuram, Palamedu and Alanganallur -- to prevent further spiralling of events.

Indian news agency ANI reported that police had to resort to baton-charge to disperse the supporters of the banned sport in late Saturday morning.

The supporters have been resolute in their decision to host the sport, which is played during the annual harvest festival of Pongal in South India, despite the ban imposed three years back.

The agitation took place two days after the Supreme Court refused to lift the ban on the sport amid wide demonstrations conducted by political parties in Tamil Nadu. On Wednesday, the court said it was not possible for them to revoke the restrictions on the sport before Saturday, when Pongal starts.

On Friday, villagers of Karisalkulam near Madurai unleashed five bulls into the ground for a few minutes in a symbolic protest against both the Supreme Court and the government of India.

The federal government had also prohibited use of bulls during Pongal festival, a restriction that was again upheld by the country's highest court.

Animal rights activists cite animal cruelty because the bulls are deliberately placed in a terrifying situation and the villagers use their strength to tame them.

Advocates of the sport say the sport is an intrinsic part of their cultural identity. In this sport, young men get into the ring with bulls with an aim to subdue them.

Earlier this week, some 20,000 people in Chennai -- Tamil Nadu's capital city -- took to the streets to protest the ban on Jallikattu.

The political parties have also stridently slammed the federal government for doing little to subdue the negative swirl around the sport. Senior Tamil political leader M K Stalin had led a protest in Chennai yesterday in this regard as he targeted Prime Minister Narendra Modi for allegedly not giving time to lawmakers to discuss the issue.