At least 30 Afghan civilians killed in US air strike: Officials 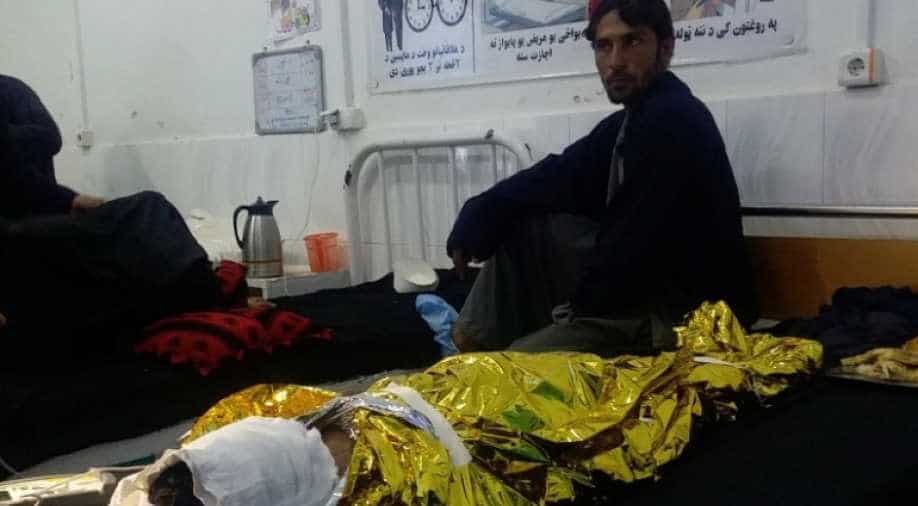 An Afghan boy receives treatment at a hospital after an airstrike in Helmand province Photograph:( Reuters )

Afghanistan's NATO-led force said Afghan government forces and US advisers came under fire from Taliban fighters in a compound in Garmsir district and called in an air strike, but the ground forces were not aware of any civilians in or near the compound.

At least 30 Afghan civilians were killed in US air strikes in the Afghan province of Helmand, officials and residents of the area said on Wednesday, the latest casualties from a surge in air operations aimed at driving the Taliban into talks.

Afghanistan's NATO-led force said Afghan government forces and US advisers came under fire from Taliban fighters in a compound in Garmsir district and called in an air strike, but the ground forces were not aware of any civilians in or near the compound.

A resident of the area called Mohammadullah said the clash began late on Tuesday.

"Foreign forces bombed the area and the bombs hit my brother's house," he said.

He said women and 16 children were among the dead.

Another resident, Feda Mohammad, said some victims were still buried in the rubble of the compound.

"The area is under the control of Taliban but all of the victims of last night's bombing are civilians," he said.

The NATO-led Resolute Support forces said Afghan forces and US advisers came under fire from Taliban equipped with machines guns and rocket-propelled grenades.

"At the time of the strike, the ground force was unaware of any civilians in or around the compound; they only knew that the Taliban was using the building as a fighting position," a force spokeswoman said in a statement.

"We investigate every credible allegation of error and review every mission to learn, adapt and improve," she said.

The deaths are the latest in a growing civilian casualty toll caused by air strikes and underline the severity of the Afghan war even as moves to begin peace talks have picked up with contacts between US peace envoy Zalmay Khalilzad and Taliban representatives.

The United Nations said last month the number of civilian casualties from air strikes in the first nine months of the year was already higher than in any entire year since at least 2009.

The increase has come together with a sharp jump in the number of air operations under a US strategy aimed at stepping up pressure on the Taliban to force them to accept a negotiated end to the 17-year war.

According to figures from the US military, US aircraft had released 5,213 weapons by the end of September, up from 4,361 for the entire 2017 and the highest number since 2011 when there were more than 100,000 US troops in Afghanistan.