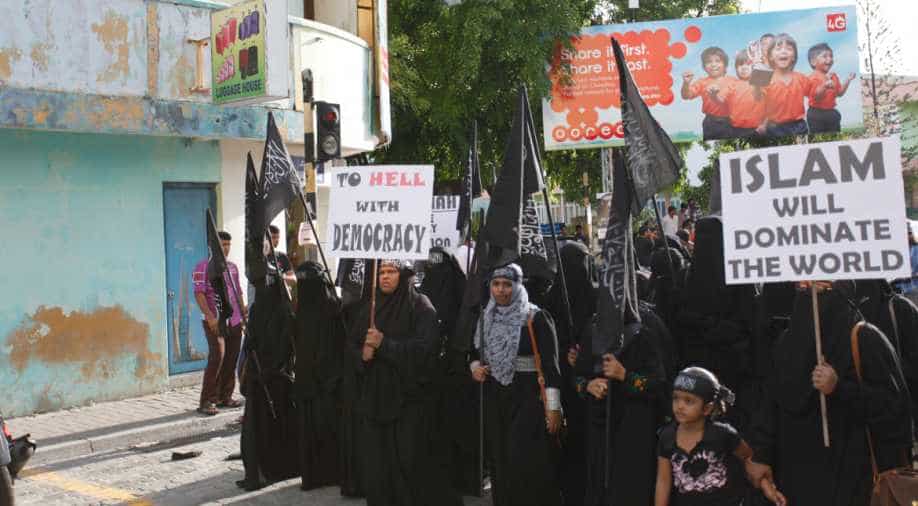 Ever since Abdullah Yameen was elected as the President of the Maldives in November 2013, there has been quite a bit of traffic between the heavenly archipelago and the Kingdom of Saudi Arabia.

Officials from each country are seen making frequent visits to the other. And, these are not vacation tours, at least not entirely. They are all about business and politics, big business and big politics.

Businessmen from the Kingdom and members of the royal family (House of Saud) itself are increasingly investing in the Maldives, a country which depends extensively on international investments to keep its economy going. And more investment also means more influence for Saudi Arabia.

After securing a massive project for the construction of a new passenger terminal for the Maldives international airport, the construction conglomerate Saudi Binladin Group - founded by Osama Bin Laden's father - leads the Saudi investment front.

The airport's new wing is part of an ambitious plan the Maldives government launched in 2014, a $800-million investment meant to boost the archipelago's tourism sector. Part of the funding will come from the Saudi Fund for Development, a government managed fund formally meant to support developing countries and often used as an instrument of influence and soft power.

Awarding the contract to the Binladin Group was controversial right from the word go. The same contract had previously been allotted to MGR, a major Indian infrastructure company which is seeking $1 billion as compensation from the Maldives government for not respecting a valid contract.

In 2014, no less than Saudi Arabia's King Salman bin Abdulaziz Al Saud, crown prince back then, donated $1 million to the Maldives ministry of Islamic affairs and $1.5 million for health initiatives. He also promised to build ten "world-class" mosques in the country, the biggest of which will be in the capital city of Malé: a six-storey structure which can hold 6,000 people.

It was again the Saudi Investment Fund which gave the Maldives $1 million to conduct a feasibility study for building a transhipment port and an attached Special Economic Zone in 2015.

In March 2016, Adam Shareef Umar, the Maldivian defence minister, travelled to Saudi Arabia to meet his counterpart, deputy crown prince Mohamed Bin Salman al-Saud, who pledged $50 million for a military housing project in Maldives. As the world has learnt from China, infrastructure development is the most surefire away of exerting influence on countries.

The role of Islam

It is not only profit which brings the two countries together. The Maldives are a Muslim nation by constitution, the population mostly Sunni. After the election of President Abulla Yameen, religion has increasingly stepped out from its traditional private sphere to make its effect felt in public life.

This change matches Saudi Arabia's aspiration to become the most influential actor among all Sunni - if not Muslim - countries in the world, an ambition that Iran's growing influence in West Asia has negatively impacted.

In November 2015, the Maldivian President invited the Saudi Islamic affairs minister Saleh bin Abdulaziz with the aim of building a "religious bridge" between the two countries. Saudi Arabia agreed to help the Maldives in collection of Zakat (an Islamic tax), in translating books on Islam into English, to send preachers across and to host and provide religious education to Maldivian scholars.

In the same year, for the first time ever, Saudi Arabia opened its first diplomatic mission in the archipelago.

In January 2016, Abdullah bin Mohamed bin Ibrahim Al-Sheikh, the first speaker of the King-nominated Saudi's Shura Council to visit the Maldives, announced the formation of a joint committee to address issues of mutual interest. He also donated $100,000 to the recently established Islamic University of Maldives.

The Saudi religious influence in the Maldives translates ultimately into the spread of Wahhabism. The hardline doctrine is, in fact, the Kingdom's official belief and is changing the common perception of Islam in the Maldives, where people had practised a traditionally and majorly tolerant version.

Beside being a perfect holiday destination, the Maldives' location in the middle of the Indian Ocean makes the archipelago a strategic foothold for Saudi Arabia, which is using all its means to cement its position.

The Kingdom's influence in the Maldives has become so strong that for the first time in its history, the country has been pulled into the boiling cauldron of Sunni-Shia rivalry. In May 2016, the Maldives became the first Asian nation to sever its diplomatic relations with Iran after 41 years, without any solid reason. Saudi Arabia did the same in January.

On a similar note, it is worth remembering that the Maldives are a member of a 34-country military coalition led by the Saudis which is aimed to fight terrorism, at least on paper. In this alliance, there is no place for Iraq, Iran and Syria, all Shia-led countries.

It seems the struggle for hegemony of the Muslim world, till now mainly restricted to West Asia, is spreading to faraway lands.