An Honour Code for Tyranny 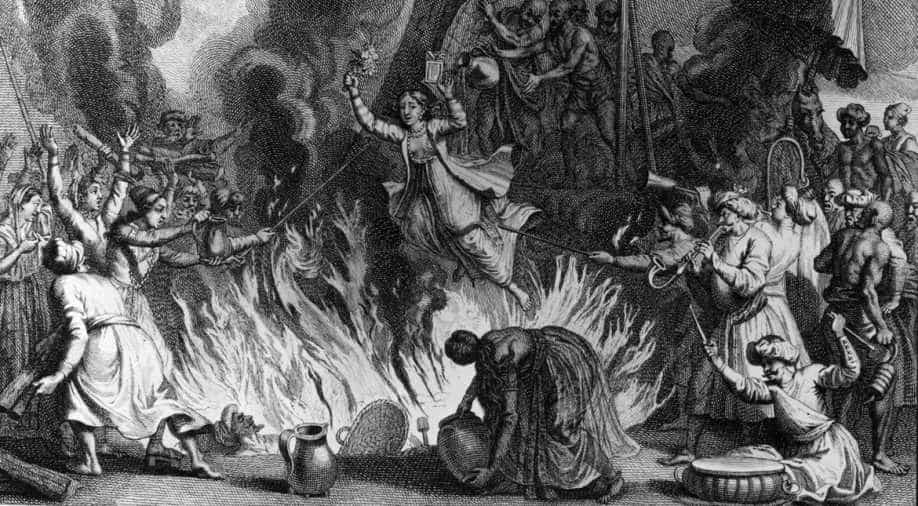 Representation of an Indian woman practising the obsolete tradition of sati in which she burns herself to death on her husband's funeral pyre. Photograph:( Getty )

This year at the Oscars, A Girl in the River: Price of Forgiveness caught the world’s attention. It was based on the true story of Saba Qaiser, an 18-year-old Pakistani girl who was shot in the face by her father and her uncle for eloping with a man she loved- but she survived. Nevertheless, her father was proud of his gruesome act, and felt strongly it earned him the respect of his community. The poignant tale narrated in this documentary is commonplace in South Asia in most cases such instances are treated with absolute impunity.

When “male honour” is accorded supreme status, punishing any perceived breach with something otherwise flagrantly criminal and perverse is permitted by society in many such instances. At a screening of the film in his own residence Nawaz Sharif, Pakistan’s Prime Minister, stated,”there is no place for killing in the name of honour in Islam, and anyone who does it should be punished severely”. He said there was an urgent need to amend the law.

Recently, in the aftermath of the killing of a teenager, Zeenat Rafiq, who married against her family’s wishes, an Islamic religious body in Pakistan condemned honour killing, termed it “unethical” and “unjustifiable”. The General Secretary Mufti Saeed Rizvi of The Sunni Ittehad Council (SIC) mentioned, “women are free to marry whomever they choose, if consented”. He further added the root cause of honour killing is “illiteracy” and not religion. Killing of women in the name of “honour” is “un-islamic”. Around 40 clerics issued fatwa against honour killing. The clerics requested the government to draft a new legislation and stated, “those guilty should be punished within a week”. This was the third reported incident of honour killing in Pakistan since April. Unfortunately, most cases of honour killing remain unreported due to the influence of society and culture on the rule of law.

The saga across the border

The prevalence of honour killing as a cultural practice is deeply pervasive in India as well. On March 13, 2016, in a small Indian village called Udumalaipett, a young Dalit man named Shankar was attacked by three unidentified men armed with sickles. He died en route to the hospital. Shankar was targeted for marrying an upper caste Hindu girl. The National Human Rights Commission (NHRC) stated, “the incident is a serious concern of safety especially for lower castes”.

Tamil Nadu has seen 81 honour killings over the last three years. Unfortunately honour killings, though often reported, usually do not end up in conviction. The family who have perpetrated the honour killing tell authorities the victim committed suicide, so it isn’t registered officially as a murder. The Tamil Nadu government has also dismissed the incident of honour killings. The state failed to submit its report on honour killings to the Supreme Court.

Around 80 per cent of honour killing victims are women. According to Mr. A Kathir, the managing director of Evidence, a Tamil Nadu-based NGO, “84 per cent of Dalit women are into inter-caste marriage face humiliation due to marital discord”. In 2007, there were 30 incidents of honour killing reported in just the western district of Tamil Nadu. Caste-based politics encourage a culture of mob violence. Such practices are only gaining in popularity, as the community considers this heinous crime heroic.

Religion also plays a pivotal role in rationalising honour killing. Therefore, it is imperative that a policy measure aiming to tackle the problem is premised on a multi-causal understanding of the problem and employs multi-pronged approaches towards solving this societal evil.

Women are at risk of being victims of honour-based crime wherever a woman’s life means less than the locale’s conception of honour. The Supreme Court in Lata Singh vs. State of UP & Another observed, “there is nothing honourable in honour killings. They are barbaric and brutal murders by bigoted, persons with feudal minds”. The apex court further added, “young couples fall in love to seek shelter in police lines or protection homes, to avoid the wrath of kangaroo courts”. Despite the observation of the apex court, the practice remains unchecked to a large extent and the influence of such brutal “kangaroo courts’ is being further emboldened.

The issue has received the attention of international community as well but measures taken thus far have remained ineffective to say the least. In 2001, the UN General Assembly urged for effective laws to fight honour killing in their first specific resolution on the topic. In 2002, the Special Rapporteur to UN reported the presence of honour killings in Jordan, Lebanon, Morocco, Pakistan, United Arab Emirates, Turkey, Yemen and other Persian Gulf countries. In the West, France, Germany and UK were listed, where the practice is prevalent among migrants. In 2010, UK police claimed that honour-related crime in Britain increased by 47 per cent. As many as 2283 cases were reported from cities with high immigrant populations.

The United Nations High Commissioner for Human Rights (UNHCHR), recognised honour killings as an extreme symptom of discrimination against women. The then Chief of UNHCHR, Navi Pillay, claimed that the state institutions fail them and that honour killing isn’t featured prominently enough in the news. The General Assembly, in three resolutions (2001, 2003 and 2005), said that Member States should intensify legislative, educational, social reforms and work on other efforts to prevent and eliminate honour crimes. Despite a call for action more than 11,000 cases of honour killing were reported by UK police between 2010-2014.

According to the UN, out of 5000 reported international cases, 1000 are from India. The Hindu Marriage Disabilities Removal Act, 1946, was enacted to validate marriages between Hindus belonging to the same “gotra”, “pravara”, or different subdivisions of the same caste. The Supreme Court, in a landmark case, Arumugam Servai vs. State of Tamil Nadu, states, “caste system is a curse upon the nation and the sooner it is destroyed the better”. The apex court added that honour killing is, “taking law into your own hands and indulging in offensive activities and endangering the lives of the persons who are willing to marry as per their choice”. The practice followed by khap panchayats to restore honour was strongly lambasted by the court.

There’s been speculation on whether a separate law distinguishing honour killing from murder would help prevent honour-based crime. Unfortunately our respected lawmakers have failed to develop a nuanced understanding of the problem. P. Chidambaram, the then Indian home minister, said, “the demand for a special law is one that has been made most eloquently...the answer is not to make another law. Whatever law we make, honour killing is murder”.

There are two bills meant to deter honour-based crime that are still pending before the parliament and despite strong condemnation from select lawmakers and civil society, it is uncertain whether these bills would see the light of day anytime in the near future. In the purview of one of the bills ,Section 300 of Indian Penal Code should include "honour killings" and the burden of proof on the accused. Further, the Bills also focus on the "unlawful assemblies" held by caste panchayats to prevent marriage by choice.

The proposed Bills have been framed after careful deliberation. If we observe the pattern of honour killing, it is evident it has signs of gendered violence and the notion of shame and honour results in atrocious violence. Elements of honour crime also include status anxiety governed by social convention and honourable masculinity. As per the National Crime Statistics Bureau, from 2010-2014, 25 per cent of murders in the name of honour were reported from Madhya Pradesh.

There is an inherent fallacy in any notion that attributes 'Honour' to an act of killing. However, mere legislative change may not be able to address this societal evil. Honour killing as a concept hinges on regressive cultural mindset, lack of education and exposure and access to speedy justice. Thus, law is only one part of a larger strategy that needs to be adopted to counter this societal evil. It must be complemented with education which focuses in reconceptualising the notion of honour. For this citizenry, civil society and the law and order apparatus need to take proactive measures in initiating programs which provide self sufficiency avenues to women define honour through awareness campaigns and undertake sensitisation of law enforcement forces. We must not sacrifice the integral notion of human rights at the altar of regressive societal norms lest we may travel back in time to an antediluvian era.

A lawyer turned policy wonk who revels in breaking gender stereotypes through her speech and expression.