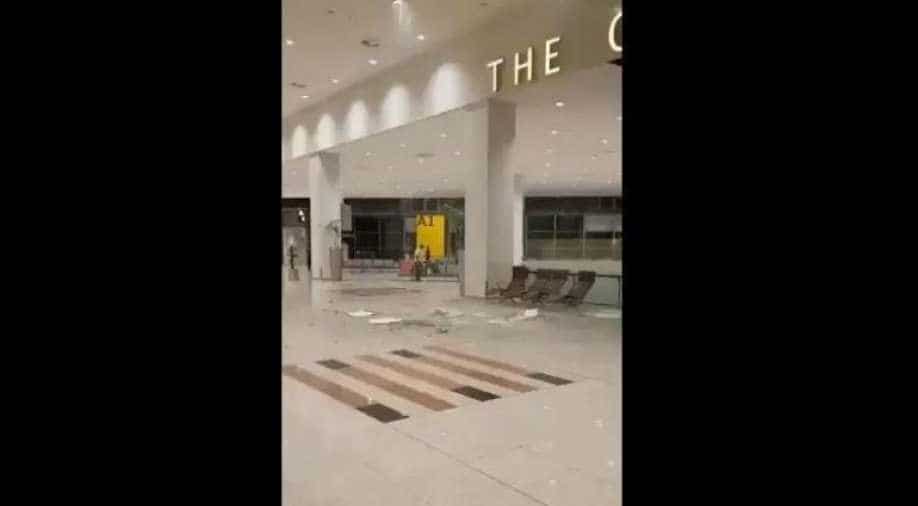 A screengrab from a video showing ceilings of Pakistan airport collapse  Photograph:( Twitter )

Qureshi had openly threatened Saudi Arabia in a TV interview and reprimanded the Organisation of Islamic Countries for apparently dragging its feet on Kashmir.

You get what you pay for. Its a commonly used phrase for Chinese products. Most of us are aware of the stellar quality of Chinese products. But Pakistan is not most of us. It is the 'all-weather' ally of China. So Pakistan let china build an airport.  The Islamabad International Airport which has been operating since 2018.

The construction of this airport was undertaken by the China State Construction Engineering Corporation. One of the largest state-owned construction companies in China. It took $ 2.6 billion and gave Pakistan one of its largest and most advanced airports.

This airport's terminal has 15 gates. Duty-free shops, air malls, food court, business centre, cinema, 42 immigration counters and now it has a leaking roof. An entire section of the ceiling at this airport has collapsed.

This was a result of incessant rains and of course Chinese manufacturing.  What's worse is that this happened on the 14th of August, independence day of Pakistan. And rainwater is still seeping through the damaged roof of the airport. According to the airport authorities, there's heavy leakage at various points now. Numerous pieces of the false ceiling have collapsed in the last 3 days. The officials are struggling to flush the water out. The 'all-weather' China-Pakistan friendship seems to have failed the test of monsoon.

Bajwa's visit is only aimed at fixing the ruining relationship between the two countries. He's there to calm things down. Saudi Arabia has already forced Pakistan to pay back 1 billion dollars. Now it is demanding another billion dollars from the 3.2 billion loans Islamabad borrowed. Things don't look good. Both for Pakistan-Saudi ties. And for the man responsible for ruining to some extend them is Shah Mahmood Qureshi, the motor-mouth foreign minister of Pakistan.

Qureshi had openly threatened Saudi Arabia in a TV interview and reprimanded the Organisation of Islamic Countries for apparently dragging its feet on Kashmir. Qureshi's activism has led him to the brink of an ouster. There are unconfirmed reports that shah Mahmood Qureshi may lose his post as the Pakistan foreign minister. Islamabad is likely to sacrifice this leader in its attempts to mend damaged relations with Riyadh. Who are they going to replace him with?. So far -- Shireen Mazari -- the human rights minister of Pakistan is said to be the top choice. But nothing is confirmed yet. A leaking roof at an international airport. An army chief hiding in Saudi Arabia. A foreign minister is likely to be thrown under the bus.

It is going to be a rough week for Pakistan.