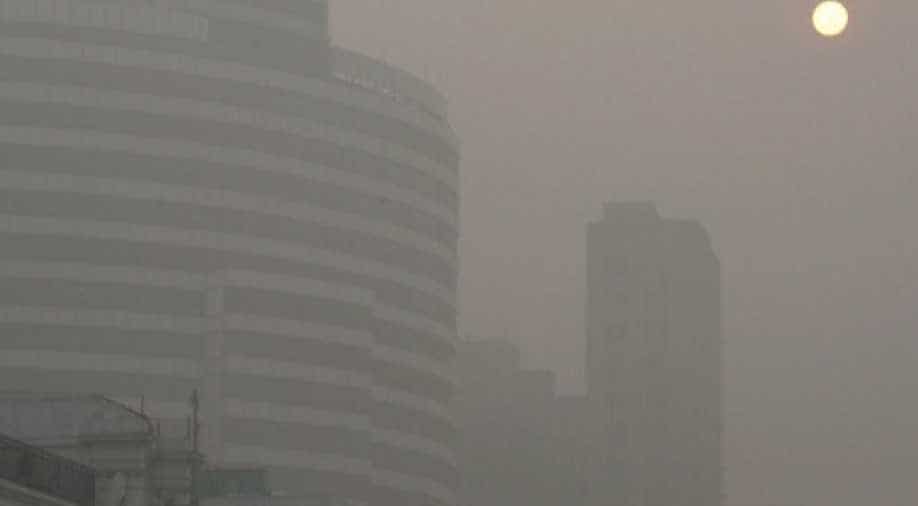 The sun appears through heavy smog in the Connaught Place area of New Delhi on November 7, 2016. Photograph:( AFP )

The National Green Tribunal today said it was mulling setting up a committee of chief secretaries of Delhi and four northern states to prepare an emergency action plan to combat the menace of air pollution.

"We propose a committee comprising chief secretaries of Delhi, Haryana, Rajasthan, Punjab and Uttar Pradesh who shall meet once in two months and prepare an action plan for implementation of directions on air pollution," a bench headed by NGT Chairperson Justice Swatanter Kumar said.

The green panel asked the state governments to classify different levels of pollution while asking the Chief Secretaries to take disciplinary action against officials who were not executing the orders on air pollution.

"It is very shocking the way people of Delhi have been treated for the last seven days. You are not able to persuade people not to burn crackers in Diwali. People were bursting crackers even on Chhath. You must credit the people of Delhi that they are so tolerant," the bench said.

The bench said the committee could meet in places like Delhi, Lucknow or Chandigarh and any decision taken in these meetings will apply to all the five states.

The NGT further proposed a sub-committee comprising secretaries of Environment, Urban development, Central Pollution Control Board, state pollution board which would report to the main committee and submit report on implementation of the decisions taken by the panel.

The bench, however, said it would pass its order on pollution matters tomorrow which would have huge inter-state implications.

It lambasted the states for not devising an effective action plan and implementing it on the ground level.

"First grievance is that NGT calls them to be present here. We will continue to do our duty and pass orders even if bureaucrats feel offended. Let this be clear to them. These days, we are getting representations from MLAs, MPs that this violation is going on and the government is not taking any action. In such a scenario, how can we not do anything," the bench said.

On the issue of sprinkling water on roads to contain the dust pollution, the Delhi government and other neighbouring states once again came under attack from the NGT which was critical of their approach of handling the situation.

"What purpose sprinkling of water on road would serve? If pollutants are in air, why were you sprinkling water on road. You can't give people water to drink and you are wasting it on road," the bench said.

Taking the Punjab and Haryana governments to task for not taking action against rampant crop burning in their states, the bench asked their counsel to take clear instructions on stopping grant of free electricity to such offenders.

"Providing free power is a very laudable step. But how can you permit the exploitation of government resources to such an extent that it causes havoc on some other community. Are you ready to make statement that grant of power to farmers who burn crop residue should be stopped forthwith," the bench said.

The NGT also enquired from the municipal corporations of Delhi about the status of inspection which it had directed yesterday and sought to know about the latest situation on pollution.

"Did any of your officers leave the seat? Don't tell us stories and get out of the phobia of filing affidavits, printing books and conducting meetings. Answer straight or face punitive action. We are not bothered which government you belong to. Did any of the officers find any violation," the bench asked.

The lawyers representing the corporations told the bench that officers went for inspection but the report is awaited.

Taking Delhi and its neighbouring states to task for not even reading its orders to curb pollution, the tribunal had castigated them and the Centre for "playing a joke" on the people by doing nothing in the first five days when toxic smog engulfed the national capital region.