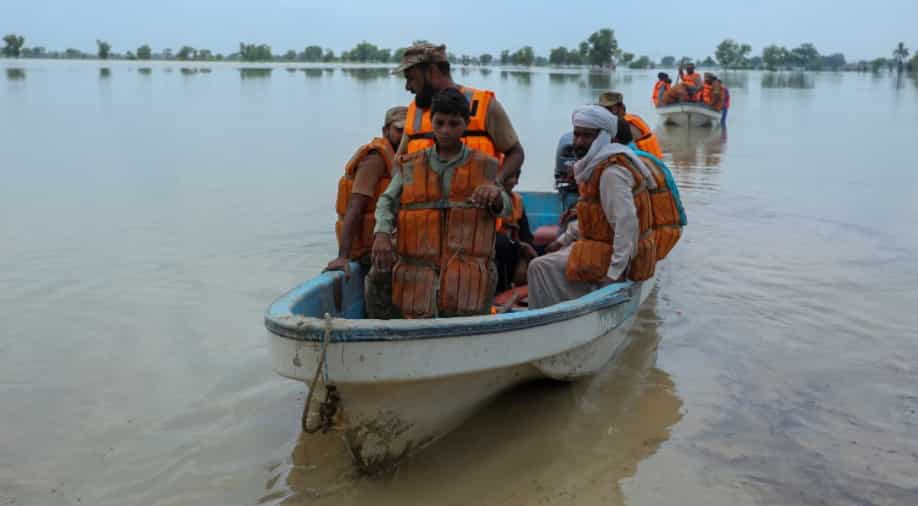 Soldiers of the Pakistan army rescue people from the flood-affected Rajanpur district, in the Punjab province of Pakistan Photograph:( AFP )

Highlighting the need for more funds, the Balochistan provincial government appealed to international organisations for assistance

With remote communities in the impoverished southwestern province of Balochistan among the hardest hit, flash floods caused by abnormally heavy monsoon rains killed at least 549 people in Pakistan over the past month.

Declaring a monsoon emergency, Pakistan's cabinet the National Disaster Management Authority (NDMA) to take as many preventive measures as possible.

During his visit to stricken areas, Prime Minister Shehbaz Sharif said "We're doing our best to provide for extensive relief and rehabilitation of flood victims."

Pakistan’s cabinet has declared a monsoon emergency but now we need to brace for the next round of rain torrents. Starting tomorrow. All provinces and district administrations, NDMA & PDMAs need to act now to take as many preventive measures as possible.

Highlighting the need for more funds, the Balochistan provincial government appealed to international organisations for assistance.

With some also disconnected from the rest of the province due to more than 700 kilometres of roads being washed away, there were food shortages in every district hit by the flooding.

According to the NDMA, the past month was the wettest in three decades, with 133 per cent more rain than the average for the past 30 years.

The disaster agency said that Iran and Afghanistan's neighbour Balochistan received 305 per cent more rain than the annual average.

A Baloch militant group claimed responsibility for the downing of Mi-17 helicopter in which a top Pakistani army general and five senior military officials were killed.