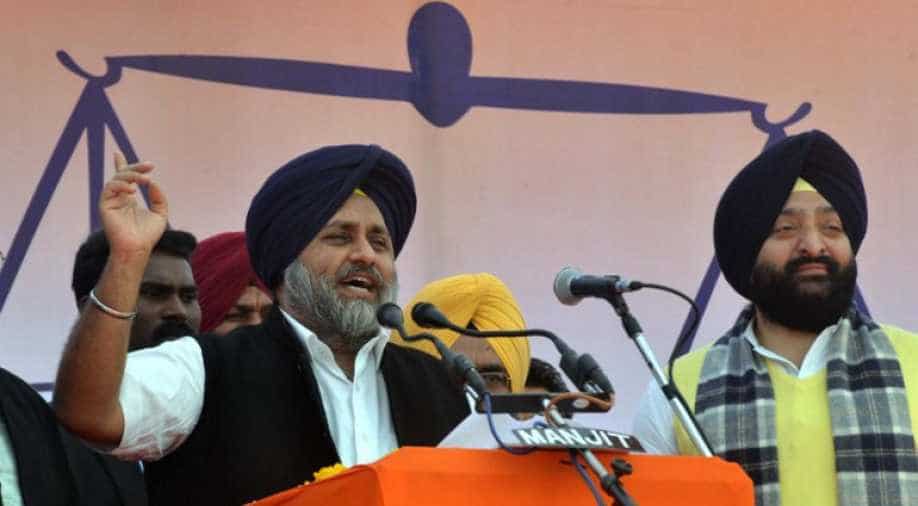 “Kejriwal is playing a dangerous game. After realising that he is losing his base, he has started aligning with radical organisations,” said Badal.

The Khalistan movement is an extremist movement which aims to carve a separate state for the Sikhs.

The Shiromani Akali Dal (SAD) president also alleged that Kejriwal is meeting people and organisations who created trouble in Punjab and propagated the idea of Khalistan, especially in the 1980s. “Recently he met RP Singh who heads the frontal organisation of Babbar Khalsa International which is a terrorist organisation,” alleged Sukhbir Badal.

He went on to say that if AAP came to power, they would hand over Shiromani Gurdwara Parbandhak Committee (SGPC) to radical groups in the state so that places of worship could be used for anti-national activities. SGPC is a body that manages places of worship for Sikh people in India's northern Punjab state.

“He is fighting against me and asks his cadre to throw stones at me. He is inciting violence,” said Badal.

"Akalis and Congress have never propagated violence but AAP does. In their rallies they propagate violence,” he further said.

He even defended his wife and federal cabinet minister Harsimrat Kaur for her statement that if Badals give a signal, the AAP would be finished in Punjab.

“Our workers have a limit. You cannot continue to attack us like this. We have video evidence to show that they are saying throw stones and break their cars. They want Punjab to be taken back to the old times,” he said.

Sukhbir Badal also attacked former chief minister of Punjab Amrindar Singh for promising voters to put an end to the culture of entitlement in Punjab. "He should first shake off his security cover because he has hundreds of guards protecting him,” Badal said.

The SAD chief also defended his decision to spruce up heritage sites on the ground that tourism has gone up in the state.

The SAD, which has an alliance with the BJP in Punjab, defended the decision of demonetisation and said that Prime Minister Narendra Modi has taken a stand against black money and people have appreciated it.

The battle of Punjab is as important as Uttar Pradesh. It has become a battle of ideas. If AAP does well, it would propel them to the national stage and if it doesn’t then it would be restricted to Delhi as a regional phenomenon. For this very reason, both Congress and SAD continue to ignore AAP as a challenger but the fact of the matter is that they are there and even if they don’t win, they have made an impact in the state, sometimes veering towards the disruptive.

The SAD is battling 10 years of incumbency in Punjab and is facing a three-pronged battle in the state for the first time after AAP threw its hat in the ring.

In the 2014 Lok Sabha elections, the AAP had surprised everyone by winning four Lok Sabha seats.