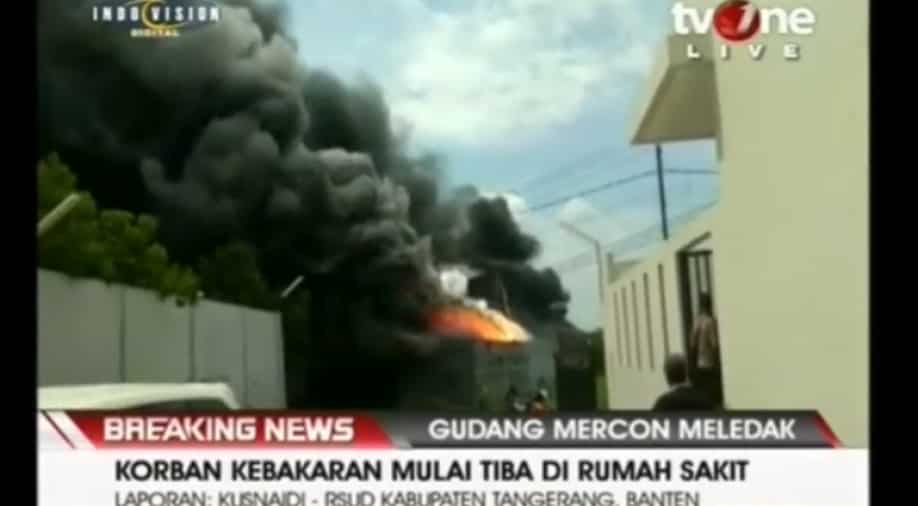 A firefighter at the scene said the victims had been burned beyond recognition. Photograph:( Reuters )

At least 47 people have been killed and dozens injured in a blaze that tore through a fireworks factory outside the Indonesian capital, police said Thursday, triggering explosions and sending plumes of black smoke into the air.

The fire broke out at an industrial complex in Tangerang, a satellite city of Jakarta.

"There are 103 workers in total at this factory, 43 are injured and being treated in three hospitals, the remains of 23 victims have been found," a local resident told a television channel.

Many of the bodies of the victims were found clustered at the back of the factory, police said, indicating there may have been a panicked rush to flee the flames.

A firefighter at the scene said all the victims had been burned beyond recognition.

Parts of the building collapsed after being gutted by the blaze, which scorched nearby cars. Witnesses reported hearing blasts erupt from the site.

Local resident Beni Benteng told AFP he heard an explosion and people inside screaming for help.

"My friends, I and some police officers knocked down a wall so people could escape, then the workers came out," he said.

"I saw people including women were jumping from above, oh my God," he added.

The blaze, which broke out in the morning, was brought under control by late afternoon and authorities were working to recover the victims' bodies from the building.

Authorities have not yet said how the fire started, but have confirmed it began near the front door and quickly spread.

"Victims were found piling at the back, it seems like they were avoiding the blaze at the front door," Afinta told Metro TV.

Desperate friends and family thronged a nearby police hospital in Keramat Kati looking for loved ones.

Video footage shot by an AFP stringer showed victims, covered in bandages, laid out on stretchers and others with minor injuries sitting in the hallways or outside.

A factory worker at the hospital in Keramat Kati said the fire erupted in the middle of production.

"I don't know how it happened, I was working outside of the factory and there were some explosions, four cars exploded and almost all motorbikes also exploded,” Ade, who suffered burns to his arms and legs, told AFP.

The factory -- part of a complex that borders a residential area -- had only been operating for six weeks, district government official Toni Rustoni told Metro TV.