Ukraine gave up a giant nuclear arsenal 30 years ago. Today there are regrets. 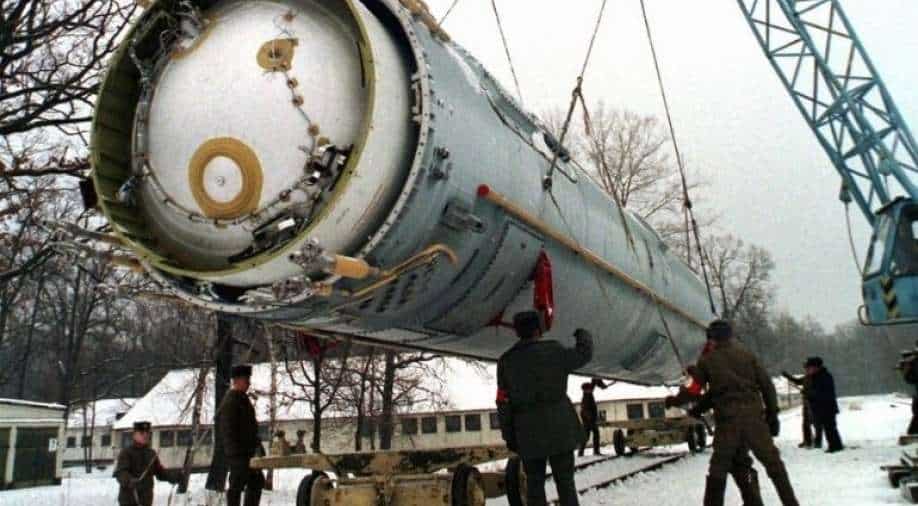 Soldiers preparing to destroy a ballistic missile at a former Soviet military base in Vakulenchuk, about 135 miles west of Kyiv, in 1997 Photograph:( AFP )

At the end of the Cold War, the third-largest nuclear power on earth was not Britain, France or China. It was Ukraine. The Soviet collapse, a slow-motion downfall that culminated in December 1991, resulted in the newly independent Ukraine inheriting roughly 5,000 nuclear arms that Moscow had stationed on its soil. Underground silos on its military bases held long-range missiles that carried up to 10 thermonuclear warheads, each far stronger than the bomb that leveled Hiroshima. Only Russia and the United States had more weapons.

The removal of this arsenal often gets hailed as a triumph of arms control. Diplomats and peace activists cast Ukraine as a model citizen in a world of would-be nuclear powers.

But history shows the denuclearization to have been a chaotic upheaval that shook with infighting, reversals and discord among the country’s government and military. At the time, both Ukrainian and American experts questioned the wisdom of atomic disarmament. The deadly weapons, some argued, were the only reliable means of deterring Russian aggression.

Today Ukraine has no easy path to producing or acquiring the materials to build a bomb. Even so, the nuclear genie is once again stirring as Russian troops encircle the nation and wage a shadow war in its easternmost provinces.

“We gave away the capability for nothing,” said Andriy Zahorodniuk, a former defense minister of Ukraine. Referring to the security assurances Ukraine won in exchange for its nuclear arms, he added: “Now, every time somebody offers us to sign a strip of paper, the response is, ‘Thank you very much. We already had one of those some time ago.’”

Western analysts say the current Ukrainian mood tends to romanticize the atomic past. “The gist is, ‘We had the weapons, gave them up and now look what’s happening,’” said Mariana Budjeryn, a Ukraine specialist at Harvard University. “On a policy level, I see no movement toward any kind of reconsideration. But on a popular level, that’s the narrative.”

“Regret is part of it,” Budjeryn, a Ukrainian native, added. “The other part is whatever one feels as a result of being subjected to injustice.”

At first, Ukraine rushed to get the Soviet arms off its soil. Bombs, artillery shells, land mines and the relatively small warheads atop short-range missiles were the easiest to relocate and most likely to fall into unfriendly hands. More difficult to move were the long-range missiles, which could weigh 100 tons and rise to a height of nearly 90 feet.

In January 1992, a month after the Soviet Union ceased to exist, Ukraine’s president and defense minister ordered military commanders and their men to pledge loyalty to the new country — a move that would exert administrative control over the remaining arms. Many refused, and the soldiers who managed Ukraine’s nuclear forces fell into a period of tense bewilderment over the fate of the arsenal and its operational status.

Volodymyr Tolubko, a former nuclear-base commander who had been elected to the Ukrainian parliament, argued that Kyiv should never give up its atomic edge. In April 1992, he told the assembly that it was “romantic and premature” for Ukraine to declare itself a non-nuclear state and insisted that it should retain at least some of its long-range warheads. A residual missile force, he declared, would be enough to “deter any aggressor.”

While his stance never gained wide support, “it compounded existing tensions,” according to a detailed history of Ukraine’s nuclear disarmament.

In the summer of 1993, John J. Mearsheimer, a prominent international relations theorist at the University of Chicago who was no stranger to controversy, lent his voice to the issue of atomic retention. He argued in Foreign Affairs that a nuclear arsenal was “imperative” if Ukraine was “to maintain peace.” The deterrent, he added, would ensure that the Russians, “who have a history of bad relations with Ukraine, do not move to reconquer it.”

In Kyiv, the government in 1993 went so far as to consider seizing operational control of its nuclear missiles and bombers. But that never came to pass.

Instead, Ukraine punted. It demanded that, in exchange for nuclear disarmament, it would need ironclad security guarantees. That was the heart of the agreement signed in Moscow early in 1994 by Russia, Ukraine and the United States.

In late 1994, the pledges got fleshed out. The accord, known as the Budapest Memorandum, signed by Russia, Ukraine, Britain and the U.S., promised that none of the nations would use force or threats against Ukraine and all would respect its sovereignty and existing borders. The agreement also vowed that, if aggression took place, the signatories would seek immediate action from the United Nations Security Council to aid Ukraine.

While Kyiv had failed to get what it wanted — the kind of legally binding guarantees that would come with a formal treaty ratified by the U.S. Senate — it received assurances that Washington would take its political commitments as seriously as its legal obligations, according to Budjeryn, a research analyst at the Managing the Atom project at Harvard’s Kennedy School.

In May 1996, Ukraine saw the last of its nuclear arms transported back to Russia. The repatriations had taken a half decade.

What undid the diplomatic feat was the “collective failure” of Washington and Kyiv to take into account the rise of someone like Vladimir Putin, Steven Pifer, a negotiator of the Budapest Memorandum and a former U.S. ambassador to Ukraine now at Stanford University, said. After Russian troops invaded Crimea in early 2014 and stepped up a proxy war in eastern Ukraine, Putin dismissed the Budapest accord as null and void.

“They’ve been fighting a low-grade war for eight years,” Pifer, who just returned from Kyiv, said of the Ukrainians. “You can’t find bullets in the stores. A lot of civilians are arming up.”

In Ukraine, the Crimean invasion and the lengthy war led to a series of calls for atomic rearmament, according to Budjeryn, author of “Inheriting the Bomb,” a forthcoming book from Johns Hopkins University Press.

In March 2014, Volodymyr Ohryzko, a former foreign minister, argued that Ukraine now had the moral and legal right to reestablish its nuclear status. In July, an ultranationalist parliamentary bloc introduced a bill for arsenal reacquisition. Later that year, a poll showed that public approval stood at nearly 50% for nuclear rearmament.

Last year, Ukraine’s ambassador to Germany, Andriy Melnyk, said Kyiv might look to nuclear arms if it cannot become a member of NATO. “How else can we guarantee our defense?” Melnyk asked. The Foreign Ministry denied that such options were under consideration.

Western experts, including Budjeryn, see the Ukrainian stirrings and threats as empty gestures given the tangle of scientific, logistical, financial and geopolitical challenges that Kyiv would face if it opted for nuclear rearmament. Kyiv could encounter the same dilemmas that have confronted Tehran, Iran, which has worked steadily for decades to acquire the know-how and materials to build a bomb — all of which Ukraine apparently lacks.

More widely, experts fear that the current crisis could turn Ukraine from an example of arms-control benefits to one of atomic-disarmament risks, and drive the Irans and Saudi Arabias of the world to pursue their own nuclear arms programs.

“If a diplomatic solution is not achieved, it will reinforce the impression that nuclear-armed states can bully non-nuclear states” and thus “reduce the incentives” for disarmament, said Daryl Kimball, executive director of the Arms Control Association in Washington.

Pifer argued in a 2019 analysis that the high costs of rearmament would ultimately include Ukraine finding itself alone in any crisis or confrontation with Russia.

“A lot of countries are supportive of Ukraine,” he said of the current standoff. If, however, the nation went nuclear, Pifer added, “that support would dry up quickly.”