Trees have been socially distancing to avoid deadly diseases for ages A picture taken on May 8, 2020 shows a row of trees reflected in the waters of a submerged rice plantation near Robbio, Lombardy, during the country's lockdown aimed at curbing the spread of the COVID-19 infection, caused by the novel coronavirus Photograph:( AFP )

Turns out, trees are no different from humans!

Humans may not be the only ones forced to socially distance from each other to avoid deadly diseases.

In the wake of COVID-19, besides changing our lifestyle and reconfiguring it to accommodate sanitisation, people were advised to avoid coming in contact with strangers, for they may be carriers of the deadly virus.  Even though it has a low fatality rate, new research suggests how the virus has long-term effects.

What is crown shyness?

Turns out, trees are no different from humans. In a bid to protect their personal space and themselves from life-threatening insects and diseases brought by them, trees may start distancing from each other.

As National Geographic noticed, some do it by mutually pruning their branches at each other, which leads to a breakage of branches that may be facilitating movement of organisms that carry diseases.

Such activity is referred to as “crown shyness”, and is common across forests around the globe. Scientists have noted gaps in between two trees, from where sunlight seeps in. There is no consensus on why this happens, but the trees are definitely distancing from each other. 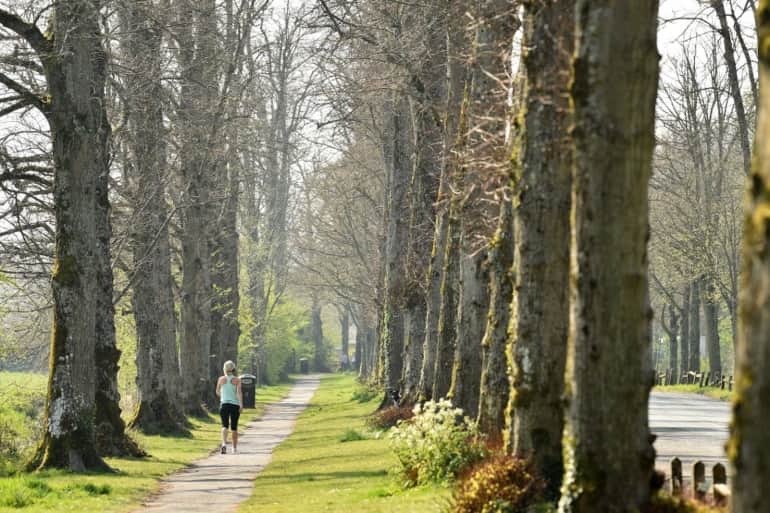 A woman takes her exercise between an avenue of trees in Arundel, in southern England on April 10, 2020 as warm weather tests the nationwide lockdown and the long Easter weekend begins | AFP

What does it achieve?

This may be to protect oneself and one’s health, and to improve productivity, a notion which has found traction even among humans in the aftermath of the lockdown.

Earlier, many scientists believed that spaces in between existed because the trees were unable to fill space due to lack of light. However, a 1984 research by Putz suggests that trees battle it out among each other to ensure they grow, while striking their neighbours to avoid overlapping.

Besides attacking each other during windy weather, crown shyness may also be a part of conditioning. Many trees have stopped growing tips entirely, coming to terms with the realisation that new foliage will die out anyway. This way, the trees avoid damage.

Regardless of why and how it happens, the gaps in between two trees are very beneficial for all parties involved. Leaves are very important to a tree’s survival, and hence will remain protected in the absence of constant warring with neighbouring trees.

Additionally, less foliage higher up in the tree ensures sunlight penetrates to the innards of the trees, ensuring its balanced dispersal, on which the tree’s health is dependent.

When trees are closely aligned and interlocked with each other, predatory vines may prey on this vulnerability to set up networks. For instance - liana vines commonly achieve this and are common in tropical and temperate forests around the world. These vines also give way to an onset of insects and germs that bring diseases.

Human brain not designed to stay awake past midnight. Here's why