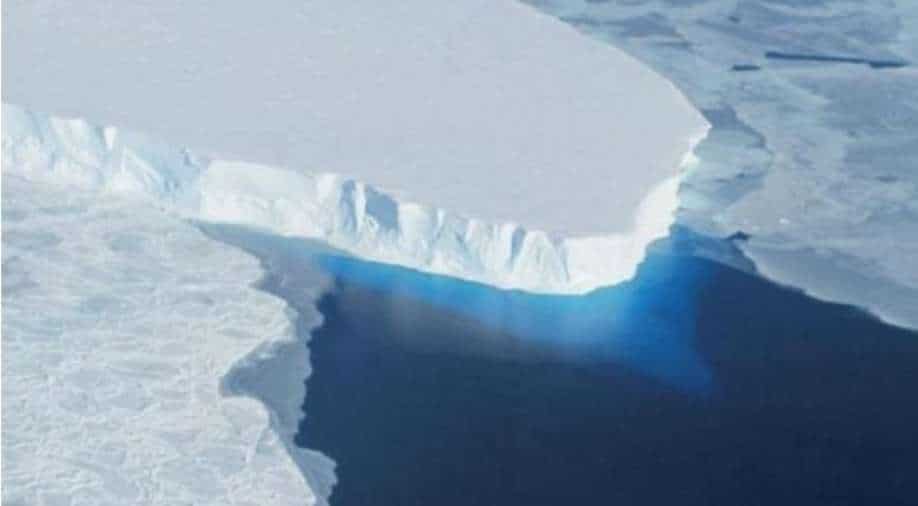 The Thwaites Glacier in Antarctica is seen in this undated NASA image. Photograph:( Reuters )

Global warming alert: The Thwaites Glacier, which flows into the Amundsen sea off western Antarctica, is around the size of Britain, or Florida, and its melting already contributes four per cent to annual global sea level rises.

The melting of a West Antarctic glacier threatens to cause the world's greatest rise in sea levels before 2100, scientists have said, warning that an ice shelf holding it back from the sea could collapse within three to five years.

The Thwaites glacier, which spans 120 kilometres and is nearly the size of Great Britain or the US state of Florida, would raise sea levels by 65 cm, or more than two feet, if it all fell into the ocean, the American Geophysical Union's fall meeting in New Orleans was told on December 13.

Its melting is currently responsible for around 4% of global sea level increase.

According to satellite pictures, the glacier stands on an ice shelf that is prone to failure due to newly discovered fractures on its surface and a massive fracture throughout the entire shelf.

The eastern ice shelf is being eroded by rising ocean temperatures, which are propelled in part by human-caused climate change.

According to the experts, if the shelf breaks away, the glacier's contribution to sea level rise might jump by as much as 25%.

The Earth's temperature has already risen by one degree Celsius.

However, data gathered by researchers beneath and around the shelf over the last two years indicates that the brace will not last much longer.

Watch | Study: The 'Most Dangerous' glacier is melting

Warm ocean waters are slowly but steadily eroding the ice from underneath.

The glacier's ice shelf is moving inland as it loses mass, and it will eventually disappear behind the submerged mountain that is pinning it in place.

Meanwhile, these waters have expanded fractures and crevasses in the ice, which are snaking through it like cracks in a car glass, shattering and weakening it.

According to NASA satellite data, global sea levels would rise two to six feet by 2100 if current trends continue, owing primarily to melting in Greenland and Antarctica.

However, scientists have warned that forecasts of sea level rise understate the impact of climate change.