The ocean’s youngest monsters are ready for glamour shots 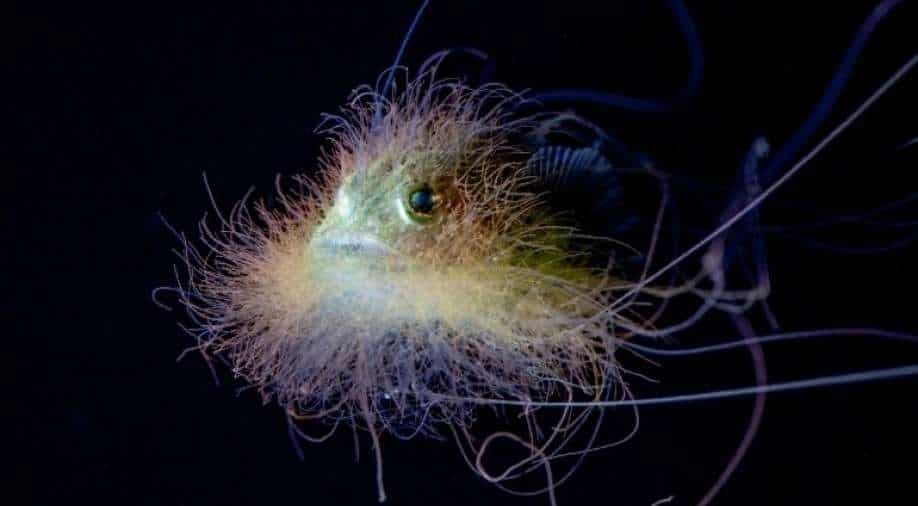 So far, the scientists leading the effort have recruited about a dozen divers, who have collected more than 60 specimens for analysis. More are in the pipeline

For most scuba divers, few places underwater match the visual thrill of a kaleidoscopic coral reef teeming with colorful fish. For Jeff Milisen, a marine biologist and photographer in Kona, Hawaii, there is no better place to dive than an open stretch of deep ocean. At night.

“There’s a whole lot of nothing,” he said. “There’s no bottom, no walls, just this space that goes to infinity. And one thing you realize is there are a lot of sea monsters there, but they’re tiny.”

Of course, there are big monsters, too, like sharks. But the creatures Milisen is referring to are part of a daily movement of larval fish and invertebrates, which rise from the depths to the surface each evening as part of one of the largest migrations of organisms on the planet. The emerging hobby of taking pictures of them is known as blackwater photography.

Most of the larvae are no bigger than a fingernail; others are even smaller. And they can easily be mistaken for bits of seaweed or drifting detritus. But up close, when captured with a camera using a special lens called a macro, the animals can appear to loom as large as wild animals on a safari — a safari on another planet.

Five years ago, Milisen began sharing his photos in a Facebook group, and there he discovered a community of passionate nighttime adventurers who were capturing images of living things rarely seen before. Perplexed and astonished by what they were photographing, Milisen and others in the community, called the Blackwater Photo Group, began contacting fish scientists, asking for help in identifying what they were seeing.

Even the most seasoned specialists responded with incredulity.

“The No. 1 thing people, even scientists, ask is: ‘What the hell is that?’” said Ned DeLoach, an experienced underwater photographer, who, with his wife, Anna, and writer Paul Humann, has published eight books on marine fishes. “Why these images are so spectacular and so popular is they’re so otherworldly. People have never imagined that creatures like this exist, and that has attracted photographers.”

David Johnson, curator of fishes at the Smithsonian National Museum of Natural History, was one of the first scientists to be contacted by members of the Facebook group. He said he was immediately smitten by the images.

“You have behavior, colors,” he said. “It really is a great advance in terms of what we can learn about the early life history of fishes.”

As the blackwater hobby has taken off, gaining adherents around the globe, more and more photographers have captured stunning images and videos that reveal a secret world of bizarre, tiny animals that scientists have struggled for decades to better understand. Many of the images have gone viral on social media, and some recently won major underwater photography awards.

Now, scientists like Johnson want to formalize the collaboration with blackwater photographers.

In a paper published Tuesday in the journal Ichthyology & Herpetology, scientists from Hawaii, along with Johnson and others at the Smithsonian, have outlined how they hope to enlist more nighttime underwater photographers, most of whom have no scientific background, to participate in marine research. If the photographers could collect specimens of the tiny animals they photograph, DNA could be extracted and analyzed.

So far, the scientists leading the effort have recruited about a dozen divers, who have collected more than 60 specimens for analysis. More are in the pipeline.

“We’re building a collection that for the first time has a live image,” Johnson said. “We get the specimen and create a DNA record tied to it.”

He expects scientists with a knack for underwater photography to join the effort as well. Marine researchers hope that examining images of animals photographed in their natural surroundings and pairing those images with data drawn from techniques such as dissection and DNA barcoding will significantly expand the knowledge of how these animals change over time and why they behave as they do. Ideally, the work will also shed light on the mysterious daily migration of creatures, called the diurnal vertical migration, that takes place every night in every ocean around the globe.

The diurnal vertical migration includes trillions of tiny animals, many in the larval stage, that rise from depths of 1,000 feet or more to just beneath the surface to feed. The journey takes place at night, scientists believe, because it allows the animals to avoid predation by larger fish that locate their prey visually. The baby fish return to the lightless deep before sunrise.

Like many insect species and frogs, most marine fishes and invertebrates look and behave vastly different in their larval stages than they do as adults. The fish larvae are often festooned with flamboyant, streaming appendages to help them navigate the currents or imitate other species such as poisonous jellyfish. Some have enormous eyes and broadcast a rainbow iridescence that would not look out of place beneath a glass counter at Tiffany’s.

Most marine fishes and some ocean invertebrates go through this two-stage life cycle. Scientists believe that the drastic shift in form is a product of evolution and natural selection.

“Larvae and adults are each living in a completely different evolutionary arena,” Johnson said. “The larvae make their living in the open ocean currents, which is such a different place than where they’re going to settle out, like the sandy bottom, a coral reef or the deep sea.”

The larval stage of many sea creatures transpires in the open ocean, which is difficult to study. Almost all of the previous understanding of what these animals look like comes from expeditions that collected them in large conical devices called plankton nets, which are dragged behind research vessels. The technique began over 150 years ago, gaining prominence with the Challenger expedition from 1872 to 1876, organized by the British government. There have since been some major advances in the technology, but the basic technique is largely unchanged.

Plankton nets draw the animals into a large open ring and funnel them into a jarlike device called a cod end. As water is forced into the jar, the animals are easily crushed and usually die before reaching the surface.

Many creatures, such as jellyfish, salps and glittery, orb-shaped animals called ctenophores, are so delicate that they are mushed into a gelatinous goo that researchers on boats pull from the jars by the handful. The animals that remain intact are fixed in an alcohol solution, which prevents them from decomposing but which turns them ghostly white. Often the delicate filaments and fins break off, making it impossible to know how the animals looked and behaved while alive.

“Those filament appendages are extremely important,” said Luiz Rocha, a marine biologist and curator of fishes at the California Academy of Sciences who is not involved in the project. He said that they can be used for mimicry, movement or camouflage.

“Because all that information is lost when collected in the nets, the photographs can open up an entirely new research area to understand why they have these features and what they use them for,” he said.

Open water observation of fish larvae is not new, but it was mostly practiced during the day. The technique, called blue water diving, began in the 1980s when a group of California scientists, hoping to overcome the problems with plankton nets, began taking boats out while the sun blazed overhead.

William Hamner, a retired ecologist and evolutionary biologist at the University of California, Los Angeles, was a pioneer of blue water diving and developed many techniques to drift and dive in the open ocean that are used today by blackwater divers.

“The fact that we started blue water is simply because no one cared enough about plankton at the time to go to all the effort to observe them in the wild, and I did,” Hamner said.

In both blue and blackwater diving, scuba divers usually travel far offshore, often 10 miles or more, where the seafloor may lie several thousand feet below. They descend 50 to 100 feet beneath the ocean while clinging to a tether that hangs from a boat or from a buoy on the surface.

In blackwater diving, however, powerful underwater lights are attached to a tether to illuminate the water, often attracting animals, including sharks. The avocation is not for everyone.

“There’s a whole new sensory experience when there’s no top or bottom,” said Anna DeLoach, one of the photographers. “It’s the closest I think I’ve come to being in outer space.”

For the photographers, capturing an image of something never observed, let alone photographed, before becomes almost an addiction.

“What’s really fascinating is when you send the scientists something and they have no idea what it is,” said Steven Kovacs, a dentist in Palm Beach, Florida, and a frequent contributor to the Facebook group, who has been blackwater diving for five years. “Or it’s the first time being seen. That’s one of the greatest thrills of all.”

The photographers have reason to gloat. Some scientists say the images, paired with DNA from collected larvae, have the potential to revolutionize the study of larval fishes.

“We believe this approach opens a new window for our understanding of these larvae and raises exciting questions for future research,” said Ai Nonaka, a researcher at the Smithsonian and the lead author on the paper.

Johnson hopes that the project will inspire a new generation of underwater photographers to become citizen scientists and participate in research.

“We’ve been doing this for four to five years, but it’s still new,” said Ned DeLoach, who began collecting specimens for the Smithsonian with his wife in 2019. “There’s so much that hasn’t been discovered yet. It’s a pretty handy thing to have a specimen in the Smithsonian collection with your name on it.”

Other scientists who study larval fishes are happy to give the photographers their due credit.

“I think that this is one of those special cases in which the underwater photography people actually realized something quite valuable and cool before science did,” said Tom Shlesinger, a marine biologist based in Florida who is a convert to blackwater photography. “It really opened my eyes and mind to the fact that we actually know very little about what’s going on in the sea at night.”