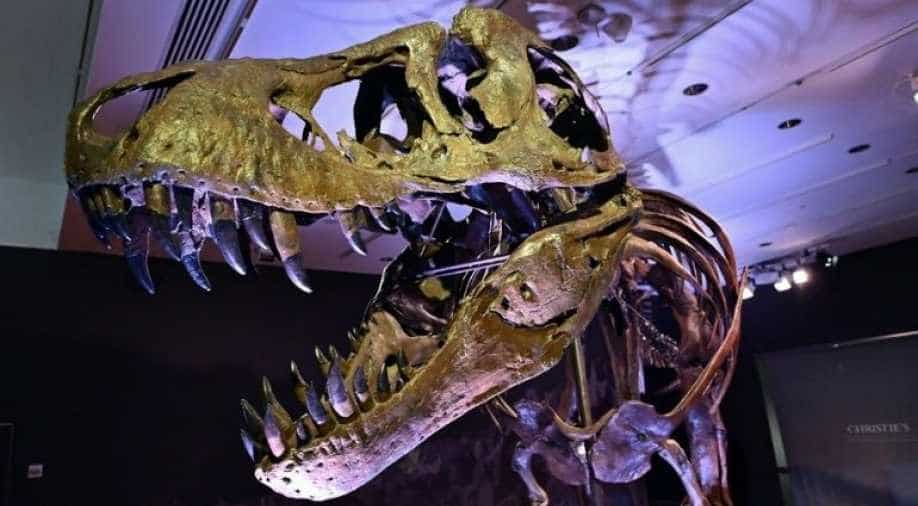 In this file photo of a Tyrannosaurus rex (T-Rex) skeleton, named STAN is on display during a press preview at Christie's Rockefeller Center Photograph:( AFP )

Fossils of more than 40 T. rex individuals have been found since it was first described in 1905, providing a wealth of information about a beast that thrives in the popular imagination

Researchers on Thursday unveiled the first calculation of the total T. rex population during the estimated 2.4 million years that this fearsome species inhabited western North America during the twilight of the age of dinosaurs.

They considered factors including the size of its geographic range, its body mass, growth pattern, age at sexual maturity, life expectancy, duration of a single generation and the total time that T. rex existed before extinction 66 million years ago. They also heeded a doctrine called Damuth's law linking population to body mass: the bigger the animal, the fewer the individuals.

Their analysis put the total number of T. rex individuals that ever existed at about 2.5 billion, including approximately 20,000 adults alive at any one time.

Fossils of more than 40 T. rex individuals have been found since it was first described in 1905, providing a wealth of information about a beast that thrives in the popular imagination.

"I think it probably is the iconic dinosaur, " said paleontologist Charles Marshall, who led the study published in the journal Science. "It is huge. It's got a huge head and huge teeth. It's really scary. I think we like feeling small. And boy, do you feel small when you're standing underneath a skeleton."

It was among the largest carnivorous dinosaurs, possessing a skull about 5 feet (1.5 meters) long, massive and muscular jaws with a bite force capable of crushing bone, a mouthful of banana-sized serrated teeth, a keen sense of smell, strong legs and puny arms with hands boasting just two fingers.

Perhaps the largest-known T. rex is a specimen named Sue at the Field Museum in Chicago, measuring 40-1/2-foot-long (12.3-metres), weighing an estimated 9 tons and living about 33 years.

The new study put the weight of the average adult T. rex at 5.2 tons, average lifespan at 28 years, generation time at 19 years, total number of generations of the species at about 125,000, and its geographic range at roughly 890,000 square miles (2.3 million square kilometres).

They calculated an average population density of about one T. rex for every roughly 40 square miles (100 square kilometres).

Marshall said he suspects there may have been "perhaps two in area of Washington, D.C., about one in the area of Manhattan, about one in the area of the city of San Francisco." He added, "But I suspect they were clumpy. They were following herds of prey around. So rather than just being like sentinels, one every 40 square miles, they probably moved in groups following prey."

While the uncertainties in the estimates were large and some of the assumptions may be challenged by other paleontologists, the study was a worthwhile effort to expand the understanding of this famous dinosaur, said Marshall, director of the University of California Museum of Paleontology and a University of California, Berkeley professor of integrative biology.

The formula could be applied to other extinct animals, Marshall added.

Paleontologist and study co-author Ashley Poust of the San Diego Natural History Museum said while 2.5 billion is a lot, it represents only about a third of Earth's current human population - and 20,000 is merely the size of a small town.