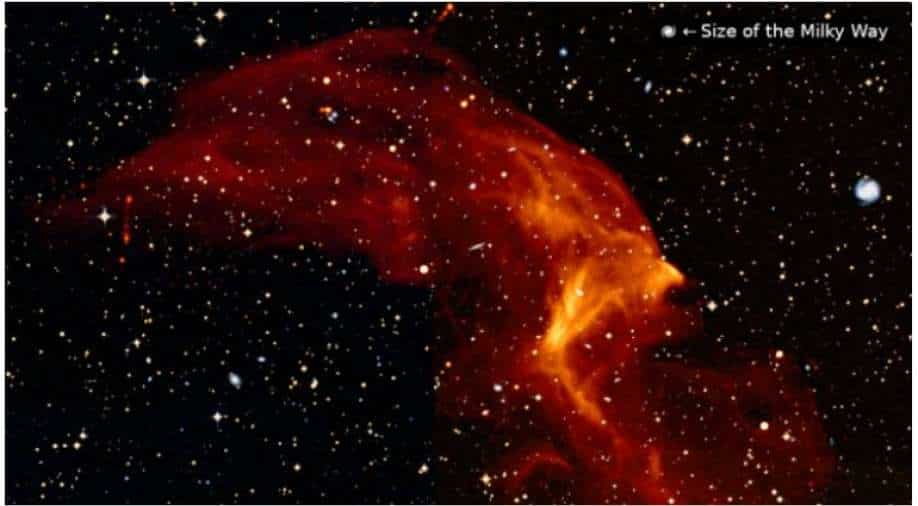 (Image: SARAO) Photo shows the shockwave and Milky Way Galaxy's size in comparison to it. Photograph:( Others )

Galaxies are huge. Really huge. Our Milky Way galaxy is so huge that it would take light (at 300,000 kilometres per second) would take 100,000 years to travel from one end of the galaxy to the other.

If you thought that was huge, wait till you imagine galaxy clusters. These are groups of galaxies and they often collide with each other. The shockwaves such collisions would generate would be quite massive. But exactly how massive?

Sample this, a shockwave of such a collision that took place billions of years ago is measuring 6.5 million light-years across! This means that this shockwave is many many times larger than entire Milky Way Galaxy!

The shockwave is travelling through space at speed of 1,500 kilometers per second (930 miles per second). The particular galaxy cluster that caused the shockwave is called Abell 3667. At least 550 galaxies are associated with it.

This shockwave is visible in radio wavelength. It has been observed by a team of astronomers using MeerKAT radio telescope in South Africa.

"These structures are full of surprises and much more complex than what we initially thought," says astronomer Francesco de Gasperin of the University of Hamburg. He was quoted by South African Radio Astronomy Observatory.