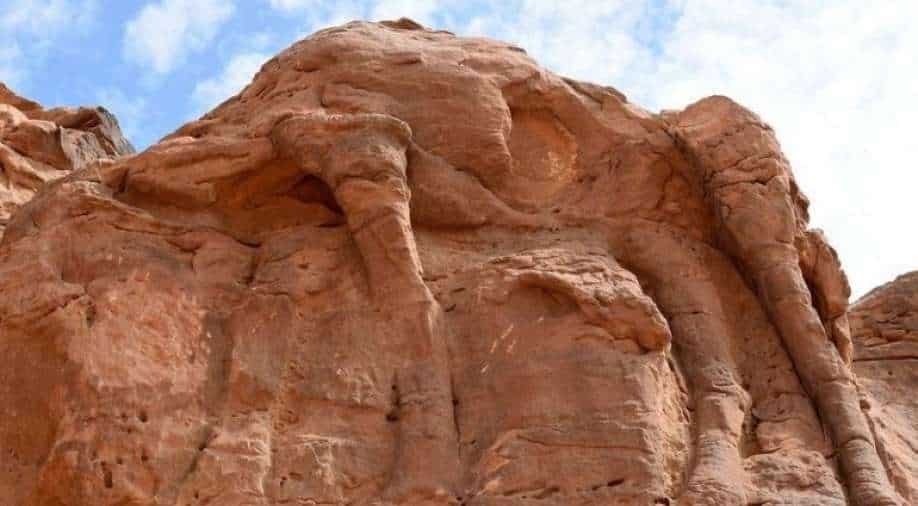 When the sculptures were discovered, researchers believed that they were 2,000 years old based on similarities with artworks found in Petra, Jordan, the rock site was initially dated from the Nabataean period.

The life-sized epic engravings of camels on the desert rocks of Al-Jouf, in the north of Saudi Arabia, which were first discovered in 2018 and originally thought to be 2,000 years old, actually date back 8,000 years, new research has revealed.

To provide striking details, the researchers used a variety of cutting-edge dating methods that established a much older age for the site, pushing its initial creation back to the Neolithic — the final division of the Stone Age. In 2018, carvings of camels and equids were found at the site and in total, 21 reliefs have been identified.

When the sculptures were discovered, researchers believed that they were 2,000 years old, based on similarities with artworks found in Petra, Jordan, the rock site was initially dated from the Nabataean period.

But as per the latest research published in the Journal of Archaeological Science, the actual age has been estimated. The research was led by researchers from the Saudi Ministry of Culture, the Max Planck Institute for the Science of Human History, the CNRS, and King Saud University.

It has been found that by the late 6th millennium BC most if not all of the reliefs had been carved, making the Camel Site reliefs the "oldest surviving large-scale reliefs" known in the world.

It is important to note here that 8,000 years old means the famous three-dimensional camel sculptures now becomes even older than some other ancient landmarks like Stonehenge (5,000 years old) or the Pyramids of Giza (4,500 years old).

The famous Camel Site is unique in its own way as the ancient mysteries around rock spurs are giving the researchers the fuel to keep digging and get to know more about it.

"We can now link the Camel Site to a period in prehistory when the pastoral populations of northern Arabia created rock art and built large stone structures called mustatil," the authors state.

"The Camel Site is therefore part of a wider pattern of activity where groups frequently came together to establish and mark symbolic places."

A scientific study by the #SaudiHeritageCommission with Saudi and international researchers, has been able to date rock carvings at the ‘Camel Site’ in Al Jouf back to the Neolithic period. pic.twitter.com/LxoH3ZSj1U

The #SaudiHeritageCommission team working at the ‘Camel Site’ in Al Jouf were able to identify and analyze rock carvings, even where they had been affected by natural erosion. pic.twitter.com/iAeDUNtJpN

As per the abstract of the research, the chronological assessment of the site became because of the severe damage by erosion, which was coupled with substantial destruction of the surrounding archaeological landscape.

The researchers revealed that to establish an age for the site the team used a range of scientific methods including analysis of tool marks, assessment of weathering and erosion patterns, portable X-ray fluorescence spectrometry (pXRF) to measure rock varnish density, and luminescence dating of fallen fragments.

In addition, test excavations identified a homogenous lithic assemblage as well as faunal remains, which could be radiocarbon dated.

Part of the study read, "Our results show that the reliefs were carved with stone tools and that the creation of the reliefs, as well as the main period of activity at the site, date to the Neolithic. Neolithic arrowheads and radiocarbon dates attest occupation between 5200 and 5600 BCE."

"Neolithic communities repeatedly returned to the Camel Site, meaning its symbolism and function was maintained over many generations," said the study’s author, Dr Maria Guagnin, from the Max Planck Institute for the Science of Human History in Germany.

"Preservation of this site is now key, as is future research in the region to identify if other such sites may have existed. Time is running out on the preservation of the Camel Site and on the potential identification of other relief sites as damage will increase and more reliefs will be lost to erosion with each passing year," she added.