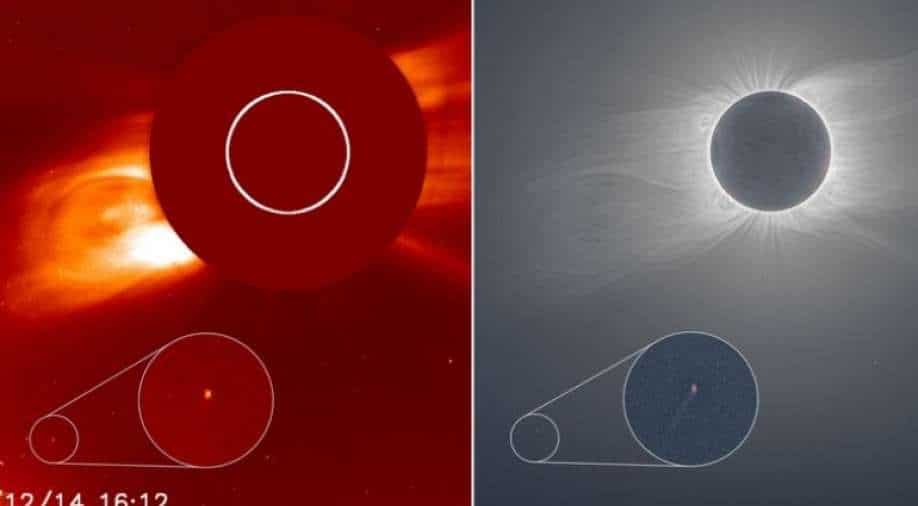 A newly discovered comet was photographed flying past the sun during the solar eclipse witnessed by Chile and Argentina.

The comet called C/2020 X3 was first spotted by Thai novice space expert Worachate Boonplod in satellite information on December 13, a day prior to the overshadowing, NASA said on Saturday.

He was participating in the NASA-supported Sungrazer Project — a resident science venture that welcomes anybody to look for new comets in pictures from the joint European Space Agency and NASA Solar and Heliospheric Observatory, or SOHO.

The comet, named C/2020 X3 (SOHO), is known as a Kreutz sungrazer, NASA said. This group of comets began from a huge parent comet that split up into more modest pieces well over 1,000 years back. The sungrazers keep on orbitting around the sun today.

Boonplod realized the overshadowing was coming and was anxious to see whether his new comet revelation may show up in the sun's external environment.

A satellite picture of the sun, shaded in red, shows a splendid bit of light circling the Sun. Around the time the overshadowing picture was taken, the comet was going at approximately 450,000 miles for every hour, about 2.7 million miles from the sun's surface, NASA said.

The comet was around 50 feet (15 meters) in breadth — about the length of a semi-truck, NASA said. It at that point broke down to tidy particles because of serious solar radiation, a couple of hours prior to arriving at its nearest highlight the sun.

Individuals in Chile and Argentina were blessed to receive the last absolute sunlight based shroud of 2020 last Monday. During an absolute sun powered shroud, the moon totally hinders the sun aside from the sun's external climate, called the crown, to make a lovely ring of light.

Kreutz sungrazer comets are most ordinarily found in SOHO pictures. The space observatory's camera works by copying complete solar radiation shrouds: A strong circle shut out the generally blinding light of the sun, uncovering dimmer highlights in its external environment and other divine articles like comets.

Until now, 4,108 comets have been found in SOHO pictures, with this comet being the 3,524th Kreutz sungrazer spotted, NASA said.

To the extent is known, no comets have ever really been believed to hit the sun-based surface, or the photosphere, the European Space Agency said.

The Kreutz sungrazers get to inside around 31,000 miles (50,000 kilometers) of the surface, simply going through the lower locales of the sun oriented air (the crown). Most generally vanish in the hot sun based environment.