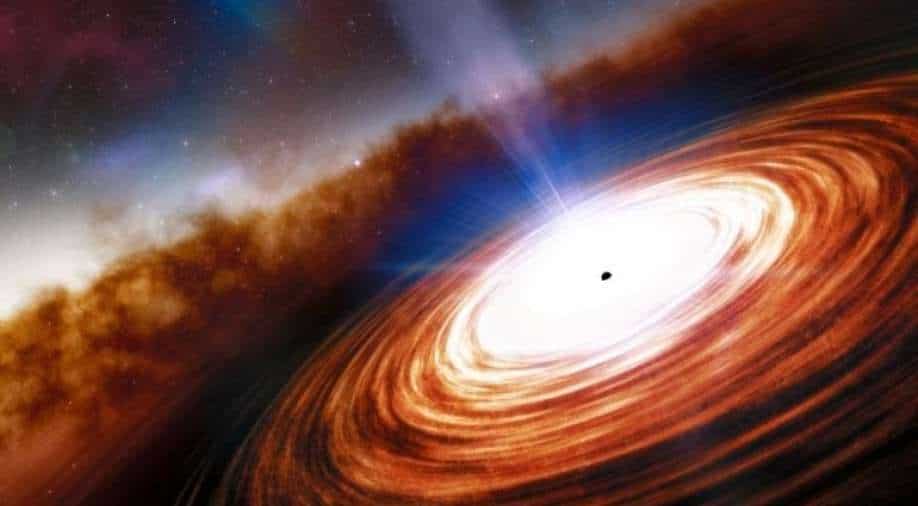 This artistic visualization shows J0313-1806, the most distant quasar ever found Photograph:( Twitter )

Scientists have discovered that the most distant quasar ever found is hiding a supermassive black hole, as per the latest study submitted to the American Astronomical Society.

The discovery made by researchers at the University of Arizona may help in solving the mystery of the formation of enormous black holes.

Also read: Caught in the act: Astronomers capture precise moment in which a black hole sucks a star

Anti-galactic nuclei quasars are among the brightest objects in the universe powered by supermassive black holes that are actively feeding on materials nearby.

The infant Universe following the Big Bang is relatively well known through extensive theoretical models and observation of cosmic microwave background -- the electromagnetic radiation of the nascent cosmos.

Co-author Xiaohui Fan said, "This tells you that no matter what you do, the seed of this black hole must have formed by a different mechanism. In this case, one that involves vast quantities of primordial, cold hydrogen gas directly collapsing into a seed black hole."

It has two asymmetric ''dips'' that correspond to the absorption at two different wavelengths.

Presenting both a crisis and a unique opportunity for astronomers, it's a mystery how a black hole can exist this early on. It is at least 20 million years old and it's twice as massive the most distant quasar.

The newly discovered quasar provides a new benchmark by ruling out two current models of how supermassive black holes form in such short timescales.

Scientists have discovered evidence that there is a wind of superheated gas flowing from around the galaxy's supermassive black hole, with this gas travelling at one-fifth the speed of light.

Lead author Feige Wang said, "This is the earliest evidence of how a supermassive black hole is affecting its host galaxy around it."

"From observations of less distant galaxies, we know that this has to happen, but we have never seen it happening so early in the universe," he added.