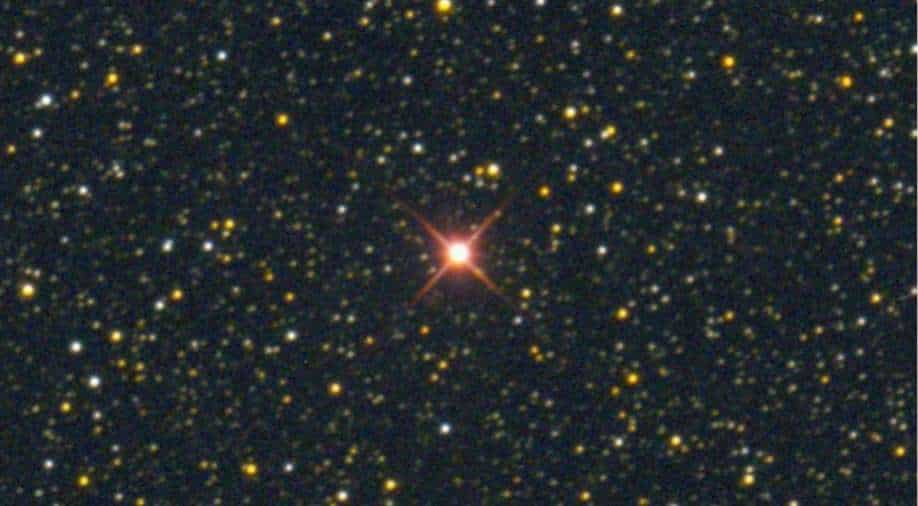 (Image: Michael Jaeger) The nova, seen in the middle of the image. Photograph:( Others )

A nova differes from a supernova. It is usually observed in binary star system

Supernova is an outright explosion of the star. The phenomenon is associated with death of a star. But a 'Nova' is a different type of explosion. It is a transient (short-lived) phenomenon in the universe that may look like birth of a new star. During or after a nova, depending on the intensity of the flash, a 'new' star may be visible for some days or weeks by naked eye.

But a particular nova is being called a 'record-fast' nova. This is because it flashed, and was visible for just a day and then faded from the view.

The galactic nova was in the northern constellation of Hercules the Hero along the constellation's border with Sagitta and Aquila.

A nova differes from a supernova. It is usually observed in binary star system, that is, two stars revolving around each other due to mutual effect of the gravity they exert on each other. One of them is a white dwarf star. The white dwarf siphons material from its companion star. The material gets accumuated near the white dwarf and is then heated. It results in an explosion. This is the nova.

"The white dwarf that exploded is massive and growing in mass toward a Supernova 1A explosion," astronomer Sumner Starrfield of the University of Minnesota told Universe Today. "It ejected far less mass than necessary to be accrete by the white dwarf and initiate an explosion."

"We are continuing to observe this system since it has not returned to quiescence," says Starrfield. "We know that it has a ~500-second oscillation—presumably the white dwarf rotation period—and an about 3.6 hour rotation period that is probably the rotation period of the binary. We need more spectroscopy and photometry to better understand those periods and the implications of those periods."