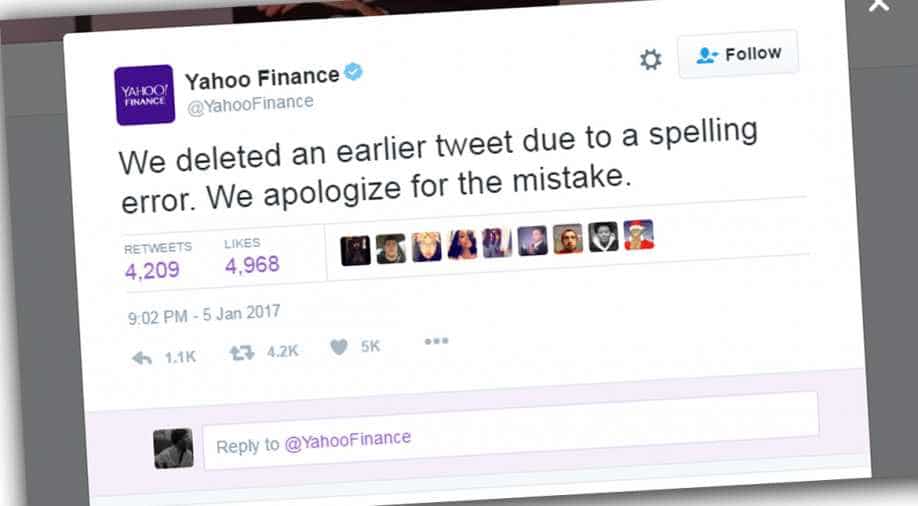 Yahoo Finance apologises for making an offensive typo in a tweet. Photograph:( WION )

Yahoo Finance on Thursday came under fire after it posted a tweet with a racist typo. The tweet read: "Trump wants a much *igger navy. Here’s how much it will cost."

While the tweet was about President-elect Donald Trump’s idea to expand the US navy, the change in one letter - from “b” to “n” - turned it into a cringeworthy sentence.

A screenshot of the offensive tweet made by Yahoo Finance. (Source: archive.is) (Others)

If Twitter users are to be believed, the tweet was up for over 20 minutes, which led to a plethora of retweets. Yahoo Finance, however, later deleted the tweet and apologised for the mistake. But before Yahoo removed it, a lot of users had already taken screenshots of the distasteful tweet.

We deleted an earlier tweet due to a spelling error. We apologize for the mistake.

While some believe that an autocorrect must have led to this typo, others are of the opinion that it was sheer carelessness in typing as “b” and “n” are placed next to each other on the keyboard.

In all fairness to @YahooFinance my phone autocorrects 'Chino Hills' to 'Chink' and you can bet I've never typed that word til now ??

But as happens with every Twitter controversy, Twitterati didn't let go of the opportunity and slammed Yahoo Finance with their wit and sarcasm.

I may have goofed with some typos before but at least I'm not the person that runs the Yahoo Finance twitter pic.twitter.com/njSAfudsLF

The 'B' on the keyboard of the Yahoo Finance headline writer: Just press me and hit send on this story.

The 'N' on the keyboard: pic.twitter.com/yYFnCJLtY1

If Yahoo Finance can't spell or proofread I am not trusting their financial advice. ??

Job opening at @YahooFinance. Requirement- cannot be dyslexic. Cant be afraid of re-reading and editing before blundering.. I mean posting..

Trump is currently calling up the Yahoo Finance intern and offering him a job as Social Media Director.

"Yahoo Finance" needs to cut a check to black twitter for saving their company and making jokes out of this situation.

Now do you FINALLY get why we need the #Edit function @twitter? Peep the 'Yahoo Finance' trend if you haven't already. #EpicTypoGoof??????????

If you're having a bad day, at least be thankful you're not the person running Yahoo Finance's social media right now.

If Yahoo Finance can't spell or proofread I am not trusting their financial advice. ??