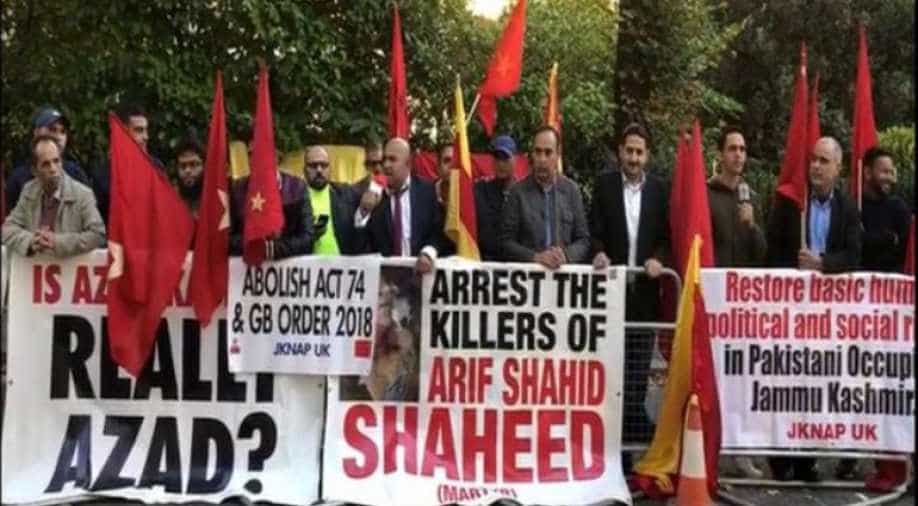 The protesters also accused Pakistan of sponsoring terrorists and jihadists in Jammu and Kashmir.

A large number of activists from Pakistan Occupied Kashmir (PoK) gathered outside the Pakistan High Commission in London to mark October 22 as 'Black Day'.

They shouted pro-freedom and anti-Pakistan Army slogans to demand the security forces leave PoK and Gilgit Baltistan who illegally occupied the region on this day in 1947.

Sajjad Raja, President of Jammu Kashmir National Awami Party, UK said, "We all have gathered here to protest against Pakistani invasion of Jammu and Kashmir on October 22, 1947. We are protesting against Pakistan because we think that is the day which caused the division of our state and that is the day when the ill-planning was conceived to suppress our people and victimize our people. That was the conspiracy which still ongoing, which still continuing".

Sajjad added, "We want to convey a message to the world that this sort of activity, this sort of brutality is not acceptable, come what may, we will never ever give up and continue our struggle against the Pakistani occupation in the state of Jammu and Kashmir and we believe this was a Pakistani act which resulted in Indian interference as well and consequently our country was divided between India and Pakistan. So, the whole root cause of this division is October 22 which was done in the name of Islam and in the name of brotherhood. We condemn this activity and will continue our struggle".

Rizwan Siddique, General Secretary of Jammu Kashmir National Awami Party, UK said, "We believe, if that adventure was not conducted by Pakistan on October 22 our state would have remained independent. The bloodshed in Kashmir is the result of that blunder by Pakistan".

The protesters raised apprehensions that Islamabad is planning to make Gilgit Baltistan its 5th province to make the path clear for China for its multi-billion dollar China Pakistan Economic Corridor (CPEC).

Sarfaraz Raza, a protester said, "We will continue to expose Pakistan's nefarious plans. We have apprehensions that Pakistan is planning to take a big decision on Gilgit Baltistan, but we will never allow it to happen because Kashmir is a disputed territory and Pakistan can't take any such decision with the consent of Kashmiris".

Many women from Pakistan occupied Kashmir also participated at the protest and exposed Pakistan for its ill-treatment to the residents.

Shazia GD, Chairperson, Jammu Kashmir National Awami Party (Women wing) said, "The Hindus and Sikhs were brutally killed. The tribal invaders sent by Pakistan first kill the Kashmiri Muslims and then Hindus and Sikhs. How long will you (Pakistan) continue to kill people in Kashmir and claim to be sympathizer of Kashmiris?".

"We don't have clean drinking water in Azad Kashmir (PoK), our children are not safe there. They are born outside of hospitals and die. However, your officials and politicians are going abroad for medical treatments. If you claim that Azad Kashmir is part of Pakistan, why don't we have all facilities and why we are all forced to live in exile"?, said Shazia while criticizing Pakistan for its dubious stand on Kashmir.

The protesters also accused Pakistan of sponsoring terrorists and jihadists in Jammu and Kashmir.