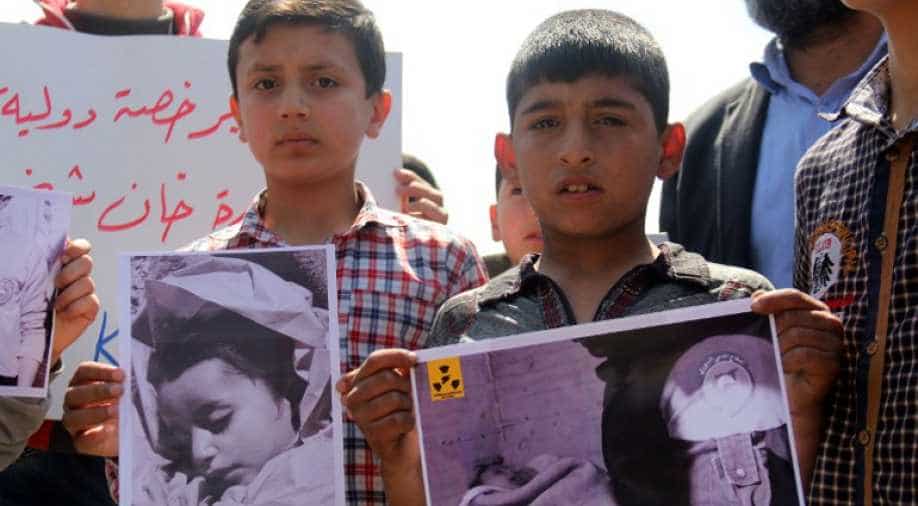 April 2017 file photo of Syrian residents of Khan Sheikhun holding placards and pictures during a protest condemning a suspected chemical weapons attack on their town that killed at least 86 people, among them 30 children. Photograph:( AFP )

The world simply cannot look away silently every time this horror is unleashed- because chemical warfare is a brutal war against humanity.

For nearly a century, the world has only been trying to eliminate chemical weapons. The Geneva Convention of 1925 prohibited the use of such weapons, but not the production or storage.

That changed in the last decade of the previous century. In 1992, a convention banned the storage and production too. This convention came into force five years later.

Since then, 193 countries have acceded to the convention and the organisation for the prohibition of chemical weapons, OPCW has been tasked with inspecting the presence of such weapons.

With regard to Syria, the OPCW even won the Nobel Peace Prize for its work in eliminating chemical weapons in 2013. Six years later, there is no accountability or punishment for countries flouting the convention.

How do they get away with it? On WION Edit, we explore this specific question. There are three categories of chemical weapons.

Among the states which possess category 1 weapons, the US is yet to destroy its chemical weapons. Russia says it has destroyed its weapons in 2017, but the Salisbury attacks took place in 2018. This says a lot about Russia.

Put simply, the two major military heavyweights continue to flout the rules. This makes other countries to follow suit too.

Syria has a dodgy record with chemical weapons. Since the involvement of Russia in the Syrian crisis in 2015, dozens of chemical attacks have been recorded by none other than OPCW.

And the effectiveness of chemical weapons encourages its continued use. This is a persistent danger, it's time to review the charter of OPCW.

The chemical weapons convention seems too weak to handle this threat. Ineffective penalties have only intensified the problem. Escalating the issue at UNGA or UNSC is not going to be the deterrent.

Over the last fifty to sixty years, the use of chemical weapons has been a recurring theme in every conflict. These weapons were reported to have been used in the Vietnam war, then it was in the news again after the Soviet Union's invasion of Afghanistan in 1979, Rhodesia, Angola, Iran-Iraq war, Iraq attacks on Kurds in 1988, Gulf War, and now Syria.

Unless the big fish, the US and Russia are compelled to abide by these conventions in letter and spirit, this situation is unlikely to change.

And, the Nobel Peace Prize to OPCW will mean next to nothing if the weapons are not abolished altogether. Stringent punishment is absolutely necessary and trade sanctions won't be enough.

The world simply cannot look away silently every time this horror is unleashed- because chemical warfare is a brutal war against humanity.