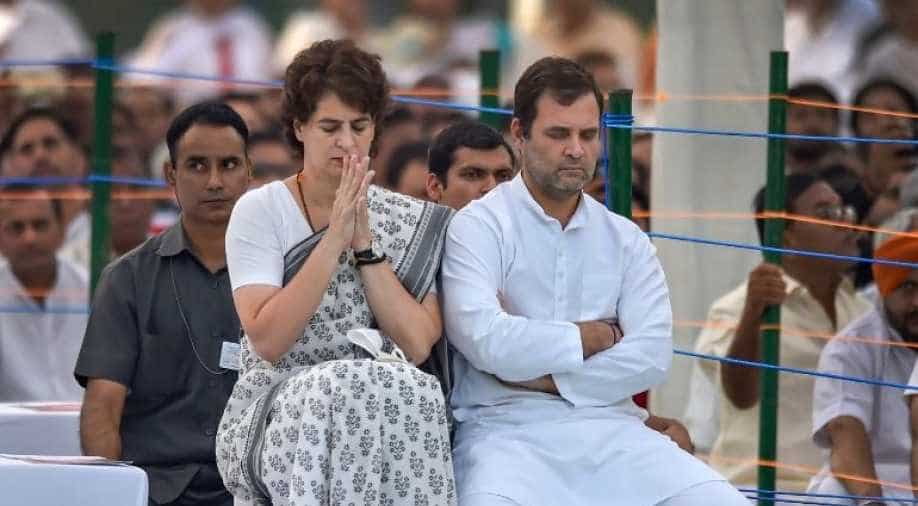 The Congress of today is like an old man, living in a bygone era,  throwing tantrums, angry, bitter at everything, but with no solutions to offer.

There is an existential crisis brewing in the Congress at the moment. It’s not just about the grand old party’s loss in the general election; the problem with the Congress runs deeper than victory and defeats, or even the policies of the party — the problem is the collapse of the party brand.

The grand old party, which had global ambassadors like Gandhi and Nehru, strong national icons like Patel and Indira Gandhi, modern faces like Rajiv Gandhi and world-renowned economic stalwarts like Manmohan Singh, is today reduced to an outdated Leftist, anti-national, Muslim-appeasing outfit

The Congress of today is like an old man, living in a bygone era,  throwing tantrums, angry, bitter at everything, but with no solutions to offer.

The same Congress that gave India her maximum number of Prime Ministers, does not have a name deserving of the seat. This is ironical because the party is lead by a young and fit Rahul Gandhi, who is very well-read, well-travelled, well-educated, and hails from an illustrious lineage.

So, exactly who are the leaders responsible for completely ruining brand Congress and brand Gandhi, reducing the party with a national footprint to a fringe player?

Mani Shankar Aiyar: He is uncouth, extremely arrogant, has a huge ego and is stubborn as a mule. His perverse “chaiwalla” barb created massive sympathy for Modi in 2014 and his “neech” remarks turned the fortunes of the BJP in the Gujarat elections.

What many don’t know is that Mani Shankar as a minister in UPA-2, got along with very few Congress leaders. In the 2009 elections, which the DMK and Congress swept in Tamil Nadu, Mani lost his seat! Yet, when he was made a Union Minister, Mani fought with everyone.

It was he, who first alleged wasteful expenditure in the CWG games, much before the BJP could seize upon the chance that led to an avalanche of corruption charges against the Congress, something the party has not been able to get rid off.

Jairam Ramesh: Another Left-leaning, so-called leader, with zero mass base. He is singularly responsible for getting down UPA government’s GDP numbers. He was an obstructionist in all infrastructure and development work conceived by the UPA and he created the perception of policy paralysis.

Disliked by an aspirational young India, his bookish knowledge just does not translate into practical solutions.

Madhusudan Mistry and Mohan Prakash: The two other Left Socialists in the Congress, both outsiders with no mass base, have been given a lot of importance from Rahul Gandhi’s office. These two featherlight gems have not just hurt brand Congress, but have damaged the foundation of the party whenever an assignment has been given to them.

Many believe the Left socialists in the party are a major cause of the Congress debacle in 2014 and this has hurt brand Gandhi, as they are considered to be closest to Rahul Gandhi.

If Left-leaning Socialism was one major cause for the defeat of the Congress, the electronic media was the other reason for the brand being sullied. People in charge of the media department continue to be protected and promoted by the office of Rahul Gandhi.

Ajay Maken: He loves bhatura, a deep fried puri, that is tempting from the outside, but hollow inside and very unhealthy. Maken was made the party’s media in-charge during UPA -2 and since then, the Congress’ relationship with the media, particularly the electronic media, has been on a downhill.

Instead of focussing on how to improve the party’s battered image, an incompetent Maken was busy settling petty personal scores from his student days with Manish Tewari, the then I&B minister. He was neck-deep in checkmating the I&B ministry run by his own government and this short-sightedness resulted in the electronic media turning totally anti- Congress.

It is no rocket science that the reason why the Congress was reduced to its lowest-ever total of 44 seats in 2014, is the hammering the Congress and the Gandhis got at the hands of the electronic media. Ajay Maken as in-charge was a complete failure.

Despite this, he was promoted as Delhi Congress president, where he had petty problems with three-time chief minister Sheila Dikshit.

The Congress was reduced to zero in the Delhi Assembly elections under his leadership and when Maken was caught on camera stuffing himself with his favourite bhatura before going on a “hunger fast”, he reduced Nehru’s party to a joke.

Surjewala never spoils his personal equation with several news channels that the Congress boycotts and instead of being the bad guy, he maintains excellent relations with owners and editors of these channels.

Surjewala will do nothing about how brand Congress suffers or the Gandhis are made targets because all he cares about is his own face on the television. Therefore, there is an anti-Gandhi sentiment in newsrooms.

The only thing that happens efficiently from the Congress communications department, which Surjewala heads, is stories are planted against rivals in the Congress party itself! This is not to say that Congress cannot come back to power, but for that to happen, these generals need to be given the golden handshake.

Author is a political analyst. He is also a TV show host and a successful entrepreneur