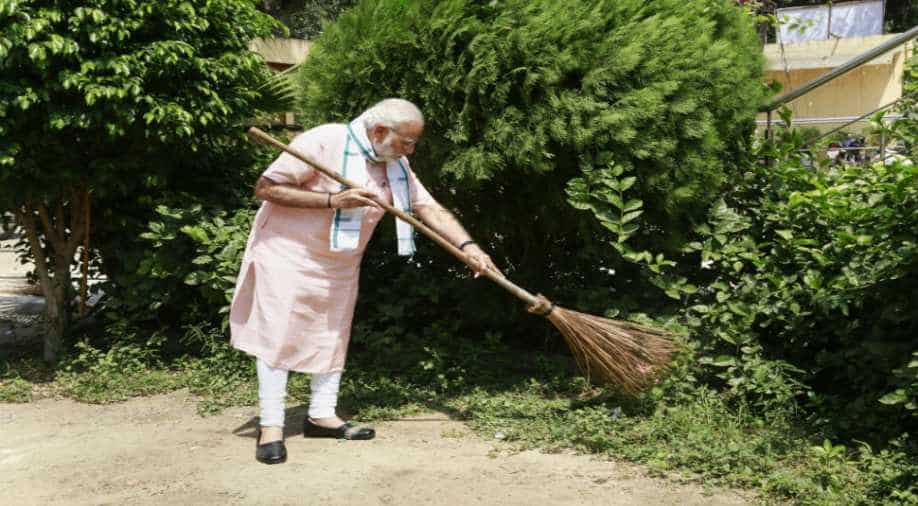 In India, one of the most unedifying sights of an early morning rail ride is mass scale defecation along the tracks, in the villages as the train chugs along and in the open fields, where crops provide a cover for concluding one of nature’s most elementary acts.

Of all the flagship programmes launched by Prime Minister Narendra Modi during his first term, one that seems to have carried the day is the Swachh Bharat mission. Its impact on the hundreds of millions of Indians, especially women, deprived of basic sanitation facilities, can scarcely be underestimated.

An important part of the Modi persona has been the BJP-led NDA government’s flagship programmes like the Jan Dhan Yojna, Pradhan Mantri Awas Yojana, Atal Pension Yojana and Ayushman Bharat, among others. But in terms of impact on the common voter, the Swachh Bharat mission should be considered the high water mark.

The Swachh Bharat or cleanliness programme, a nationwide campaign that aims to clean up the streets, roads and infrastructure of India’s cities, towns, and rural areas, can be safely assumed to have impacted BJP’s electoral prospects, ahead of any other public welfare programme launched by the Modi government. Sure, one factor is never enough to tilt the balance in a party’s favour, yet certain facts are worthy of consideration.

On October 2, 2014, Modi launched the nation-wide cleanliness campaign on the occasion of Mahatma Gandhi’s birth anniversary. The concept of Swachh Bharat is to provide sanitation facilities to every family, including toilets, solid and liquid waste disposal systems, village cleanliness and safe and adequate drinking water supply. Modi’s pledges to keep the environment clean were met with sniggers from a class of people, who had never faced sanitation issues in their lives. But they, as luck would have it, were not the archetypal Indian voter.

To the professional historian, the prospects of Modi, a former RSS pracharak, invoking Gandhi would be anathema, but the prime minister went ahead nonetheless. In Mohandas Karamchand Gandhi’s memorable words, “Sanitation is more important than independence”. He made cleanliness and sanitation an integral part of his agitational politics.

In his newspaper Navajivan (November 2, 1919), Gandhi famously wrote: “In some countries spitting on the road is a criminal offence. Those who spit after chewing betel leaves and tobacco have no consideration for the feelings of others. Spittle, mucus from the nose, etc, should also be covered with earth.”

At the official launch of the Swachh Bharat campaign, Modi — who has a way with words — called it ‘Satyagraha se Swachhagrah’ in reference to Gandhi’s Champaran agitation in favour of indigo farmers.  The mission had two thrusts: Swachh Bharat Abhiyan (rural), which operates under the ministry of drinking water and sanitation and Swachh Bharat Abhiyan (urban), which works under the aegis of the ministry of housing and urban affairs. According to the latest data, the government has constructed 86 million toilets since 2014 under the mission, reducing the number of open defecations from 550 million to fewer than 150 million in 2018.

In 2017, the government cited a UNICEF Survey carried out in 10,000 households across the country to claim that the Swachh Bharat Mission was meeting its targets, three years after its launch. The survey, conducted across 12 states, stated that 85 per cent members of the households studied were using toilets.

While government data should rightly be regarded with scepticism, in political terms, an idea had been thrown open in the public domain, coming from the highest office in the country. Somewhere the worm had turned, despite the Congress branding it as a mediocre idea, when it was first announced.

Now, from the benefit of hindsight, one can say that the Prime Minister knew all along what he was doing. As early as March last year, obviously with an eye on the on 2019 Lok Sabha elections, Modi urged chief ministers of BJP-ruled states to expedite implementation of welfare schemes and to take his government’s flagship programmes to the masses.

At this crucial meeting, work done by different states were discussed and deliberations were held on coordination between the Centre and the states for effective implementation of the government’s flagship schemes, in particular, the health insurance scheme. Even though the health scheme, promoted as NaMo Care, has not made as many waves as the party expected, it’s implementation in Modi’s second term, could be a potential winner.

The importance of social welfare programmes seem to have been driven home, even if it was not so evident during the course of political discourse in a virulent campaign. Chief ministers present at this meeting were asked to submit a report on the implementation of the welfare schemes. The support that Modi has got from the country’s 48 per cent women voters makes a good study for researchers. His ambitious social welfare scheme —Pradhan Mantri Ujjwala Yojana —with the aim of providing 5 crore LPG connections to women below the poverty line across the country, took a heavy toll on the opposition campaign. It seemed a strategic decision to reach out to women in a scheme aimed at replacing unclean cooking fuels, used mostly in rural India with the clean and more efficient LPG gas.

Election results, particularly in UP where the Prime Minister was able to develop a connection with women at large, seem to reflect in the UP Lok Sabha results.