Kurdish women have been exceptions in mostly conservative Middle East 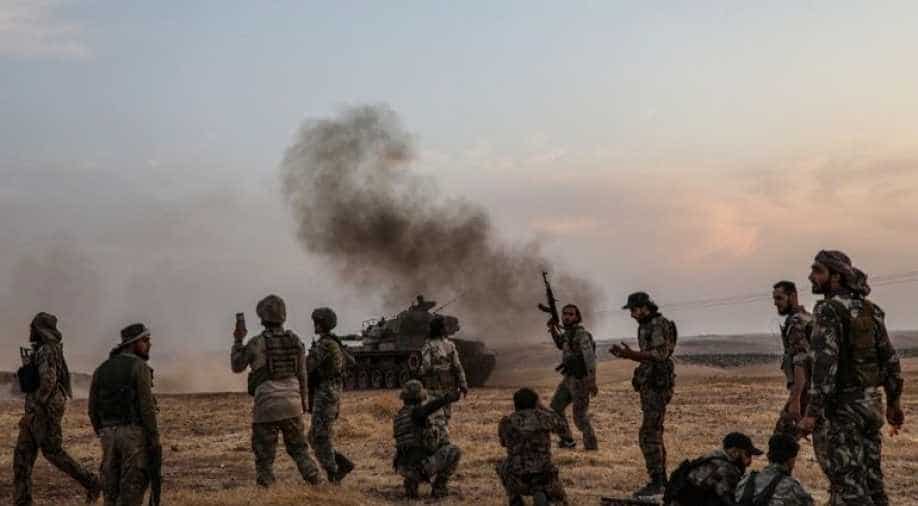 The women of Kurdistan are fighting for their life and liberty. And the cost is hard, dangerous labour

Kurdish fighters under attack by Turkey have described President Donald Trump’s decision to withdraw US troops from northern Syria as a “stab in the back.”

Since the bombing began on October 9, Turkish military operations against the Syrian Democratic Forces in northern Syria, Washington’s staunchest and most effective allies in the war against the Islamic State, has killed at least 11 civilians and an unconfirmed number of Kurdish fighters, with estimates ranging from dozens to hundreds.

Kurdish fighters are key partners to the US in the Middle East. From 2003 to 2017, they helped overthrow the regime of Saddam Hussein, battled al-Qaida and pushed the Islamic State out of northern Iraq and Syria.

Kurdish women have fought on the front lines in all these battles, as they have done since the 19th-century Kurdish commander Kara Fatma led an Ottoman battalion of 700 men and 43 women against the Russian Empire.

That was unusual for the period – but, then again, Kurdish women have long been exceptions in the mostly conservative Middle East.

Who are the Kurds?

Kurdistan, where I was born, is among the largest nations in the world without a state. Around 35 million Kurds inhabit a mountainous zone straddling Turkey, Iran, Iraq, Syria and Armenia.

The Kurds were first split up politically in the 17th century when their territory was divided between the Ottoman and Safavid empires. Back then, the Roman scholar Pietro Della Valle travelled to the region and was surprised to find “Kurdish women commuting freely without hijab.” He noted in his 1667 travelogue that “they engage with Kurdish men and foreigners without any problems.”

After World War I, a treaty between Britain and France, called the Sykes-Picot Agreement, drew arbitrary borders across the Middle East, creating colonial protectorate states. The partition again fragmented the Kurds, this time across four countries: modern-day Turkey, Iran, Iraq and Syria.

The Kurds have been fighting for their sovereignty ever since. In recent decades, they have succeeded in establishing autonomously governed regions within Iraq and Syria.

But in Iran and Turkey, the Kurds continue their armed struggle. Both countries to view this ethnic minority as a terrorist threat and legally repress Kurdish populations.

This setup has put Kurdistan – domestically a rather peaceable, prosperous place with significant oil reserves – squarely in the center of a geopolitical quagmire.

Until Trump’s recent turnaround, the US had backed the Kurds in Syria, Iraq and Iran, where they were critical to defeating the Islamic State and served as jailers to about 11,000 captured IS fighters.

But Turkey – a US ally – sees the armed Kurds in Syria as an extension of the rebel Kurdistan Workers’ Party, or PKK, which has been fighting for Kurdish autonomy in Turkey since the 1980s.

In May 2018, over 250 people were killed when Turkey bombed the Kurdish-majority Syrian city of Afrin, which Turkish armed forces consider a “terrorist corridor.”

The feminists of the PKK

The Marxist-Leninist PKK, founded in 1978, may be an enemy of the Turkish state, but it is also one of the most feminist movements in the Middle East.

The group held its first congress on women’s rights in 1987, in which PKK co-founder Sakine Cansiz – who was assassinated in 2013 – proposed that its “liberation for all” rhetoric must include women’s liberation, too.

In the autonomous Kurdish regions of Iraq and Syria, women have the same legal rights as men. Indeed, the Iraqi Kurdish regional government has a higher proportion of women than the United Kingdom – 30 per cent versus 20 per cent.

The charter of the semi-autonomous Syrian Federation of Kurdistan, founded in 2012, requires that women must hold a minimum of 40 per cent of all government posts. Every Kurdish Syrian public institution must also have two co-presidents, one male and one female.

Women also make up 30 per cent of Kurdish fighters deployed across the Middle East. More than 25,000 Kurdish women are deployed in Syria as the Women’s Protection Units, an all-female militia inspired by the KPP’s feminist liberation ideology.

In contrast, about 14 per cent of US military service members are women.

Equal in battle but not everywhere else

Despite the relative freedom of women in Kurdistan compared to elsewhere in the Middle East, Kurdish society is not entirely gender equal.

In 2014, only 12 of 250 judges in Iraqi Kurdistan were female, and just one of 21 government ministers was. Female genital mutilation, child marriage and honour killings – in which male family members murder women who are alleged to have disgraced their families – persist, particularly in rural areas of Kurdistan.

And, in my experience, feminist debates like equal pay for women and #MeToo aren’t yet a topic of conversation in Kurdistan.

Historically, too, it’s noteworthy that many famous female Kurdish leaders succeeded only because their empowerment did not challenge the male establishment.

During World War I, Lady Adela Khanum, leader of the Kurdish region of Halabja, saved the lives of numerous British army officers on the battlefield, earning her the nickname “Princess of the Brave.”

But she originally rose to power because she inherited the position when her husband died. While ruling Halabja from 1909 to 1924, she did not push a women’s rights agenda.

The hard labour of freedom

Kurdish women who were seen as threats to male authority have often been punished, sometimes with death.

That’s what happened to the very first woman to fight in the Kurdish army. Margaret George Malik quickly rose up among the all-male ranks in the 1960s to lead troops in the Kurdish war for independence from Iraq.

She was murdered in 1969 under mysterious circumstances. Some historians believe that Malik was killed by her lover because she rejected his marriage proposal. Others say she was assassinated by the Kurdish leadership, which feared her growing influence.

It’s meaningful that in the Kurdish language, the word for woman – “jin” – shares a root with the word for life: “jiyan.” And both jin and jiyan are related to the word “jan,” or labour pains.

In a region surrounded by threats – from Turkey’s attacks and Islamic State terrorism and patriarchy at home – the women of Kurdistan are fighting for their life and liberty. And the cost is hard, dangerous labour.