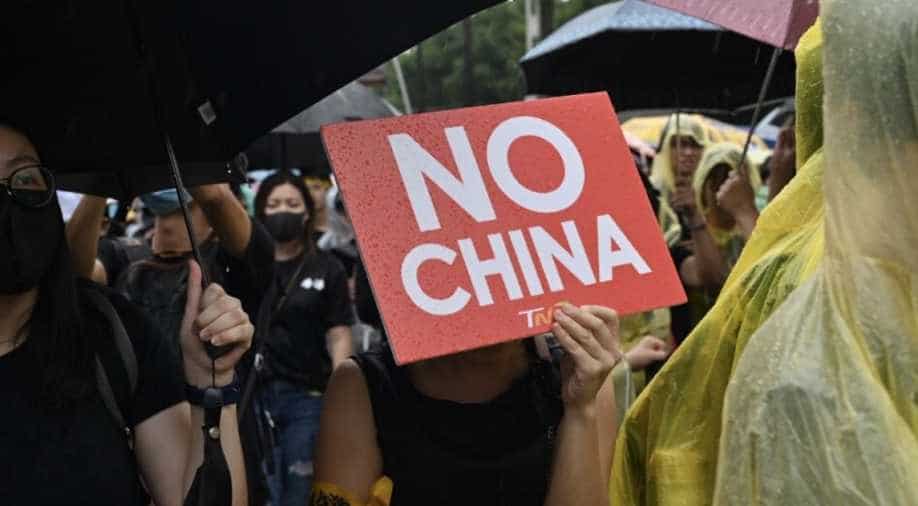 Taipei refuses to recognise Taiwan as part of 'One China'. Photograph:(AFP)
Follow Us

According to a  survey carried out from April 21 to May 28 in Taiwan, 75.3 per cent people consider themselves "Taiwanese," 20 per cent selected both Taiwan and China and only 4.7 per cent think of themselves as Chinese. The survey clearly indicates the rejuvenation of nationalism in Taiwan post thumping victory of President Tsai in January 20 elections. The Chinese government, since Tsai's re-election as the President, has left no stone unturned to coerce Taiwan to prevent Tsai crossing the red line of declaring independence.

Furthermore, in a statement, People's Republic of China (PRC) omitted the world ‘Peaceful’ while talking about reunification of Taiwan and this gave rise to the media buzz that Beijing seems to be looking at the unification of Taiwan by force. The speculation was also backed by PLA’s military posturing in Taiwan Strait along with some exercises of amphibious operations.

President Tsai Ing-wen in her inaugural address, after being sworn-in on May 20, vowed to continue efforts to push for peace and stability in the Taiwan Strait, adding that the nation would not accept Beijing’s “one country, two systems” framework. This has certainly set the alarm bells ringing in Beijing. Taiwan also outperformed most of the other societies worldwide in containing the coronavirus. Taiwan has earned global goodwill despite Beijing's coercion, as China continues to earn global anger by continued aggression and over adventurism.

Taiwan’s free grants of medical equipment worldwide dented Beijing’s PR campaign of profiteering out of pandemic through its ‘Health Silk Road’. This track record not only spurred renewed calls for Taiwan to be allowed to join last month’s World Health Assembly, but made a mark for future discussions, as a global consensus seems to be emerging for Taiwan’s access to the WHO and other multilateral agencies.

Also Read: Why does India need to back Taiwan’s reentry to the World Health Assembly?

Taiwan has own reasons to demand a national status. Ever since Communist Party of China (CPC) took control over the Peoples Republic of China (PRC) and Republic of China (ROC) government fled to Taiwan in 1949, Taiwanese historians maintain that they represent entire China and lost the mainland to PRC in a civil war, which has not yet been officially declared to be over.

The Convention on Rights and Duties of States signed in Montevideo on 26 December, 1933, is the key document on statehood. According to Article 1 of this Convention a state has “a) A permanent population; b) A defined territory; c) Government; and d) Capacity to enter into relations with the other states.” Taiwan clearly meets these requirements for statehood.

It’s a democratic society, having elected government, own constitution, own defence forces, own currency and strong economy. Taiwan is a member of WTO, Pacific Economic Cooperation Council, Asia Pacific Economic Cooperation Forum as Chinese Taipei, and has been participating in Olympics by the same name so far. Being an economic and technological giant, Taiwan aspires for greater position and role in the international environment. In Taiwan, the DPP government did not seem to be intimidated despite Chinese aircraft carrier moving in Taiwan Strait. In fact, Taiwan daringly rejected China's coercion and stood in support of Hong Kong protestors. It promises continued support to political activists fighting for democracy of self-ruled Hong Kong by considering granting of asylum to them.

Beijing’s anger prompted some CPC supporters to think of using the pandemic situation for reunification outside the peaceful domain. In my opinion, attempting to take Taiwan by force does not make any strategic sense internationally as well as domestically. It has all the negatives and no positive except false bravado, with bright chances of loss of face globally and domestically. Chinese strategist Qiao Liang, a retired PLA Air Force Major General, has warned that the coronavirus pandemic should not be seen as a chance for Beijing to take back Taiwan by force.  Chinese redline of “Taiwan going nuclear/declaring independence” has not been crossed as yet, giving no justification to adopt such an option.

Also Read: By excluding Taiwan, WHO remains a flawed organisation

Taiwan with its national spirit, determined armed forces and US backing is unlikely to give a walkover. Chinese amphibious capabilities to capture Taiwan are doubtful, more so if US warships are around. China has enough missile arsenals to destroy Taiwan, but such massive destruction of Han Chinese (95 per cent of Taiwanese population is Han), who have relations, investments and inseparable linkages with their relatives in mainland and vice versa will not go well with a domestic population of the mainland.

China is Taiwan's largest trading partner, which has replaced the US as No 1 destination for Taiwanese export accounting for approximately 40 per cent of total exports, with Taiwan having a trade surplus of approximately $2.27 billion with China. A cross-strait war is, therefore, not in Chinese economic interest.

Getting Taiwanese under its wings will also bring a fresh democratic wave in China, with Hong Kong already on the boil. Taiwanese people do not want to sacrifice their democratic freedom and prosperity, which is the main reason for the success of Tsai.

PRC may keep claiming Taiwan to be its domestic issue, but it has much greater external dimensions. Diplomatically the US may claim to follow ‘One China Policy’ but it treats Taiwan no less than an ally. The Taiwan Relation Act,1973, Taiwan Travel Act signed last year, Sale of State of the Art Weaponry and joint exercises justify the statement. US will always like to trade and strategically partner with democratic Taiwan outside Beijing’s influence, and not Taiwan under CCP.

Use of force by the PLA towards Taiwan may not prompt Washington to declare war immediately, but it could join forces with its allies in the region to use their sea and air advantages to cut off Beijing’s maritime lifeline in and outside the South China Sea. Taking Taiwan by force, therefore involves mobilisation of all its combat resources, expecting an escalation from limited war to an all-out war, as the operation amounts to crossing US redline of “No Change in Status Quo of Taiwan”. China has to cater to the repercussions of its strategic miscalculations. Economically Chinese heavy reliance on the US dollar is far from over, and such a war over Taiwan would be a massive economic blow for China, that would see capital flooding out, and companies moving of the country, much sooner than it thought.