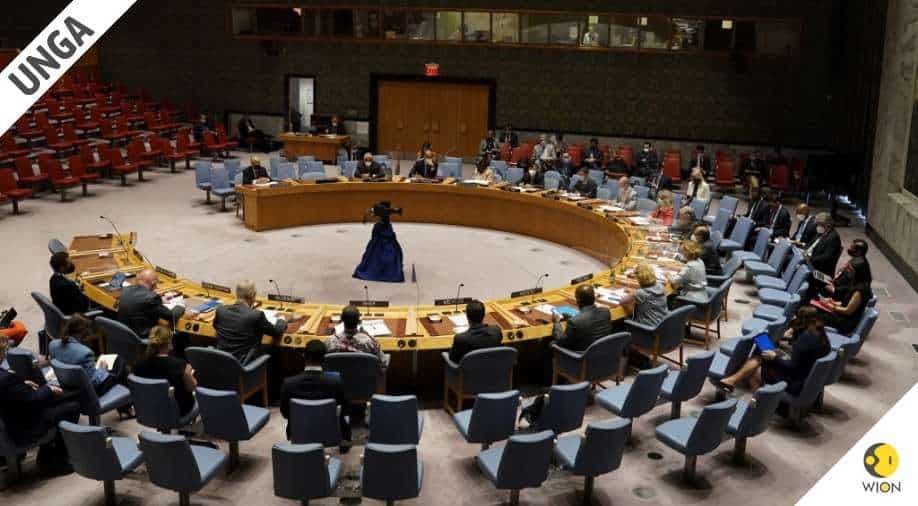 India has worked closely with all UNSC members to achieve a consensus on various issues Photograph:( WION )

The three main issues in front of the UNSC were – maritime security, peacekeeping and counter-terrorism. All the three are very important for India

After a decade India become a non-permanent member of the United Nations Security Council for 2021-22 by securing a record 184 votes from a maximum of 193 countries. This is the eighth time India has been part of the highest decision-making body at the UN. While its the 75th year of the UN, this year also coincides with India's 75th year of independence.

With the summer holidays in many countries, August is normally a quiet month with empty tables at the UN, added to this was the ongoing impact of the COVID-19 pandemic which despite all protocols has had a major impact on normal activities.  As it turned out it was not the case in the Security Council this August. Fourteen "Outcome Documents" five of which resulting in UNSC resolutions was a great feat. For the record, the last time a similar number of "Outcome Documents" was achieved in June last year.

The three main issues in front of the UNSC were – maritime security, peacekeeping and counter-terrorism. All the three are very important for India and found reinforcement not just within the Security Council but with the members at large.

Keeping in mind the importance of maritime security, not only for India but also for global trade, Prime Minister Narendra Modi chaired a high-level open debate on "Enhancing Maritime Security - A Case for International Cooperation". It was the first time an Indian PM chaired a UNSC session.

The presence of PM Narendra Modi drew Russian President Putin and President Kenyatta of Kenya who also addressed the meeting and raised the level of deliberation at the UNSC. PM Modi drew attention on how piracy and terrorism are affecting world trade and putting seafarers at tremendous risk. He highlighted the issues of maritime disputes between countries, climate change and the resulting natural disaster.

Cargo vessels crisscrossing the seas are the target and unarmed seafarers become the victims of kidnapping, captivity for an extended period and it sometimes proves fatal. Ships are exposed to the heightened threat perception when they sail from India and move towards the Suez Canal. Hence getting this resolution was very crucial.

India worked closely with all UNSC members to achieve a consensus in the adoption of the statement which included UN Convention on Law of the Sea; terrorism; piracy; freedom of navigation; arms and human trafficking; stronger regional and international cooperation amongst others.

The session on "Technology and Peacekeeping" was chaired by external affairs minister Dr S Jaishankar on August 18. This session was important due to India’s contribution over past four decades in providing peacekeepers who showed exemplary discipline and dedication. A resolution on "Protecting the Protectors" was co-sponsored by all the 15 members which was a record of sorts, more so when this was the first resolution piloted by India in four decades.

In the session on "Technology and Peacekeeping" standalone presidential statement of UNSC on the subject was adopted. Dr Jaishankar also chaired a session on the threat posed by ISIL/DAIESH which is not only a concern for South Asia but the entire region and world at large.

On expected lines, the situation in Afghanistan and the issues arising from the country dominated the month. Deft handling by India enabled a swift resolution with a clear focus on Afghan soil not to be used for exporting terrorism, departure of Afghan and foreign nationals, human rights, especially of women and minorities. While this was passed without any dissenting voices, there were no surprises when the Chinese Ambassador complained calling the resolution "non-balanced" and "forcefully pushed".

During this eventful month issues like Myanmar; Palestine; Lebanon where India is the biggest troop contributor; Iraq with a focus on upcoming elections on October 10; Yemen’s need for an immediate ceasefire and humanitarian issues especially children; Syria regarding chemical weapons; Ethiopia (TIGRAY); Somalia; sanctions on Mali were discussed and in some cases, resolutions were adopted.

Our presidency month ended with a session chaired by foreign secretary, Harsh Vardhan Shringla on August 30 on the Middle-East peace process.

As change is the only constant, the UN which came into existence after World War-II based on the prevailing condition then, is now long overdue for change. In the words of Prime Minister Modiji, “Till when do we have to wait? Till when will India be kept out of the decision making process?"