It is imperative for both nations to work together, and resolve differences through dialogue and negotiations, to maintain peace along the border areas and carefully prevent the recurrence of the events that has disrupted the serious progress made by both sides in the past two decades to develop smooth and cooperative bilateral relationship

In June 2017, India became the permanent member of the Shanghai Cooperation Organization (SCO). The inclusion of India, along with Pakistan, in the regional grouping has inflated hopes of the regional cooperation between India and China.

The Indian establishment accepted the invitation of Chinese leadership and became the member of the regional group. With the advent of complex interdependence, to leverage the benefits of economic development of advanced nations in the multi-polar world, India adopted the strategy of collaboration with all major states to possess stable relationship with all nations in the region, including China, However, during mid-2017, it was also the critical phase when India was involved in military confrontation with the PLA at Doklam trijunction region.

Indian and Chinese engagement at the SCO was critical, considering the fallout of military clashes between the two sides in eastern region of Ladakh, for shaping up developmental policies for the growth of whole region. Since India has become a full member-state of the SCO, both sides were involved in serious business activities in order to make noteworthy progress in bilateral relationship in diverse fields such as SCO University, health cooperation and counter-terrorism measures.

The significance of the SCO emerges from the notion that this international grouping comprises of India’s strategic partner – Russia, its immediate neighbors – China and Pakistan and, most importantly, the Central Asian Republics (CARs) like Uzbekistan, Kazakhstan, Kyrgyzstan and Tajikistan. Through the institution like SCO, New Delhi’s strategy was to include and enhance geo-political and strategic connections, trade and economic cooperation and people-to-people exchanges with China and other Asian republics.

The SCO became the medium for India to connect with China outside the geo-political arena of the South-Asian region. It will help India to come closer to China and eventually advance its prospects in the region. Through this medium, India and China, together, can play a constructive role in coordinating their efforts for promoting their political and economic interests through managing the Central Asian Republics. Indian membership of the SCO will definitely reform the power dynamics in the Central Asian region, specifically, and all of the Indo-Pacific region, broadly, with effects on India’s relationship with nations like United States, Japan and Australia.

The SCO is the global institution of which India and China are the members, apart from the United Nations, thus, providing diplomatic opportunity to freely express their concerns with regard to the regional security parameters. Moreover, it is a platform for bilateral dialogue between India and China for resolution of all disputes.

Nonetheless, India’s strategic vision was to leverage form its geographical position and its historical socio-cultural and trade contacts with the Central Asian Republics.

The significance of these advantages has been worth noting in India’s dealing with assertive China in the region. The full-fledged participation in this organization also assumes significance amidst the Chinese insistence on the Belt and Road Initiative (BRI) project in the Eurasian region.

Therefore, by accepting the Chinese offer to become the member-state of this organization, India has accurately held the position that it is not against any multilateral connectivity project, unless it violates territorial integrity and sovereignty.

The pro-active approach of the Indian political leadership also, markedly, deflates the notion that India is against any regional connectivity project, as in case of the BRI project; and in contrary, communicated through this diplomatic step that India is willing to engage with all the major stakeholders in the region for economic progress and overall development of the region.

The 21st meeting of the SCO Council of Heads of State, held on September 17, 2021, in Dushanbe, Tajikistan. Prime Minister Narendra Modi addressed the meeting, though virtual mode, and highlighted the prospects of radicalization and extremism in the broader SCO region, with reference to rapid fall of Afghanistan into the hands of militant organization.

Through the Prime Minister’s address, India signaled its approach with regard to the developments in Afghanistan to China, specifically, and the international community at large, and called for mutual efforts to stabilize the volatile situation in the region of which China has also become a significant stakeholder due to its close contacts with Taliban.

The economic understanding between India and China is of paramount importance for both nations, thus, both sides chose not to escalate the border tensions into a full-fledged confrontation between both Asian powers. Indian and Chinese leadership also demonstratesd their willingness to resolve immediate matters of concerns amicably and adopted conciliatory tone and tenor in the recently held meeting between the Council of Head of the States in September 2021.

There is a sense of understanding between both nations to discuss the evolving situation in the Central and South Asian region within a framework of respecting each other’s concerns related to security and strategic interests. In a major diplomatic victory for India, the SCO also called for cooperation amongst the international community in its fight against all forms of terrorism and to not support any manifestations of extremism and radicalization. It also encouraged economic integration and called for deep cooperation in health sector and other fields to enhance the member states’ capabilities in its fight against the pandemic.

Both India and China acknowledged the fact that, in 21st century, collaboration is the only ‘way forward’ in their efforts to strengthen their relationship. Indian perspective with regard to the relationship with China has been clearly stated by the Minister of External Affairs, Dr Jaishankar, in his address during his meeting with the Chinese delegation, said, ‘India-China ties are indispensable and that India does not want clash of civilizations.’

It is imperative for both nations to work together, and resolve differences through dialogue and negotiations, to maintain peace along the border areas and carefully prevent the recurrence of the events that has disrupted the serious progress made by both sides in the past two decades to develop smooth and cooperative bilateral relationship.

Hence, the global forum like – Shanghai Cooperation Organization – plays the notable role in establishing close contacts between India and China and provides opportunity to jointly respond to the international challenges within the broad framework of mutual respect and coordination amongst each other to maintain peace and stability in the Asian region. 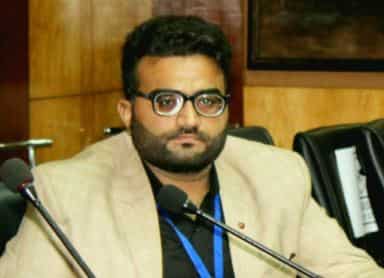