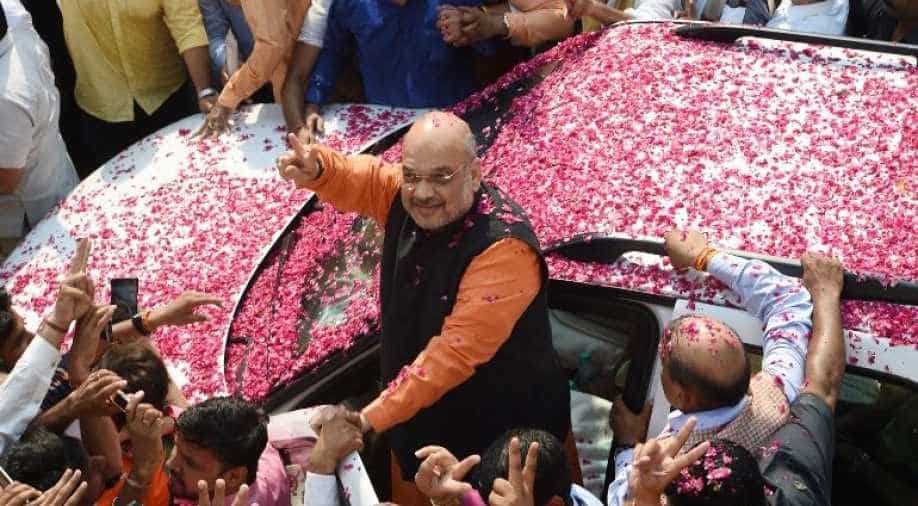 The BJP inspiration has been reinterpreted as support to Hinduism as opposed to Hindutva.

Home Minister Amit Shah, at a media house summit recently, said he joined the Bhartiya Janata Party (BJP) when it had just two seats in 1980-1981. He did so based on his ideological convictions. His English professor of the time wondered how he had chosen a political party that involved more or less the task of pasting posters on the wall.

Today, some forty years later, his ideological convictions have not changed, even though the landscape of political power is much altered.

With two successive terms at the Centre, a substantial majority in the Lok Sabha, and sufficient support in Rajya Sabha, even from political parties outside the National Democratic Alliance (NDA); the BJP has implemented major items on its long-standing to-do list.

This has put the old order on the back foot. Having failed to prevail in Parliament, they have decided to take matters to the 'people' on the street.

The road ahead under the BJP, promises to continue with the implementation of several other outstanding issues such as the Uniform Civil Code (UCC), which will put all the citizens of India on an equal footing with no special provisions for any minority.

And lately, based on a substantial pressure on the resources of the country, with over 1.3 billion people, and its relatively low per capita income - The Population Control Law.

The compilation of the National Population Register (NPR), already underway in some states, is a census between other censuses. This is to be followed by the implementation of the law entitled the National Register of Citizens (NCR). This latter is designed to identify and remove illegal immigrants from the voter lists, at a minimum.

After the Delhi elections recently concluded, it is clear that the model for a section of the broader opposition, including the much diminished Congress and the victorious Aam Aadmi Party (AAP), now with national ambitions afresh, may change somewhat.

A combination of populist measures, within a highly publicised 'development model' that focuses attention on basic health, primary and secondary education facilities at government schools, provision of electricity, water, pollution, street lighting, and other similar civic necessities may become more widespread. This is expected to enthuse the young voter, women who run their households with limited means, and those who receive the largesse of free items. These sections have voted strongly for the AAP.

In addition, because of the monolithic pattern of voting practised by it, the concerns of the Muslim community will be given pride of place. This is already the case, most prominently, in West Bengal, which has a large minority population at some 30 per cent of the total. Delhi, by contrast, today has only 12 per cent. However, this is a reliable vote bank for both the Trinamool Congress (TMC) in West Bengal and the AAP in Delhi.

The AAP has taken some pointers from the TMC as well as others from the BJP itself. The BJP inspiration has been reinterpreted as support to Hinduism as opposed to Hindutva. The effort, which seems to have worked, was to seize part of the BJP’s thunder as the party for Hindus.

While people are naturally free to vote as they please, and indeed peacefully protest whatever laws they don’t like, it becomes worrisome when they break quite a few laws themselves in the process.

This includes providing a platform for blatant sedition, squatting on a main arterial road at the expense of a large number of people, indulging in the destruction of public and private property, arson, violence.

It is also of concern when that support extends to opposing democratically debated and passed laws in Parliament such as the Citizens’ Amendment Act (CAA).

The anti-CAA protestors, in Delhi and other parts, simply want the law rolled back. And, apparently, nothing short of repeal will satisfy them. This despite the support the law enjoys from some 70 per cent of the population, according to a recent survey.

The protestors insist it is discriminatory on the grounds of religion and therefore anti-constitutional. The Supreme Court (SC), is expected to pronounce on its validity in the not too distant future but is unlikely to call for its abrogation.

It is increasingly clear that the minority community does not, and will not, vote for the BJP with the exception of some women grateful for the enactment of the Triple Talaq Act, and possibly, some Shia. The Shia, along with other smaller sects, are a minority within the minority.

This divide too is ideological, because the BJP is seen as the party of the majority Hindu community. Its stated objective of Sabka Vikas is not believed. The polarisation, long existent, but now out in the open, is along religious lines on both sides. The new issue is an apprehension of challenges to the status quo that has long favoured the minorities.

The BJP is determined to create a level playing field and enjoys broad support in this endeavour. The only people who don’t want this are those who have benefited from the old order, the partisan interpretation of secularism, and the voting patterns it has elicited in their favour.

But the electoral challenge that the recent AAP landslide in Delhi represents may need a strong economic response to bolster the BJP’s appeal. The Hindu voter may decide against making a meal of ideology alone going forward.