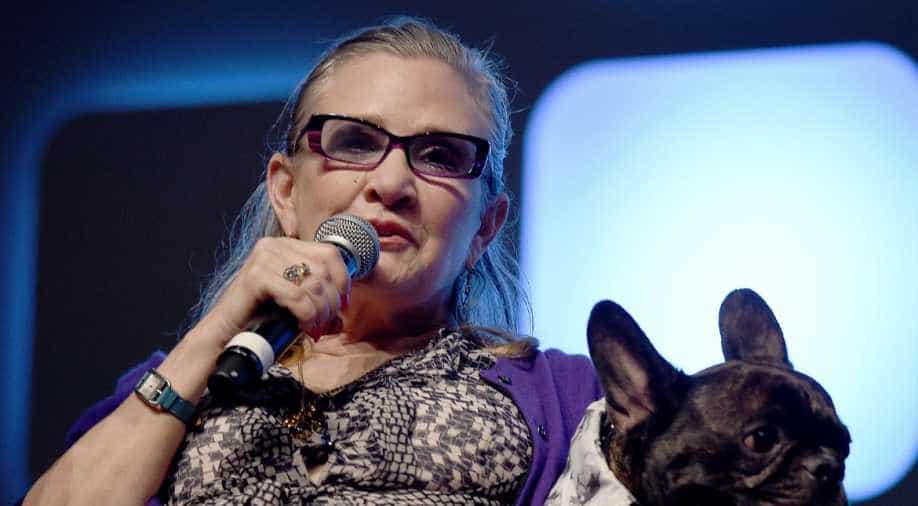 Fisher has given various interviews over the years about her diagnosis of bipolar disorder and addiction to prescription drugs and cocaine, which she admitted using on the set of 'The Empire Strikes Back' (1980). Photograph:( Getty )

Hollywood star Carrie Fisher was spending Christmas Eve in intensive care after suffering a massive heart attack near the end of a transatlantic flight.

The 60-year-old "Star Wars" actress was preparing to land in Los Angeles around midday Friday (2000 GMT) when she went into cardiac arrest, and was given CPR by an emergency responder on board.

She was removed from the emergency room to an intensive care unit at UCLA Medical Center on a ventilator, her brother Todd Fisher said late Friday.

He has been giving regular statements on her health but was unavailable to update the condition of the actress Saturday morning.

"She's obviously a very tough girl who's survived many things. I encourage everyone to pray for her," he told ABC7's Eyewitness News shortly after she was admitted.

Harrison Ford, who played swashbuckling smuggler Han Solo opposite Fisher's Princess Leia in the original "Star Wars" trilogy and last year's "The Force Awakens," said he was "shocked and saddened" in a statement released to the press on Saturday.

"Our thoughts are with Carrie, her family and friends," he added, describing Fisher as a "dear friend."

She was catapulted to worldwide stardom as the rebel warrior Princess Leia in the original "Star Wars" trilogy, which has been a cultural phenomenon since the release of the films from 1977 to 1983.

Fisher's "Star Wars" co-stars led tributes as Hollywood reacted with shock to news of her collapse.

"As if 2016 couldn't get any worse... sending all our love to @carrieffisher" tweeted Mark Hamill, who plays her on-screen twin Luke Skywalker in the "Star Wars" saga.

There were also posts from "Warwick Davis, who appeared in various "Star Wars" theatrical and straight-to-TV movies, Peter Mayhew, who plays the Wookie Chewbacca and Gwendoline Christie, who played Captain Phasma alongside Fisher in "The Force Awakens."

The American actress has talked and written frequently about her years of drug addiction and mental illness.

Fisher is known for her searingly honest semi-autobiographical novels, including her best-selling debut "Postcards from the Edge" which she turned into a film of the same name in 1990.

She has given various interviews over the years about her diagnosis of bipolar disorder and addiction to prescription drugs and cocaine, which she admitted using on the set of "The Empire Strikes Back" (1980).

She has also discussed being treated with electroconvulsive therapy, in which small electric currents are passed through the brain, to trigger brief seizures. The technique is used to treat some mental illnesses.

Fisher's famous "Star Wars" character features as part of the storyline to spin-off "Rogue One," which is currently riding high in box offices around the globe, although the actress is understood not to have been involved in the production.

Her attorney did not respond to a request for comment.