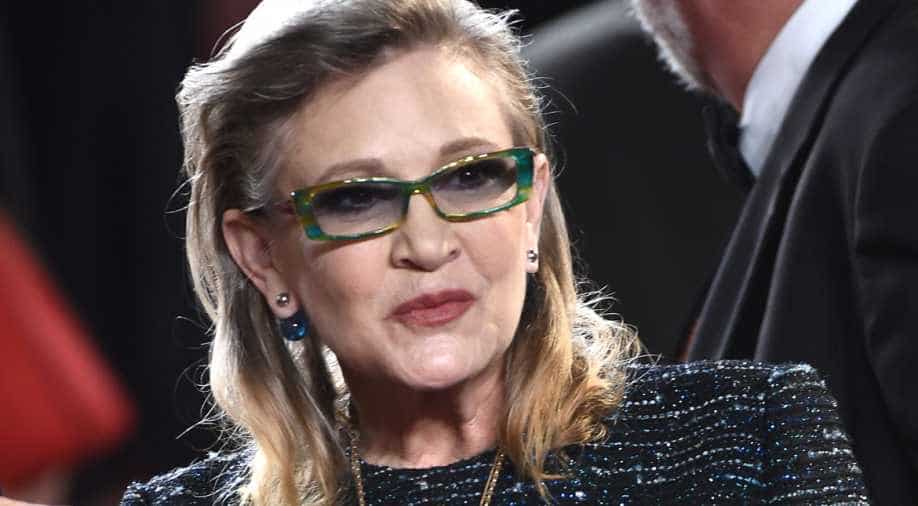 The 60-year-old actress had been in intensive care in a Los Angeles hospital after collapsing on the jetliner. Photograph:( Getty )

The 60-year-old actress had been in intensive care in a Los Angeles hospital after collapsing on the jetliner from London on Friday.

"It is with a very deep sadness that Billie Lourd confirms that her beloved mother Carrie Fisher passed away at 8:55 this morning," family spokesman Simon Halls told AFP in a statement on behalf of Fisher's daughter. "She was loved by the world and she will be missed profoundly."

Hopes had been raised for Fisher's recovery after her mother, actress Debbie Reynolds, told her Twitter followers on Sunday her daughter was in stable condition.

Fisher was catapulted to worldwide stardom as the royal rebel Princess Leia in the original Star Wars trilogy, which has been a cultural phenomenon since the release of the films from 1977 to 1983.

She had just finished filming the third season of her latest screen project, the Amazon comedy television series Catastrophe, which is set in London. She had also been on a publicity tour for her new book, The Princess Diarist, which made headlines because she wrote about a three-month affair with Harrison Ford while they were filming the original Star Wars trilogy.

Co-stars, friends and fans added their voices on Tuesday to a torrent of tributes from Hollywood for Star Wars actress Carrie Fisher, after she died of a heart attack at the age of 60. Here is a selection:

"Thank you to everyone who has embraced the gifts and talents of my beloved and amazing daughter. I am grateful for your thoughts and prayers that are now guiding her to her next stop." - Fisher's mother, the actress Debbie Reynolds

"She was loved by the world and she will be missed profoundly." - Simon Halls on behalf of Fisher’s daughter, Billie Lourd

I am extremely sad to learn of Carrie's passing. She was wonderful to work with. Condolences to her friends, family & fans around the world. pic.twitter.com/DGRYQYPZgO

"I am extremely sad to learn of Carrie's passing. She was wonderful to work with. Condolences to her friends, family & fans around the world." - David Prowse (Darth Vader)

"I have always stood in awe of Carrie. Her observations always made me laugh and gasp at the same time. She didn't need The Force. She was a force of nature, of loyalty and of friendship. I will miss her very much."

"I'm deeply saddened to learn of the death of Carrie Fisher. I will miss our banterings. A wonderful talent & light has been extinguished." - Star Trek actor William Shatner

"Millions fell in love with her as the indomitable Princess Leia; she will always have a special place in the hearts of Star Wars fans as well as all of us who were lucky enough to know her personally." - Bob Iger, head of The Walt Disney Company

"@CarrieFisher was a brilliant writer, actor, and friend. She was so much fun. I can't believe she's gone." - US talk show host and actress Ellen DeGeneres

Recently, Fisher was an outspoken critic of American president-elect, Donald Trump, pronouncing on the direction she believed his presidency would take, while also expressing her belief that he partakes in an illegal recreational drug.

One of the best Carrie Fisher moments ever. pic.twitter.com/kANbzjboup