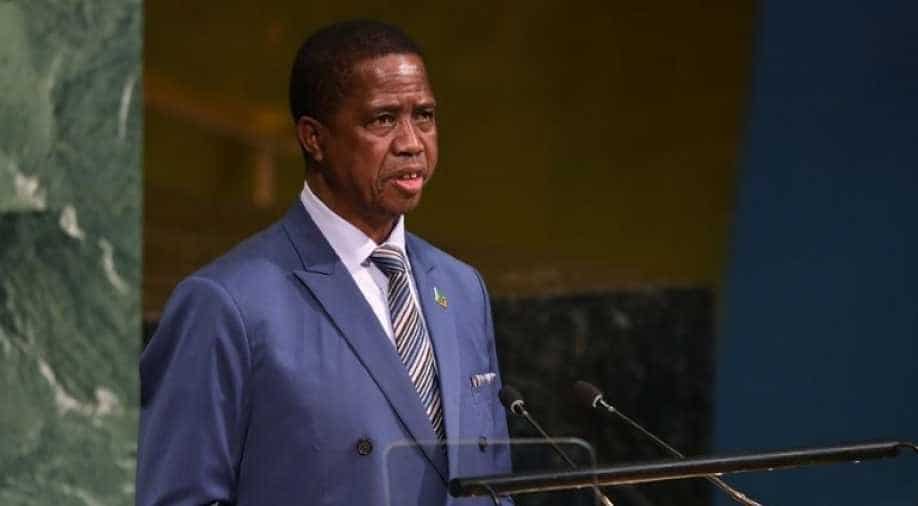 This is the first visit of any head of the state from Africa after PM Modi government took charge in May of this year.

Zambia President Edgar Chagwa Lungu will be on a three-day visit to India from Tuesday during which he will meet the top Indian leadership including President Ram Nath Kovind and Prime Minister Narendra Modi.

This is the first visit of any head of the state from Africa after PM Modi government took charge in May of this year.

"The discussion is likely to focus on cooperation in defence, security, geology and mineral resources, energy, health, education, infrastructure, culture, trade and investment-related issues. The capacity building continues to be an important aspect of our engagement with Zambia", a statement from the Ministry of External Affairs said while announcing the visit.

President Kovind had paid a visit to the southern African country in April of 2018. Bilateral trade between India and Zambia stands at $830 million dollars with India importing copper from the country. Zambia is the second-largest producer of copper in Africa.

With $5 billion investment, India is one of the leading investors in the country.

India has been providing considerable aid to the country and under the defence cooperation providing training and capacity building.

Currently, India is building the Mahatma Gandhi Convention Centre in capital Lusaka, which is the fastest-growing cities in southern Africa. A donation of $100,000 has also been announced for the renovation of Mahatma Gandhi School in Lusaka.

It is interesting to know that Kenneth Kaunda, who was the first president of an independent Zambia and was the forefront of the struggle for Independence from Britain was inspired by India's father of the nation, Mahatma Gandhi. Kaunda is referred to as "Gandhi of Africa" or "African Gandhi".

Approximately 25,000 PIOs/NRIs, many of whom are from Gujarat has made Zambia there home and has been playing a significant role in the economy. In fact, during the Movement for Multi-Party (MMD) government from 1991 to 2002, Dipak KA Patel and Suresh Desai held cabinet-level positions.

The visit is significant in the context of India's Africa outreach policy. In the last five years, India had 32 outgoing visits at the level of President, Vice President and Prime Minister and nearly 100 incoming visits of an African head of states/head of government.