Woman who entered Sabarimala barred from home, is now living in govt shelter 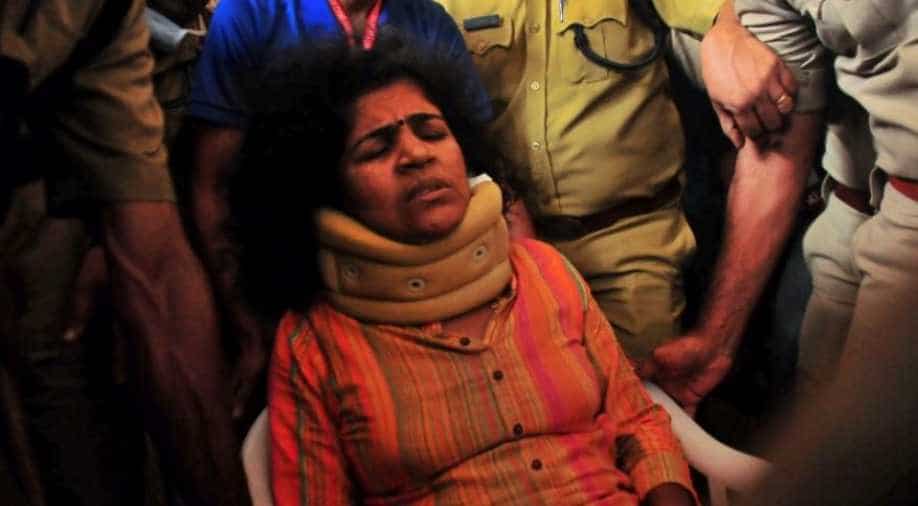 Durga, 39, a civil servant, trekked to Sabarimala along with another woman and entered the shrine earlier in January. Photograph:( Reuters )

Kanaka Durga, 39, was reportedly earlier beaten by her mother-in -law. She had to be hospitalised.

Kanaka Durga, one of the two women who had entered Sabarimala temple earlier this month, has reportedly been denied entry into her in-law's house and has now taken shelter in a government shelter home.

According to media reports, Durga, who was being treated at Calicut medical hospital after she was allegedly beaten up by her mother-in-law for defying the Sabarimala temple ban, was not allowed into her husband's house on Tuesday.

Kanaka Durga was forced to take shelter at a One Stop centre here after she found that her house was locked and her family members had shifted to another building, the local police said.

A police official said Durga filed a petition in a court in Perinthalmanna under the Domestic Violence Act, stating she had the right to stay at her husband's home, news agency PTI reported.

Police sources said Durga went to her husband's house when she was discharged from the Kozhikode medical college, where she was treated after allegedly being assaulted by her mother-in-law for entering the temple. When she reached there, she found the house locked, the sources said.

Her husband and other relatives had shifted to a rented building, the police said, adding Kanakadurga then took refugee at the One Stop Centre, PTI reported.

On January 15, it was reported that Durga, a civil servant, suffered injuries to her head and was hospitalised after being beaten up by her mother-in-law.

Durga claimed she was attacked only minutes after she returned home. She had before that spent a month at undisclosed locations fearing attacks by groups who support Sabarimala temple ban, news agency Reuters reported.

Bindu, a college lecturer and CPI(ML) activist from Kozhikode district's Koyilandy, and Durga, a civil supplies employee from Angadipuram in Malappuram, had come to Sabarimala on December 24 after 11 women activists of a Chennai-based outfit were prevented from reaching the shrine and chased away by devotees chanting Ayyappa mantras.

According to reports, the women trekked to the hill shrine on January 2. They offered their prayers at 3:45 am.