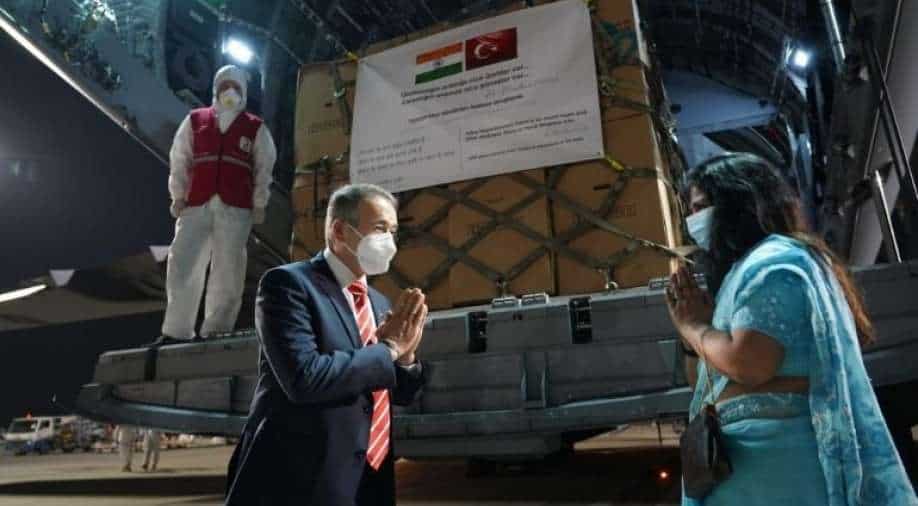 The assistance, which arrived in Delhi on two Turkish A400 Military cargo planes, the biggest in the country, brought with it 50 MT of medical supplies

Turkey has sent two planeloads of assistance to India to deal with the COVID-19 crisis, with each box having a message of Rumi written on - "there is hope after despair; there are many suns after darkness”.

The assistance, which arrived in Delhi on two Turkish A400 Military cargo planes, the biggest in the country, brought with it 50 MT of medical supplies. It included five oxygen generators, 680 oxygen cylinders, 50 ventilators, and 50,000 doses of anti-viral medicine.

The Turkish embassy in Delhi in a statement highlighted the historic role by India's father of the nation "Mahatma Gandhi who collected funds to support Turkey’s Liberation War between 1919-1923" and "and Dr Mukhtar Ahmad Ansari who led the medical mission to Ottoman Empire and set up field hospitals to treat wounded Ottoman soldiers during the Balkan Wars in 1912" as Ankara extends supports to New Delhi amid the devastating second wave of covid crisis.

This is one of Turkey's biggest assistance to any country in the world to deal with the  crisis, and was offered by the Turkish foreign minister Mevlut Cavusoglu to India's External Affairs Minister Dr S Jaishankar during telephonic talks on 26th April.

In fact, the delivery of assistance was directly overseen by Ibrahim Kalin, special adviser to the President of Turkey, Recep Tayyip Erdoğan. Kalin, ahead of the assistance being sent to India, spoke to his counterpart, National Security Advisor Ajit Doval.

Kalin, an influential official in the Turkish political system, said in a tweet,"We are proud to stand with the people of India in these trying times."

Turkey supports communities across the world in their fight against the Coronavirus pandemic.

We are proud to stand with the people of India in these trying times.

The two high-level conversations come even as earlier this year, foreign ministers of both countries met physically in Dushanbe on the sidelines of the Heart of Asia ministerial.

This was the first such physical meet between foreign ministers of two countries in over one and half years and seen as an "icebreaking" moment.

And here is when Rumi's message on assistance won't be lost on many even as assistance provides a window to strengthen ties which in the last few years were not in the best of shape.

While Rumi's quote directly focuses on the Covid crisis India is facing, but in the backdrop of recent engagements, the political messaging and intent is clear--to have good ties.

Both countries are members of the G20 and two important emerging economies, but with the mention of Kashmir by Turkish leadership, seen at the behest of Pakistan, a shadow was cast on ties.

The rapprochement comes even as FM Mevlut Cavusoglu has been reaching out to countries around the world, in what is seen as a reset of foreign policy.

Turkey's FM will be visiting Greece in June amid strained ties between both of them due to several reasons from common maritime boundaries to Cyprus. Later, he will go to Belgium. He has already reached out to Saudi Arabia and UAE. And in likelihood, a course correction with India is on the anvil with Rumi as a subtle diplomatic message.