'Will Yogi come to Tonk to campaign for Khan?' asks Sachin Pilot 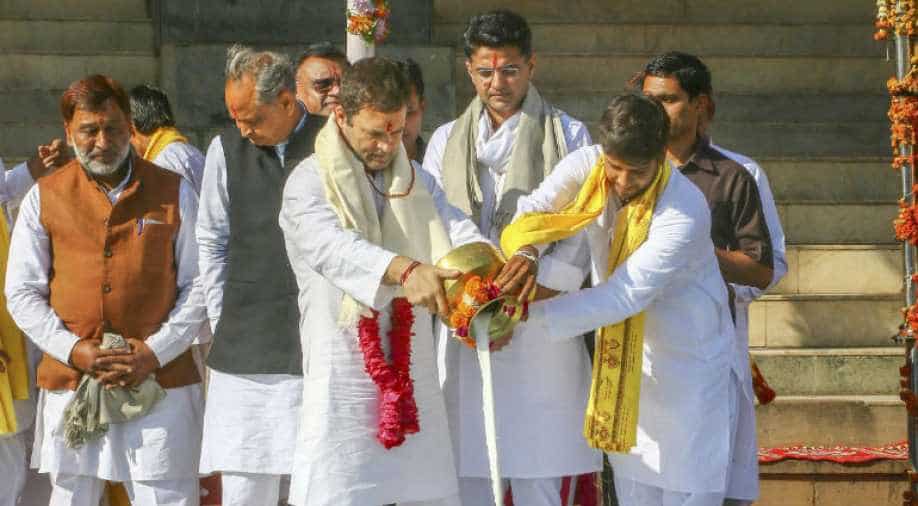 At all his election meetings, Pilot flayed the government over issues like unemployment, corruption, and farmer suicides.

Pitted against the BJP's lone Muslim candidate in the state assembly polls, Rajasthan Congress chief Sachin Pilot has a poser for the saffron party - Will Uttar Pradesh Chief Minister Yogi Adityanath come to Tonk to seek votes for Yoonus Khan.

On his campaign trail covering nine panchayats and the city throughout the day on Wednesday, Pilot accused the BJP of playing politics of caste and religion.

In his campaign speeches one after another in Tonk, Pilot is pitching his electoral contest with Khan as a battle of ideologies and not of individuals.

The state Congress president, who is fighting his debut assembly election and that too from a seat outside his regular parliamentary constituency, is drawing massive crowds at meetings in urban as well as rural areas and is convoy is forced to stop every now and then by people wishing to garland him and those raising slogans in his support.

The city is also abuzz with talk of a CM probable contesting from this town, who his supporters feel could usher in major development works in the city which lags behind in infrastructure and facilities.

"Be it Yoonus Khan or Chenghiz Khan, it doesn't matter. Pilot will win the polls," said Jagdish from Mor Bhatiyan village where Pilot rode a bullock cart in a show of people's affection towards him.

Another supporter at the gathering, Meghraj, said Pilot's win was a foregone conclusion and he would also be the chief minister of Rajasthan.

During his campaign on Wednesday, people in villages welcomed Pilot in novel ways - from making him ride a bullock cart and a rath to weighing him with fruits. Pilot happily obliged and also asked the people of Tonk at all his meetings to ensure that his victory margin is the biggest in the state.

Beginning his day's campaign with Ariyali gram panchayat, Pilot moved from one panchayat to another and at all meetings launched a scathing attack on the Vasundhra Raje government.

"There is a BJP government at the Centre and in the state. People had hoped for development. But it makes me very sad that for the first time (in the state) farmers had to commit suicide. This is a blot on our society," he said at Ariyali.

"Are you getting urea? Prices are skyrocketing, petrol and diesel prices are also touching record heights. How much does a gas cylinder cost now? It costs Rs 1,000," he said.

At all his election meetings, Pilot flayed the government over issues like unemployment, corruption, and farmer suicides.

Another common theme of his speeches is a poser: Whether Yogi Adityanath, known for his speeches with Hindutva overtones, will come to Tonk to ask for votes for Khan or not?

"He is going to various parts of the state, will he come here?" Pilot said, adding that the BJP was indulging in politics of religion and caste.

Speaking in Hamirpur panchayat in Tonk, Pilot said that after he filed his nomination papers and the BJP fielded Yoonus Khan, he was asked what would he do.

"I said I will sit back and see that whether Yogi Adityanath will come to Tonk to ask for votes for him (Khan) or not," he said to a rapturous applause.

Pilot's swipe came as the BJP's move to field Khan, who is the party's lone Muslim candidate in the state, was seen as an attempt to cut into the votes of Muslims which are about 55,000 in number.

Pilot, in his various speeches, also said the time was up for the people who were ruling from forts and palaces and it was time for the children of farmers in Rajasthan.

Another key feature of his speeches that struck a chord with the people present in his election meetings was Pilot's promise that a Congress government will ensure that surplus water from Bisalpur dam will be brought to Tonk.

In his speeches, he said that when elections come, the BJP starts talking of "mandir and masjid".

"They want to play the card of caste, community and religion, which I think is bringing down the narrative of our political debate. They are resorting to things which they know best - that is to take up divisive issues," Pilot said during his campaign.

Late evening, Pilot moved to the city for various campaign programmes - he met Bairwa community members and visited a Muslim-dominated locality and was welcomed with rose-petal shower from roofs of houses at both places.

As he wrapped up his day, Pilot reiterated his promise to transform the district and give it a complete makeover.