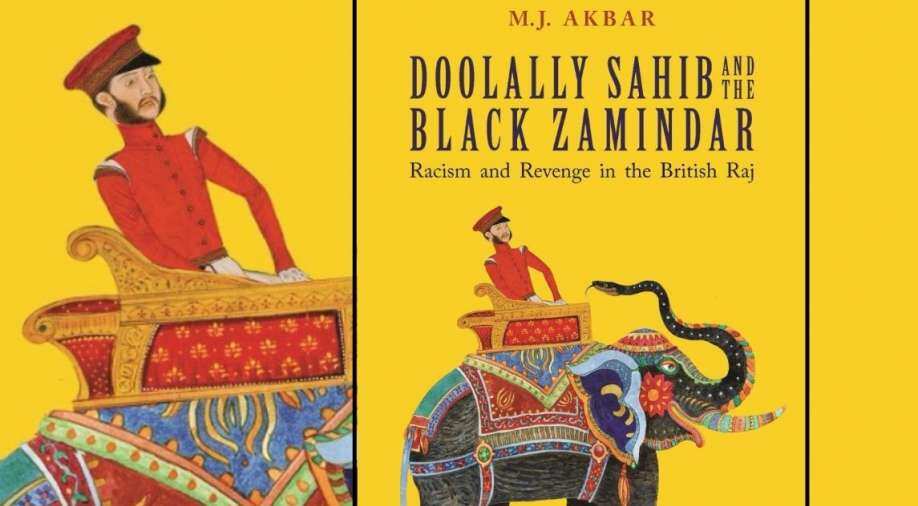 'Doolally Sahib and the Black Zamindar', the new book by Indian parliamentarian, author and eminent journalist MJ Akbar, details the racial relations between Indians and their last foreign invaders, drawing from letters, memoirs and journals of traders, travellers, bureaucrats, officials, officers and the occasional bishop.

'Doolally Sahib and the Black Zamindar', the new book by Indian parliamentarian, author and eminent journalist MJ Akbar, is a chronicle of racial relations between Indians and their last foreign invaders, sometimes infuriating but always compelling.

The book draws upon the letters, memoirs and journals of traders, travellers, bureaucrats, officials, officers and the occasional bishop.

A multitude of vignettes, combined with insight and analysis, reveal the deeply ingrained conviction of ‘white superiority’ that shaped this history.

How deep this conviction was is best illustrated by the fact that the British abandoned a large community of their own children because they were born of Indian mothers. The British took pride in being outsiders, even as their exploitative revenue policy turned periodic drought and famine into horrific catastrophes, killing impoverished Indians in millions.

There were also marvellous and heart-warming exceptions in this extraordinary panorama, people who transcended racial prejudice and served as a reminder of what might have been had the British made India a second home and merged with its culture instead of treating it as a fortune-hunter’s turf.

In these excerpts from the book, the author describes the intricacies of marital relations between the Portuguese and Indians and how the two cultures intertwined to influence the Goan cuisine.

What astonished early European contemporaries was the Portuguese willingness to marry Indian women. The reasons were practical rather than altruistic. It was an attempt to create a new loyal population through integration. Goa could be defended with forts, walls, ditches and cannon, but a long-term strategy required numbers.

Afonso de Albuquerque wrote to King Manuel that the Portuguese needed not only to build stone houses but to raise sons and daughters—with Indian wives—who would have a vested interest in Portuguese rule. This policy was approved but proved too radical for consensus and was discontinued after two years.

Social legitimacy, however, could not be so easily withdrawn in practice. Manuel’s successor, Joao III ‘the Pious’, famously ruled between 1521 and 1557 with the sword in one hand and a crucifix in the other. In 1522, Bishop Duarte Nunes advised the new king that it was a grave error to tolerate Hindu festivals and temples in Goa. In 1533, Pope Clement VII authorized the diocese of Goa with jurisdiction from the Cape of Good Hope to China and Japan, while King Joao reinforced his piety by introducing the Inquisition to Portugal in 1536. The Society of Jesus arrived in 1540. The charismatic Jesuit icon, St Francis Xavier, reached Goa in May 1542, on board the same ship as the new viceroy, Martim Afonso de Souza. The two dined at the same table.

Francis Xavier, bearing the title of Papal Nuncio, carried letters of introduction from the king to major rulers of the east. Goa’s Vicar General Miguel Vaz had already done some vigorous proselytization with the support of the government, implementing the policy of rigor de misericordia (pressure of moral force, which had been successfully used to expel Jews and Muslims in Portugal).

Xavier’s mission was to multiply the number of saved souls through conversion. He established institutions for religious administration and schools before he died on the Chinese island of Sancian in 1552. Miraculously, his corpse did not deteriorate and was

sent back to Goa in 1554, where it is preserved in the Basilica of Bom Jesus. Dr Fryer, as both an Anglican visitor and a medical doctor, was awed by the ‘Miraculous Relick’. Francis Xavier was canonized in 1622.

Portuguese policy served both God and Caesar. The church counted its blessings in numbers of new Catholics; the state needed loyalists in administration, military and trading. Privileges were granted to converts. By 1539, the five islands under Portuguese rule—Tiswadi, Divar, Chorao, Juv and Kumbarjuv—had an estimated 10,000 Catholics out of a population of about 40,000.

The converts were reluctant to abandon all aspects of their traditional or ‘heathen’ culture, a fact which grated on the priests. While drinking water, for instance, they held the vessel above the mouth in the Indian manner and poured, for touching the vessel might invite ‘pollution’. There was relentless pressure to uproot tradition, inexorably linked as it was to the Hindu faith. King Joao III ordered all temples to be razed.

The Inquisition used torture in the service of religion. Dr Fryer describes a torture machine: Going the next Morning to the Palace-stairs, we saw their Sessions house, the bloody Prison of the Inquisition; and, in a principal Market-place, was raised an Engine a great height, at top like a Gibbet, with a Pulley, with steppings to go upon, as on a Flag staff, for the Strapado, which unhinges a man’s joints; a cruel Torture. Over against these Stairs, is an Island, where they burn (after exposing them to the Multitude) all those condemned by the Inquisitor, which are brought from the Sancto Officio dress’d up in the most horrid Shapes of Imps and Devils, and so delivered to the Executioner.

Fryer was prudent enough to ask no questions. The tribunal was particularly harsh on lower caste converts who, often attracted only by the worldly advantages of adopting Christianity, maintained convivial relations with ‘Gentoo’ relatives or went to local doctors when ill. They were consigned to the flames for apostasy or sorcery. There were instances of Hindus being smeared with beef. Soldiers were ordered to disperse any multitude at a Hindu festival; idol-worship was forbidden and many Brahmins decided to sell their property and leave. Official jobs were reserved for Catholics.

During the century of intense oppression, between 1550 and 1650, the Christian population rose from one-fifth to two-thirds. High-caste converts managed to protect their privileged cocoons, retaining old surnames, marrying and socializing within their old kin, creating a Catholic Christianity with Hindu characteristics.

Edicts were often ignored rather than resisted—the church had to keep renewing its list of taboos. Try as they might, the authorities could not force people to end their reverence for the cow. When temples were destroyed, worshippers hid their deities or sent them to a sanctuary outside Goa, bringing them back to the village annually to display their true fealty. There were economic reasons as well for the survival of Hinduism—a mass departure of Hindus would have led to scarcity in farm labour, artisans and sailing crew, thereby undermining the colonial project. Business required existing expertise. Merchants, tax collectors and bankers were Hindus, while most contracts were handled by the elite Saraswat Brahmins.

The Goan Indian kitchen, allied with clothes and manners, won a splendid victory over any attempt at ostracization or European snobbery.

In her fascinating study of food and colonial culture, Lizzie Collingham writes: When the Dutchman Jan Huyghen van Linschoten arrived in Goa in September 1583, almost a century after Vasco da Gama landed at Calicut, he was surprised to discover the wives of the Portuguese eating Indian food. A typical meal was boiled rice with a thin watery soup poured over it, salt fish, mango pickle, and a fish or meat sauce. These were dishes strange to a 16th century European whose staple diet was wheat bread and roast meats. Not only did the Portuguese in India eat unfamiliar food, they ate it with their hands in the Indian manner. Indeed, the women laughed at anyone they observed using a spoon.

The Portuguese were equally flexible in dress and personal habits. Adds Collingham: Many of the Portuguese settlers had adopted a variety of Indian habits. The men had discarded their tight knee-length hose for ‘a sort of breeches, called Candales, the like whereof I never saw in any part of Europe; for when they are ty’d they leave something like the tops of Boots on the Leg. Others under a short Doublet, wear wide silk Breeches; and some have them hand down to their Ankles’. Even more peculiar, they regularly changed their underclothes. In Europe, it was customary to rub oneself down with one’s old linen underclothes before putting on a fresh undershirt, and a bath was out of the question.

In contrast, the Portuguese in India were scrupulously clean. Besides regularly changing their linen, they took a bath at least once, and sometimes twice, a day. Nor did the women ever fail to wash ‘as often as they ease themselves or make water, or use the companiesof their husbands’… The women observed purdah, and wore veils when they went outside. Although the wealthy hung themselves with ‘jewels, and rosaries of Gold and Silver many times double’, to indicate their Christian faith, they wore Indian clothes: thin, almost transparent, swathes of material above the waist and petticoats, bare legs and colourful slippers below… the wives were said to spend their days idly chewing betel nut, and washing and rubbing themselves with sweet-smelling perfumes and sandalwood. These were all practices,

Linschoten observed, they had learned and ‘received of the Indian Heathens, which have these customs of long time’. Despite the ruthless demands of the Inquisition, which began to peter out towards the second half of the 18th century, the Portuguese were more comfortable with eastern culture than the English who followed them, perhaps because they understood the east far better than north Europeans. Portugal was ruled by Arab-Moor Muslims for more than five centuries, between 712 and 1249.

Goan fishermen found an effective way to keep churchmen content: the best of the daily catch was reserved for priests. Food was a synthesizer, if not an equalizer. Portuguese-Goan cooks used toddy, in the absence of yeast, to ferment dough, adding to the repertoire of a staple like bread. The Bebinca cake was made from milk, eggs and jaggery, a local substitute for sugar. They introduced confections like the marzipan, tart and Florentine. The spicy vindaloo was a meat preparation, a chilli-soaked variation of carne de vinho ealhos, or pork cooked in wine vinegar and garlic. The fame of Goan cooks spread.

John Ovington records in 1689 that the East India Company kitchen in Surat had an Indian and a Portuguese cook in addition to an Englishman. This eclectic popularity became more mainstream when the British took along Goan cooks to their Raj in 1814 at the end of their friendly occupation of Goa during the Napoleonic wars. Lizzie Collingham writes that by the middle of the 19th century: Goan cooks were especially sought after… These cooks introduced vindaloo into the repertoire of Anglo-Indian curries… Goan cookery books referred to it as a ‘Portuguese curry’. For the British, the Goans applied the techniques of vindaloo to all sorts of meats, with duck being the favourite.

By the 1920s a Goan cook had become a marker of status…The Goans had preserved the Portuguese talent for magical desserts and the British enthused over their chocolate fondants and sugar-coated fruits. A classic Anglo-Indian dish known as beveca, made from sugar, rice flour, coconut cream and rose water, was a simplified version of the Goan layered coconut cake, bebinca.