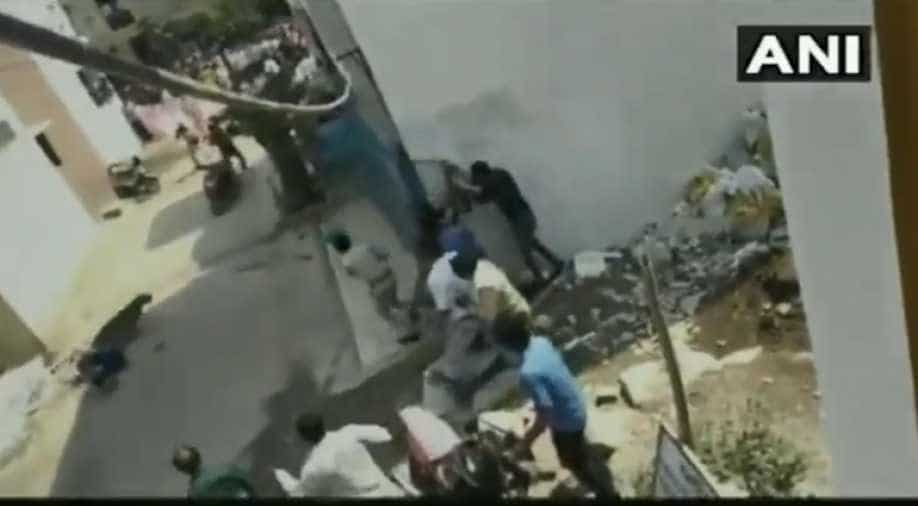 The leopard, after being put under a trap, attacked the SDO (forest) and rushed to the Patodi residence where it sat for hours on the stairs. Photograph:( ANI )

Tension prevailed at Indore's Palhar Nagar area on Friday morning when a leopard strayed into the locality and injured four people.

The leopard was spotted at a construction site and later, it entered the house of a local businessman. The big cat sat there for about three hours and attacked people in the vicinity.

Officials from the local zoo reached the spot even as panic prevailed in the locality.

The forest officials spread a net to capture it, but sensing the trap, the beast jumped outside and attacked SDO (forest) RC Choubey and ran towards Patodi residence where it sat for hours on the stairs.

The forest department initially fired two shots at the animal but both the pellets missed the target. The third shot hit the leopard. The tranquilizer used in the process was given according to the size of the leopard but it was insufficient,” reports said quoting zoo in-charge and veterinarian Uttam Yadav said.

The big cat then attacked another member of the forest department and again went inside the house where he was given another shot of tranquilizer.

Half-an-hour after the second dose, the leopard became unconscious and was trapped in a steel cage by the forest officials who carried it away from the locality amidst loud cheering from the local residents.