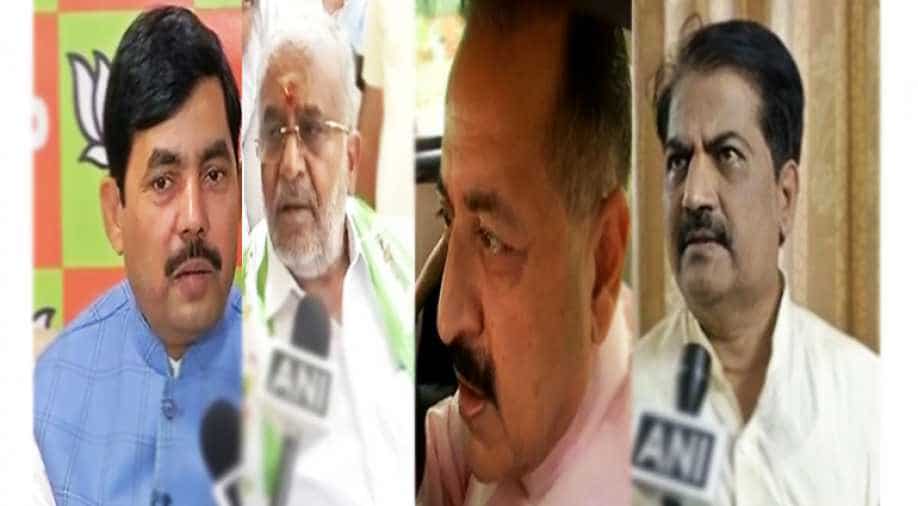 The counting of votes began on Tuesday morning for the recently concluded Karnataka elections and as per latest official trend, BJP leads in 113 constituencies while Congress in 67. JD(S) ahead in 40 seats. Photograph:(ANI)
Follow Us

Now that it is clear that the Congress will fall short of majority in Karnataka, the BJP has already taken to streets in full rigor while celebrating its win.

The counting of votes began on Tuesday morning for the recently concluded Karnataka elections and as per latest official trend, BJP leads in 113 constituencies while Congress in 67. JD(S) ahead in 40 seats.

Karnataka Chief Minister Siddaramaiah was on Tuesday trailing in both the constituencies where he contested, officials said.

The Congress leader, who had contested successfully from Chamundeshwari constituency in the 2013 Assembly elections, was way behind G.T Deve Gowda of the Janata Dal-Secular by over 13,000 votes, Election Commission officials said.

While BJP chief ministerial candidate B S Yeddyurappa leads in Shikaripura by over 9,000 votes.

Also, party leader Mallikarjun Kharge said on Tuesday that an alliance with the Janata Dal-Secular or JDS was possible. He said he will discuss the possibility of an alliance with HD Deve Gowda's party with the high command.

BJP workers celebrate outside party office in #Delhi as trends show the party is set to win #KarnatakaElectionResults2018. pic.twitter.com/uOznAJ6A7E

Several party leaders and ministers took to Twitter to congratulate and express their views on the Karnataka election results while some conveyed delight others took no chance to lash out.

Congratulations to the winners of the Karnataka elections. For those who lost, fight back. If Congress had gone into an alliance with the JD(S), the result would have been different. Very different

Rahul Gandhi did his best, but it is we who have lost the elections. We, the local leadership, should have en-cashed it in a proper way & because of which we lost it: DK Shivkumar, Karnataka Minister on #KarnatakaElections2018 pic.twitter.com/mTUCbrfO0V

I am saying it from day 1, there is no political party in India which has not raised questions on EVMs, even BJP has done it in the past. Now when all parties are doubting EVMs then what problem does BJP have in conducting polls through ballot?: Mohan Prakash,Congress pic.twitter.com/t70xtsaHoX

This is a historic win for BJP. I want to thank all the people of Karnataka for voting for us. Ab desh mein Congress khojo abhiyan chalega, kahaan rahegi pata nahi: Raman Singh, CM of Chhattisgarh. #KarnatakaElections2018 pic.twitter.com/Fc9tao6paN