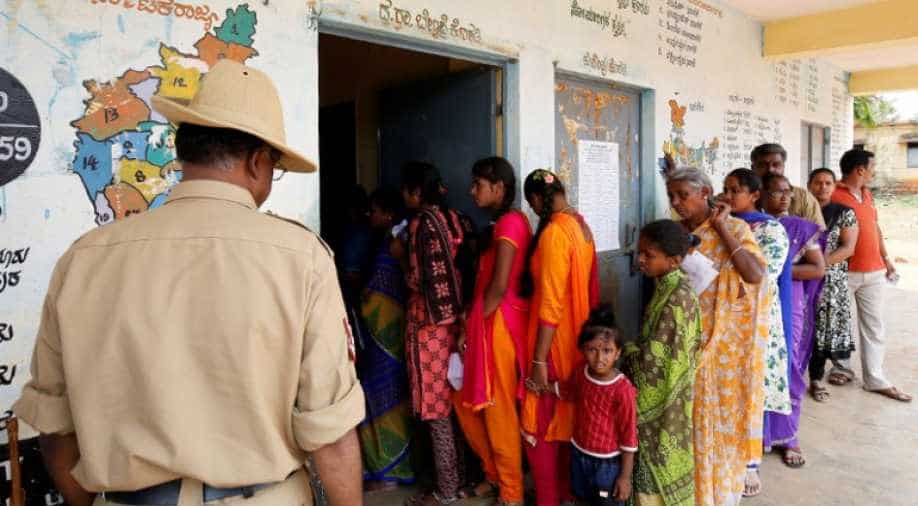 A policeman stands guard as voters wait in a queue to cast their ballot outside a polling station during Karnataka assembly elections at a village on the outskirts of Bengaluru. Photograph:(Reuters)
Follow Us

Women and young voters exercised their franchise in large numbers yesterday, bringing the turnout to 72.13%

The 72.13 per cent voter turnout in the Karnataka Assembly elections is the highest since the 1952 state polls, chief electoral officer Sanjeev Kumar said today.

"The voter turnout in the polls broke all records last night. By midnight, the figures showed that it was 72.13 per cent," he told PTI in Bengaluru, adding that the turnput was the highest-ever in Karnataka since the 1952 assembly elections.

Asked about the seizures in the run-up to the polls, the chief electoral officer said Rs 94 crore in cash, besides liquor worth Rs 24.78 crore and other items such as clothes, vehicles and electronic gadgets worth Rs 66 crore had been collected.

The official said that re-election would take place in a polling station at Lottegollahalli in the Hebbal constituency in Bengaluru since an electronic voting machine had developed a glitch.

The election for the Jayanagara seat in Bengaluru was countermanded following the death of BJP candidate and sitting MLA BN Vijaykumar on May 4.

The Election Commission has deferred the polls for the Rajarajeswari Nagar seat to May 28 after a massive row erupted over a large number of voter ID cards being found in a Bengaluru apartment.

The counting of votes will take place on May 15.