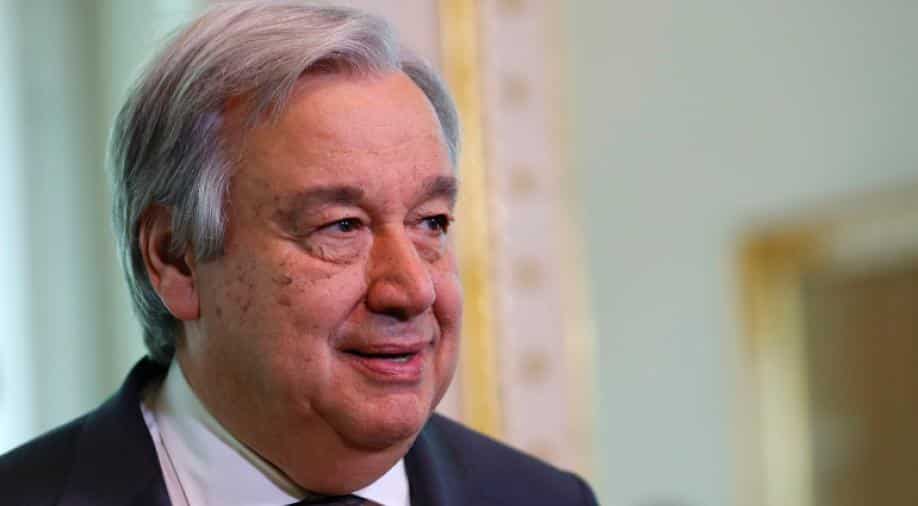 The UN Chief arrived in the country on Monday and formally inaugurated the UN House in the national capital.

United Nations Secretary-General, Antonio Guterres who is on a three-day visit to India participated in the 150th birth anniversary of India's iconic freedom fighter Mahatma Gandhi on Tuesday.

He visited Raj Ghat and laid a wreath to honour Gandhi.

The UN chief will also speak at a closing session of the Mahatma Gandhi International Sanitation Conference along with Prime Minister Narendra Modi.

He will also participate in the International Solar Alliance Assembly and a meeting of the Indian Ocean Rim Association energy ministers.

The UN Chief arrived in the country on Monday and formally inaugurated the UN House in the national capital.

On his visit, Guterres said that he was delighted to be back to Delhi and wished enormous success in the deepening of the cooperation between India and the United Nations.

During his three-day stay, he is expected to discuss key global issues such as climate change and terrorism with PM Modi. He will also meet Lok Sabha speaker Sumitra Mahajan and External Affairs Minister Sushma Swaraj along with other senior leaders of the country.

Guterres is also scheduled to deliver a lecture at the India Habitat Centre on the theme 'Global challenges, global solutions'.

Guterres had visited the country, earlier in 2016, months before his election as the Secretary-General.