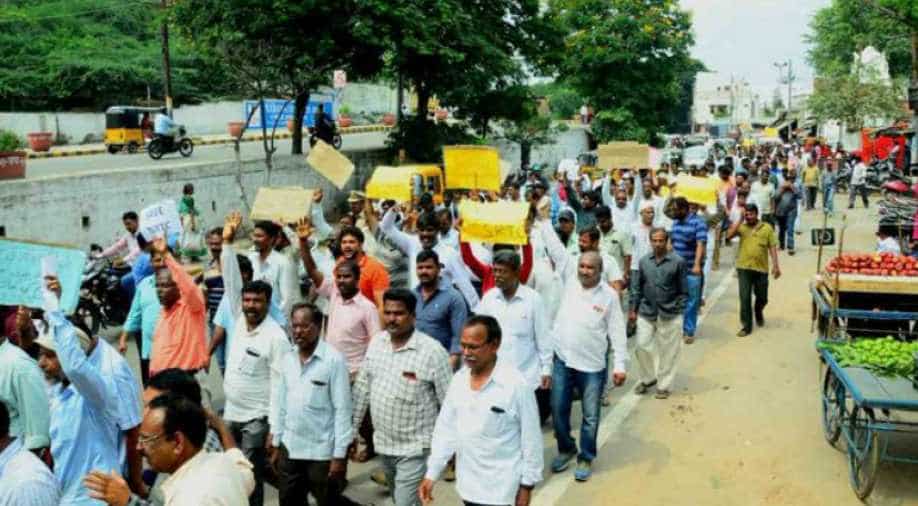 The Telangana Chief Minister`s Office on Monday issued a statement warning the striking TSRTC workers that if they fail to resume duty by November 5, the state govt will not take them back.

We have decided to boycott the Chief Minister`s deadline to join back services by November 5 and the strikes will continue, said TSRTC Joint Action Committee President Ashwathama Reddy on Tuesday here.

Speaking to ANI, Reddy said, "We are boycotting Chief Minister K Chandrashekar Rao`s call to join back services before November 5. We are going to protest in front of all RTC depot`s and later on the family members of RTC employees will also participate in the protest.''

"We also request the conductors and drivers who are performing duties with RTC to join us in the protest," he added.

Echoing similar sentiments, the Deputy General Secretary of the Employees Union, Mohammed Ahmed Ali also said that the RTC workers will not return to service without any agreement with the government."The Chief Minister is speaking as if he is a king and wants employees to join back services unconditionally. All the unions have declared that the workers will not join back services without any agreement," he said.

The Telangana Chief Minister`s Office on Monday issued a statement warning the striking TSRTC staff that if they fail to resume duty by the deadline of November 5, the state government will not take them back.

Employees of the TSRTC have been on strike for the past few weeks now.  Earlier this week, they intensified their indefinite protest against the sacking of over 40,000 employees by the state government.

During the ongoing protest, a few TSRTC employees have lost their lives either by committing suicide or depressed by the demonstration. The Joint Action Committee (JAC) of TSRTC has been on a strike since October 5 demanding merger of the corporation with the state government and revision of pays among other demands.