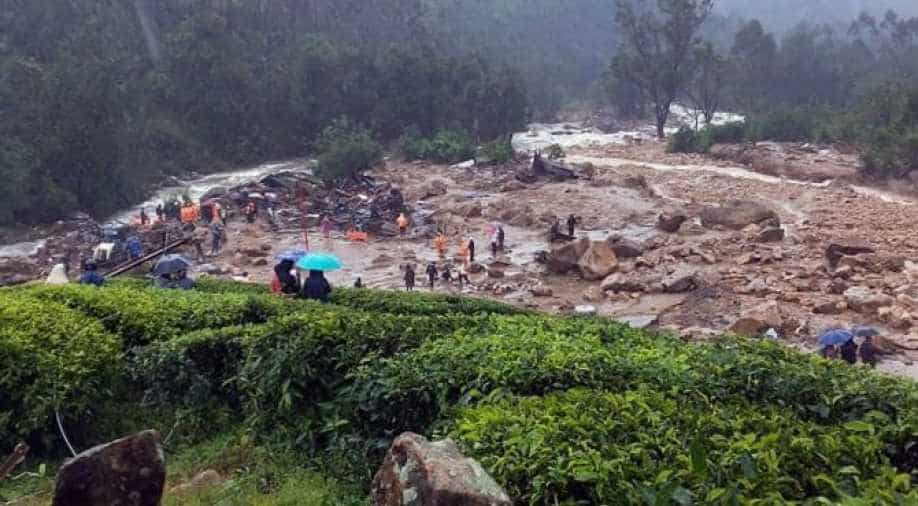 In his press meet at Thiruvananthapuram, chief minister Pinarayi Vijayan said11 bodies were recovered from the site of the landslide at Rajamala while three are yet to be identified.

The death toll in the massive landslide that destroyed a row of 20 houses of tea estate workers in the high range Idukki district of Kerala on Saturday climbed to 26 with 11 more bodies being recovered from the debris,as efforts were on amid continuing rains to locate those missing.

In his press meet at Thiruvananthapuram, chief minister Pinarayi Vijayan said11 bodies were recovered from the site of the landslide at Rajamala while three are yet to be identified.

"This is in addition to the 15 bodies recovered yesterday.This brings the death toll in the landslide at the tea plantation to 26.

Rescue operations are continuing at Rajamala in full swing.

Post-mortem of the victims is being speeded up.

An amount of Rs 5 lakh was announced yesterday as emergency assistance for those who lost their lives.
"The government will bear the medical treatment expenses of those injured in the disaster," Vijayan said.

The chief minister said 78 people were staying at the spot where the tragedy occurred.

While 12 were rescued, 26 bodies were found, he said,adding that efforts were on to find the rest.

Vijayan said the state government will support the families of the victims to enable them return to their normal lives.

"Two teams of National Disaster Response Force are involved in the rescue operations in addition to the locals, police, fire force and plantation workers.

Swamp formation due to the presence of water in the landslide area is posing a big challenge to the rescue operations," Vijayan said.

The picturesque landscape of Pettimudi was flattened into a rough patch of boulders and mud with parts of asbestos and tin sheets seen scattered around.

The incident is said to have occurred in the wee hours of Friday when a huge mound of earth fell on the "row houses" and two children and five women were among the deceased, most of whom were plantation workers from neighbouring Tamil Nadu.

NDRF chief in charge of south Indian state, Rekha Nambiar is leading the 55-member team which is entrusted with the search and rescue mission.

Meanwhile, the India Meteorological Department (IMD) has issued a red alert for Idukki, Malappuram and Wayanad districts on Sunday.

According to the State Disaster Management Authority, Kerala received an average rainfall of 95 mm in the last 24 hours while Vadakara in Kozhikode recorded 32.7 cms of rain, the heaviest in the state.

Vaythiri in Wayanad received 19.3 cms of rain while Peerumedu in Idukki district 18.5 cms.

In the four-month-long Southwest monsoon season, which began in June first week, Kerala has reported a total of 51deaths till Thursday night due to various incidents of drowning, landslides, and tree fall.