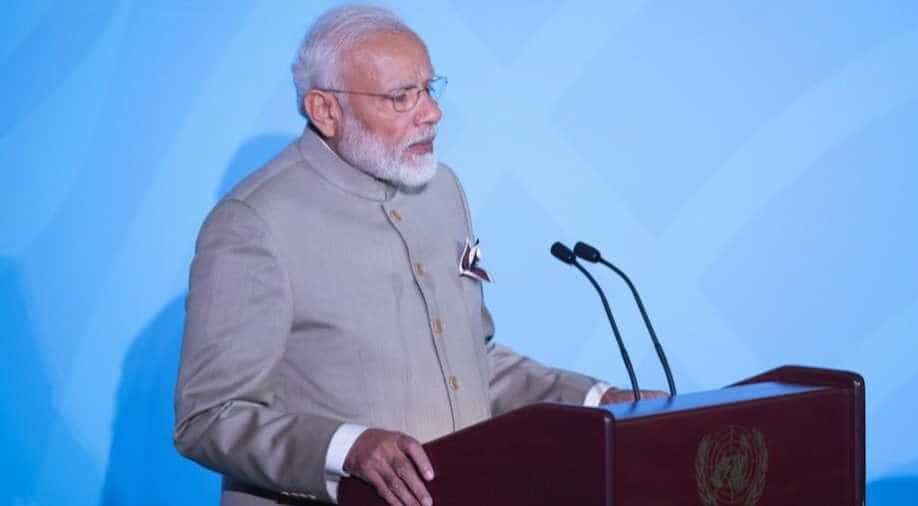 PM Modi also called for qualitative upgradation in the ongoing cooperation and intelligence sharing through bilateral and regional frameworks.

Prime Minister Narendra Modi on Monday called for global solidarity and readiness against terrorism in the same way the world has shown solidarity against challenges like climate change.

"A terrorist attack, anywhere in the world should be considered as terrorism, not good or bad terrorist," PM Modi said while speaking at the 'Leaders' Dialogue on Strategic Responses to Terrorist and Violent Extremist Narratives' at the UN headquarters in New York.

PM Modi also suggested institutionalising counter-terrorism cooperation at the multilateral level and said that terrorists should not be allowed to get funds an arms, Gitesh Sharma, Ministery of External Affairs Secretary informed in a press conference in Delhi.

"For this objective to be realised we need to avoid politicisation of mechanisms like UN listings and Financial Action Task Force," PM Modi said in the conference.

He also called for qualitative upgradation in the ongoing cooperation and intelligence sharing through bilateral and regional frameworks.

Earlier in the day, the PM addressed the high-level meeting on Universal Health Coverage and Climate Action Summit.

At the Climate Action Summit, Modi said that the time for talking is over as he announced plans to increase India's renewable energy capacity to 450 GW from 175 GW and invited countries to join the Coalition for Disaster Resilient Infrastructure being launched by India.

On Tuesday, PM Modi will hold third bilateral meet of this year with US President Donald Trump at the sideline of the United Nations General Assembly.

He is also scheduled to inaugurate the Gandhi Solar Park which is built with India's help on the roof of the United Nations' headquarters.