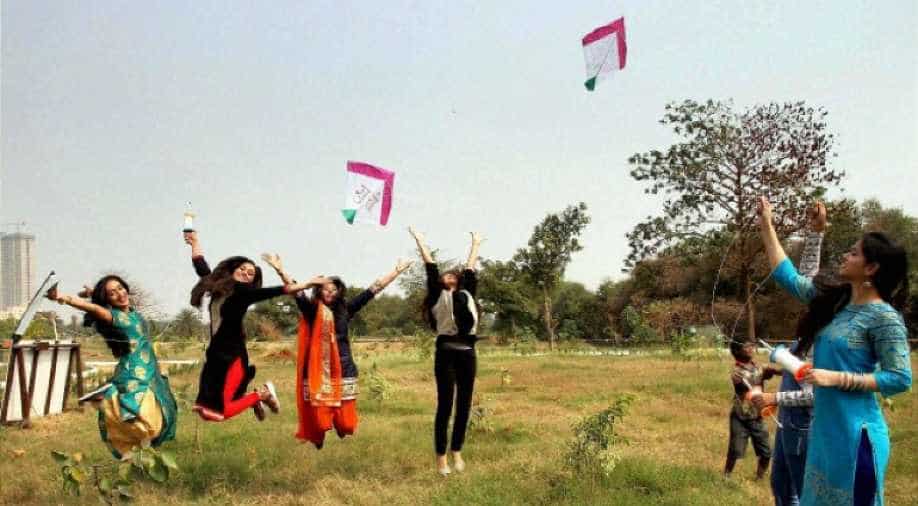 'Bhogi', the first day of the festival, was celebrated today with traditional fervour. Photograph:( DNA )

The three-day Sankranti festivities began in Telangana and Andhra Pradesh today with villages and small towns coming alive as thousands of Telugus travelled to their native places from urban centres.

'Bhogi', the first day of the festival, was celebrated today with traditional fervour.

Bhogi 'mantalu' (bonfire) were lit at dawn outside the homes. The bonfire is lit with logs of wood and wooden furniture that is no longer useful.

Discarded things at home are also thrown into the fire. The disposal of discarded things symbolises the sacrifice of old habits, vices and attachment to material things.

Traditionally, women spray cow dung and water in front of the house and draw colourful 'muggulu' (rangoli) and keep 'gobbemmalu' (cow dung balls) decorated with turmeric, kumkum and flowers on the rangoli.

In the evenings, 'Bhogi pallu' (Indian jujube) are showered on children seeking their health and prosperity.

The Telangana government is organising a 'kite festival' and 'World Sweet Festival' at the Parade Grounds here on the occasion.

People from about 25 states and some foreign countries, who live in Hyderabad, have set up stalls showcasing sweets from their respective places. However, those engaged in sweets business, like caterers and hoteliers are not allowed to take part in the event.

Children and youth took to flying kites on apartment terraces and open grounds.

The second day of the festival is 'Makara Sankranti' and the last day is celebrated as 'Kanuma', when livestock are worshipped.

The Secunderabad-headquartered South Central Railway said as many as 147 special trains are being run for Sankranti season through which 1.5 lakh additional berths have been generated.

The Hyderabad-Vijayawada highway witnessed heavy traffic as many people travelled in own cars to their destinations.