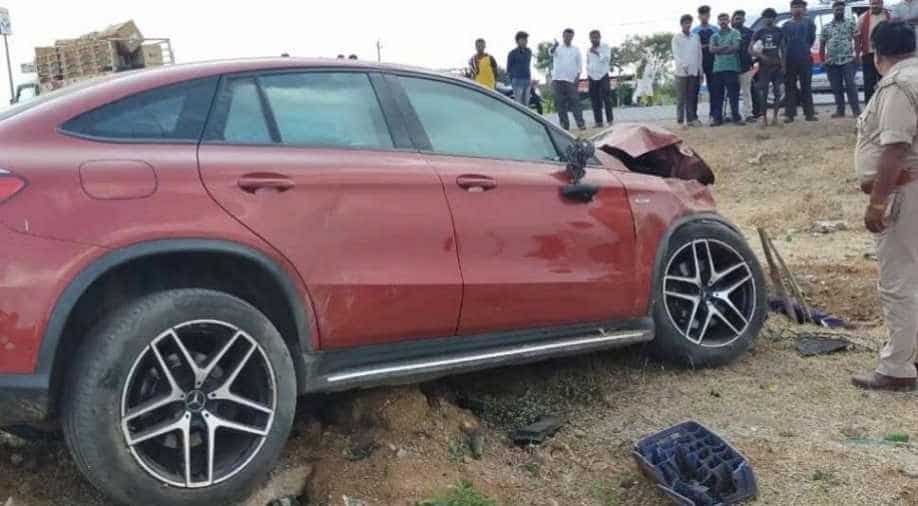 Sources claim that the car is registered in the name of a prominent chain of school and R Ashoka is associated with the school management as well. Photograph:( WION )

While two incidents took place in the heart of Bengaluru city, the IT capital of India, the latest incident is reported from Ballari district.

In the last one week, the South India state of Karnataka has witnessed three cases of rash driving - all involving luxury cars and powerful people.

While two incidents took place in the heart of Bengaluru city, the IT capital of India, the latest incident is reported from Ballari district.

On Monday, in Ballari district's Hospet Taluk, two were killed and three got injured when a luxury car went out of control and overturned on NH 50. The deceased were identified as 19-year-old Ravi Naik, a pedestrian who was sipping tea at a roadside stall and 27-year-old Sachin was inside the car. Ravi was said to have been dragged for about a 100 metres after the collision and died on the spot. The three injured have been identified as Shivakumar, Rakesh and Varun, all residents of Bengaluru. However, on Thursday Congress leaders alleged that the man behind the vehicle was Sharat, son of Revenue Minister R Ashoka.

"The incident occurred 4-days back and an FIR has already been filed. It family who lost their kin have filed a complaint against those who were present on location. The inquiry is ongoing and as a minister I have no involvement. Law is different and we respect law. Hundreds of people have witnessed the accident." said Ashoka.

Upon being asked whether Sharat was present on location during the incident the minister merely stated that he will not comment on an ongoing enquiry.

Sources claim that the car is registered in the name of a prominent chain of school and R Ashoka is associated with the school management as well. It is also being said that Sharat who was injured in the incident is undergoing treatment at home.

But this is not the only incident. Former Congress Minister NA Harris' son, Mohammed Nalapad surrendered before the police on Wednesday as he was accused of driving a Bentley that swerved out of control in Bengaluru's Mekri Circle. Three people, including a six-year-old boy were injured in the incident. Interestingly the police issued a notice Nalapad despite one Balakrishna claiming responsibility for the incident. The police said that they had evidence to prove that Nalapad was behind the wheels of the Bentley.

'We have questioned him(Nalapad) and then granted bail. Investigations are ongoing. We will collect all the required evidence against the accused.' said Dr Ravikante Gowda, Addl CP(Traffic), Bengaluru. However, Nalapad has alleged that the development is a conspiracy against him. 'If there is evidence, let them prove it. I am going to court. I will fight it out till I can. I know there are people behind this and they are trying to frame me.' said the Congress leader's son who is out on bail in a pub assault case.

Another such case of lawlessness was witnessed on Sunday when three Lamborghinis were attempting to race in the crowded Central business district of the city. A dramatic 6-second video that emerged showed the brightly coloured green Lamborghini swerve out of control and ram into a traffic police post. The man behind the wheel, businessman Sunny Sabarwal, even took a picture with the damaged traffic police post and uploaded it on his social media profile. Sunny Sabarwal is the son of a co-owner of a famous amusement park in Bengaluru.

Three different incidents, involving(allegedly) three rich kids in three luxurious vehicles. Entitled arrogance, is sure on display on the streets in Karnataka. Will these powerful culprits be brought to book?